Catching Up On: The Last Man On Earth 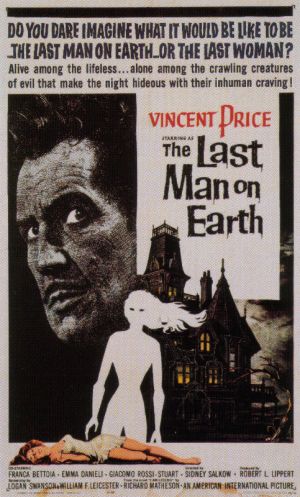 Halloween has come and gone, and with fears of The End of the World safely behind us, it is time to finally watch 1964’s The Last Man On Earth in a different light.

Before The Omega Man and much, much earlier than I Am Legend, Vincent Price owned the role of The Last Man on Earth! I truly enjoy black-and-white classic movies, old-school science fiction and The Twilight Zone. This story seems to combine them all. Vincent Price has lived alone for three years, ever since a mysterious airborne virus quickly kills everyone across the globe… everyone, that is, except Price, who believes a bat bite in Panama made him immune to the outbreak. Price cleans the streets of the zombie-like vampires by day, and relaxes at home, by night. But when he runs into Ruth Collins, he learns of a super-secret society that has survived, and will soon be hunting him!

Clearly, the movie was filmed with a limited, string budget, but throughout, lots of great instrumental music is performed. Many vampire stereotypical items are in heavy rotation, including wooden stakes, burning corpses and mirrors and garlic are both used to repel the creatures. Throughout the film, Price doesnt care to stay quiet, actually attracting the undead, But at night, Price is always preoccupied, never feeling threatened by the undead. My biggest pet peeve of the film is never addressed: How would the city’s power grid still be up and running after three years of neglect?

The story is slow at times and sometimes involves cheesy story elements, but I really enjoyed it. This movie successfully conveys a sense of hopelessness at the end of the world and spawned two remakes, including Charlton Heston’s The Omega Man and Will Smith’s I Am Legend. Reportedly, George Romero used this movie to lay the blueprints for Night of the Living Dead. And this is probably the spiritual inspiration for the film, Beneath the Planet of the Apes, which premiered six years later in movie theaters.

Strength: A vibrant, young Vincent Price in his prime!
Weakness: Not many details of the super-secret society.
WTF Moment: At the end of the world, Vincent Price has a key to every building