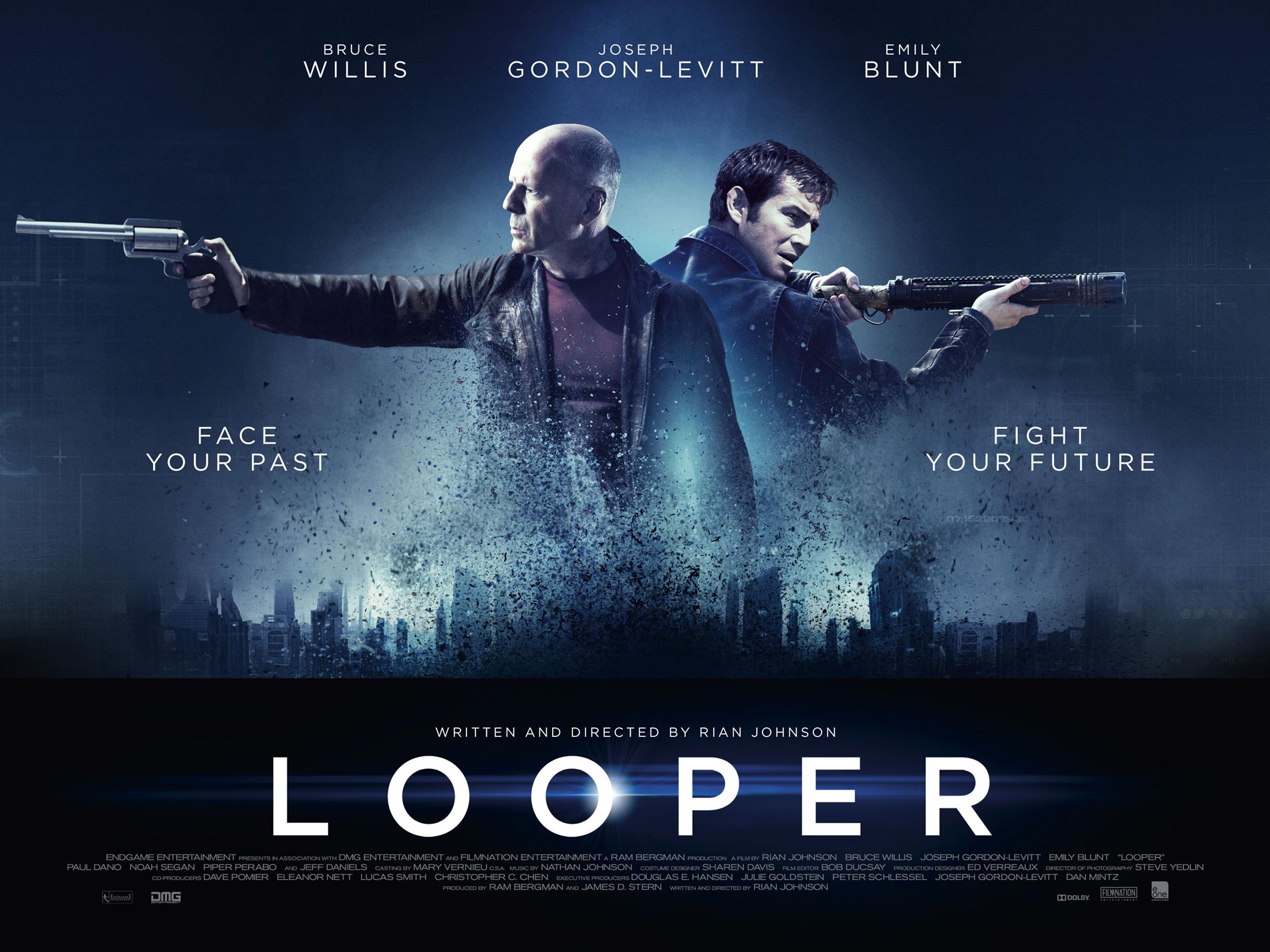 Is it possible to change the past, when you know the impending and inevitable future?

In what has to be the the best movie I’ve ever rented from Redbox in the seven years I’ve used the rental service, Looper attempts to firmly make that decision… against all odds.

In the year 2044, time travel has become a reality, and quickly outlawed. The only people who have access to it are the crimelords of the mob. Joe (Joseph Gordon-Levitt), is an assassin — also known as a Looper — working for the Mob. Once someone is targeted in the future, that person is sent back in time and killed, thus, vanishing from the future. This process is called “Closing the Loop,” and technically, that victim never existed.

Eventually, Joe’s transported target becomes himself… from 30 years in the future. Old Joe (Bruce Willis) escapes, and has a mission. “Letting your loop run” is a killable offense, and both men are on the run from the mob, fighting each other in the process. Old Joe attempts to prevent a future massacre by “The Rainmaker,” while young Joe attempts to clean up his mess, and retire to France.

There’s too many spoilers to be given, should I go into any more detail of the film’s climax. The entire movie is amazing, but the finale is epic. The different storytelling perspectives, following each character in their appropriate timelines, were amazing. Willis fights to save his future wife and return home, while Gordon-Levitt fights for survival, and possibly allowing that future to happen. I’ve never been a big fan of Joseph Gordon-Levitt. He always seems to rub me the wrong way, in the films he chooses. Whether it’s his acting (or overacting) ability or the characters he plays, I’ve never understood his popularity. With Looper, he jumps face-first into Bruce Willis’ skin… and does an amazing job, in the process! Gordon-Levitt does many similar facial mannerisms and creates a familiar personality to Willis. Having two actors portraying one character reminds me of the back-and-forth play of Face/Off, and that’s a compliment.

In the end, Bruce Willis gets far too little screentime, but eventually, he displays his wit and Die-Hard charm. The open-ended conclusion is ripe with sequel possibilities, but overall, it is a similar shade to another Willis sci-fi actioner: Four Monkeys. That is another good thing. Written and directed by Rian Johnson, I can’t wait to see what he has in store for his next movie. Looper is amazing and I can’t wait for more people to experience this superb film!

Strength: Terrific plot twists, great action and an outstanding storyline.
Weakness: Not enough Willis, a tad too much Gordon-Levitt for my tastes.
WTF Moment: Assassins of the future drive classic Mazda Miatas?

Notable Quotes:
– “This time-travel shit just fries your brain like an egg.”
– “Why don’t we just stick to services rendered?”
– “This is a precise description of a fuzzy mechanism… it’s missing.”
– “You couldn’t scare a retarded hobo with that thing. Literally.”