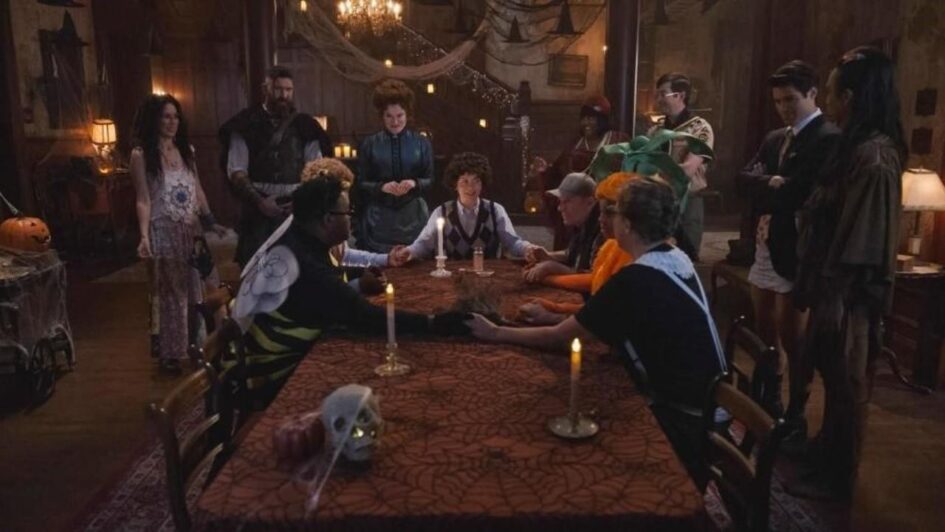 What happens when you perform a Halloween seance on CBS' Ghosts? The comedy series creates a new holiday tradition!

I’ve always been a fan of holiday traditions… especially during the spooky season. Each year, I can’t wait to catch the latest seasonal offerings of some of my favorite TV shows.

Do you remember watching Quantum Leap‘s “The Boogieman” in 1990? I sure do. It’s been a favorite for a long time (Apparently, the reboot will also offer a horror-themed episode airing on Monday night — I can’t wait!). More recently, the various holiday parties of The Office were usually hilarious and the merry pranks of Brooklyn Nine-Nine taking place every Halloween sit near my heart, but the “Treehouse of Horror” episodes sit atop my favorite small-screen shows, which is hosted by The Simpsons.

Promoted as “the biggest Halloween party of the year,” CBS’ Ghosts goes all-out in getting into the mood. Last year, the undead spirits assisted Sam (played by Rose McIver) and Jay (Utkarsh Ambudkar) in protecting Woodstone Mansion from neighborhood vandals. Much of its humor came from the ghosts’ reactions to modern-day kids pretending to be, well, like them. And it really grabbed my attention, quickly becoming one of my favorite episodes.

For the series’ sophomore season, our young couple throws a last-minute Halloween party and while performing a seance, a portal opens up, welcoming a new spirit onto the show. Apparently, the barrier separating the living from the dead is thinnest of all on All Hallow’s Eve, which is how Molly (Hannah Rose May) arrives. Molly’s got a complicated backstory, but by the end of “Halloween 2: The Ghost of Hetty’s Past,” the plot device builds a new layer onto the program’s canon. And the audience is growing along with it.

Ghosts‘ second season premiere, “Spies,” which dealt with some ridiculous Yelp reviewers, initially clocked in with 6.15 million viewers, but after seven days of delayed views, that number jumped to 9.11 million people, claiming the title of the No. 2 most-viewed comedy of the year (with seven days of viewing). That means more people than ever are tuning in to laugh at and with these spirits. Adding in a new Halloween tradition can only help grow this series.

“Someone who stalks a dead person is called a ‘historian.'”

Through five episodes, Ghosts has done a great job of balancing callbacks to last season and making new additions. The bed and breakfast gains some momentum with its recent guests and past truths are revealed in “Alberta’s Podcast.” A squatting cult reveals Jay’s need to find friendship among the locals (which is difficult, since so many are much older), which then leads to the Karen protests involving “The Tree” (probably the funniest episode so far).

Loneliness among others may be an ongoing theme moving forward with these characters (both dead and alive).

The livings seem to be on a roll so far with this show. I’ll happily admit to being a fan of this network comedy (which surprised me). Hopefully, this Halloween tradition will only grow bigger and better. And maybe some of the other holidays will eventually get incorporated into the ongoing storylines.