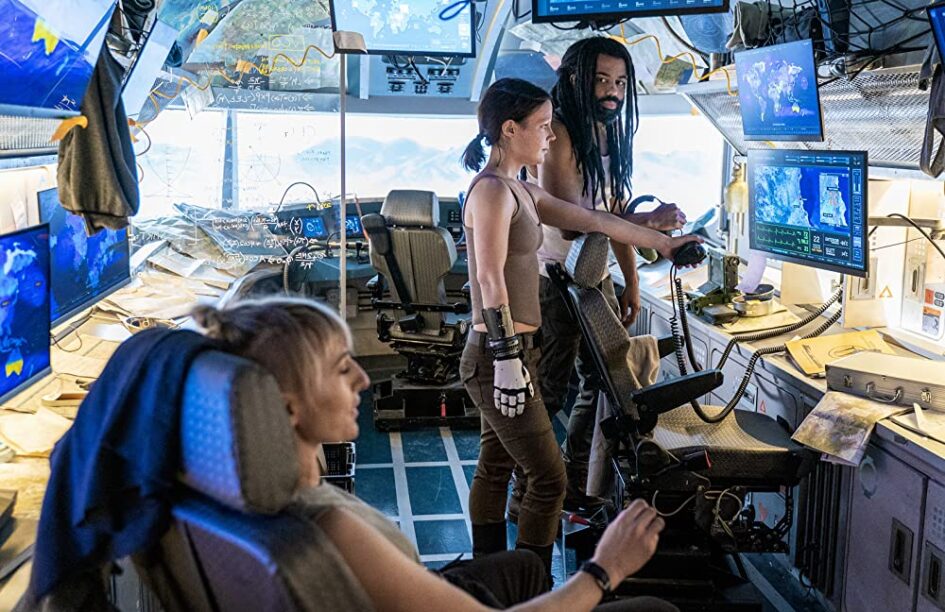 The planet’s become an ice cube. Humanity’s hopes rest with not one, but two perpetual-motion trains and their inhabitants. The season premiere brings some intriguing new story elements into Snowpiercer‘s third season, and I keep wondering how I might live in a post-apocalyptic dystopian future. But after watching “The Tortoise and the Hare,” it seems the show has shifted its focus onto the chain of command. Who’s really in control here? And why do I really care?

Picking up the pieces from last season (Even During a Nuclear Winter, Power Corrupts), the planet’s only survivors have been bickering for far too long, now. If you thought everyone would be merrily singing kumbaya, holding hands and working together for a brighter future, you never watched the original Bong Joon Ho feature film, which this show is based upon.

In the beginning, it used to be all about social commentary on the class system and the need to take up arms for a brutal class warfare. Now, everyone’s a part of the working class and yet the in-fighting has only ratcheted up a notch.

If this future is inevitable, I’m gonna live my best life now, because I don’t want any part of what may become.

OK, there’s two trains with two chapters to tell. One is led by its power-hungry creator, willing to combine the two at all costs, while dividing its riders among First Class and everybody else. The other life raft includes the resistance, which hopes to unite its people while conserving energy and possibly finding an unknown life-supporting oasis, where they can disembark forever. But there are quite a few obstacles left that must be overcome before reaching their goal.

While examining soil samples to find a forever place to live, one of the trains actually stopped for the first time, but not without near-disastrous consequences. When one of the scientists falls into an abandoned, snow-covered building, half of the episode becomes a rescue mission in a fight against time. The other portion involves the cat-and-mouse games of finding the traitors within a confined space. These hide-and-seek sessions are deadly, to say the least. But don’t forget the awkward flash forwards and the foreshadowing…

Off-train adventures don’t happen too often, so this plot device was a very nice change of pace from the claustrophobic sets that are usually quite effective. The introduction of a mysterious new character who somehow lived out in the wilderness for so long is intriguing, but where’s the TRUE star of the show?

Jennifer Connolley’s Melanie was effectively written out of the show last year, but for some reason, I’m STILL expecting her to magically appear, at least for an episode or two, just to shake things up one last time. I mean, it’s not often your show’s protagonist becomes its antagonist, survives an impossible death in order to somehow save the day again, right? This is Soap Opera Sci-Fi 101.

I’m really not a fan of the extreme close-ups used by the crew’s handheld cameras. As one who quickly suffers from motion sickness within a few rocking motions, I’ve long complained about shaky camera operators attempting to lure viewers into their storyline. I just wish the process was used less in this show.

The Laytonites continue to follow “the Savior” from The Tail, but for how long? A soon-to-be-delivered newborn will be brought into this madness and the chain of command contempt will continue. As soon as the TV show departs its original source material, it almost feels like it’s magically returned, like that side storyline never happened. That would be commendable.

I did lose interest in the show last season, and I’m intrigued for its future possibilities, but the flash forwards almost turn this show into a LOST clone. I’m hoping that doesn’t happen, but I also don’t want to see more endless fighting among the 1,023 cars, either.

Here’s to hoping the airborne contaminants soon disperse and everyone lives happily ever after.