Choose Wisely: A Review of The Chosen 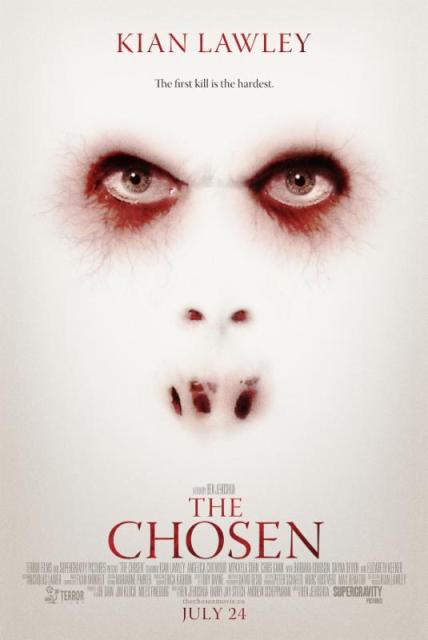 Continuing my conquest to find inspiration for the upcoming haunt season, I decided to check out the Netflix offering known as The Chosen. Choosing wisely is sometimes hard, when it comes to the smorgasbord of films online. It takes a catchy film idea to get my attention and this one caught it.

The story is pretty basic. The Chosen centers on a teen named Cameron (no last names are ever given). Cameron’s family life is tumultuous, at best. His mom is taking care of an extended family, including his niece, Angie, grandparents and slacker brother, Joe. Cameron’s sister, Eliza, is a recovering drug addict who lost her son to an accident and is not allowed around Angie. But, Cameron, being the guy he is, decides one night to take Angie to see her mom.

During the visit, Cameron overhears a domestic squabble next door and decides to check it out. Inside, he finds a man fighting with the neighbor. The man runs away before he can be stopped, but the lady is extremely upset with Cameron. While trying to get answers from her, Angie sneaks into the room, as if called by a voice. She enters the bedroom and is locked inside by a mysterious force. When Cameron is able to enter, he finds her staring in the corner. The lady’s baby was evidently in the room before, but has vanished and when Angie turns around, it is evident that she is not the cute kid we knew just moments before.

Investigating the strange happenings further, Cameron discovers he must sacrifice six blood relatives to the demon Lilith in six days, in order to save Angie. With very little hesitation, Cameron begins his quest to choose the family members who are not worthy of continued existence.

After watching this film, it became apparent that two things happened. First, it is very clear that the writers of this film are fans of the TV series Supernatural. I half expected Sam and Dean Winchester to show up to put an end to Lilith, once and for all. Even the font used for the logo is very Supernatural-esque. Second, the choice of lead man (YouTube celebrity Kian Lawley) was meant only to try to draw in a certain clique. Sadly, both of these choices made this film suffer.

The film runs at a very quick pace, with little chance to get to know the characters. But honestly, they were devoid of anything likable, anyway. Cameron begins the film as a guy who has a big heart, but even with his first kill, he already has turned into a cold-blooded killer. He even comes up with reasons why some should live, while others must die. His one code of, “I won’t kill kids” is quickly forgotten as time starts getting shorter and shorter. It would have been understandable had the filmmakers spent more time showing and building a relationship between Cameron and his niece, but that did not happen, so you are left with a wash of questions, like, “Why would he do that?”

When choosing the film you want to catch one evening, I would say do what this film preaches: Choose someone else.