Chris Rock Spirals Into The Book of Saw 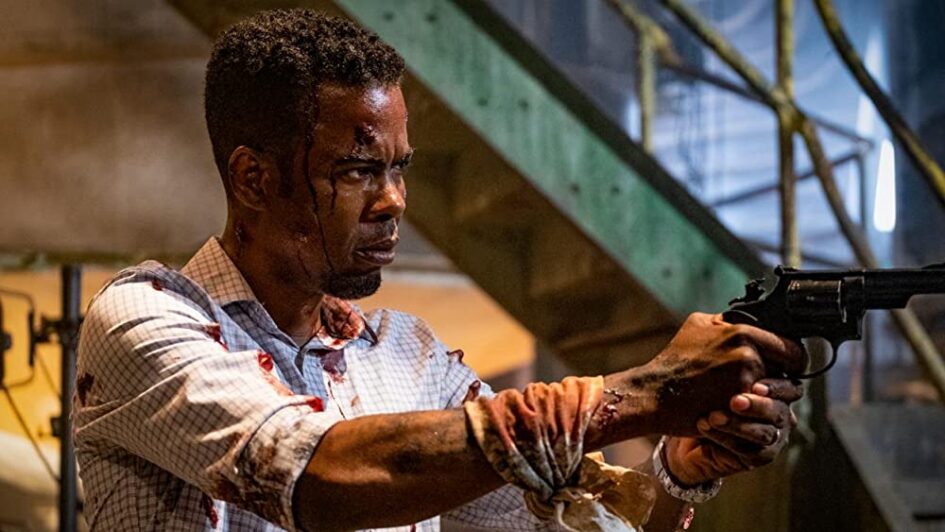 Twelve years ago, Det. Ezekiel “Zeke” Banks (Rock) ratted out a crooked cop, pretty much isolating himself within the department. Now others don’t trust him, but he’s gotta be a team player. It didn’t help matters much that his father (played by Samuel L. Jackson) was the police chief at the time. Cut to the present day. Jigsaw is dead and a copycat killer has a serious bone to pick with the police department. Will anyone survive the demented games they’re forced to play?

As this is the ninth installment of the franchise, it’s somewhat a surprise that Tobin Bell doesn’t appear as the trap mastermind (which is a first). What is set up to be a murder mystery plays out like a police procedural. There’s crooked cops. There’s a killer mutilating people, leaving body parts as clues. And only one person can piece them all together before time runs out…

If this scenario sounds familiar, it’s because I’ve seen it played out way too many times on TV. Maybe I’m jaded, having watched so many similar programs in the past (the original CSI was a favorite show of mine), but the storyline just didn’t feel original or live up to my expectations. Regardless, my main attraction to this movie was seeing what Rock could bring to the horror genre, not its connection to past Saw films (more on that in a minute).

There’s something about crime stories that seem to interest Chris Rock at this stage in his career, and I’m all about it. After appearing as the head of a crime syndicate in Season 4 of Fargo, now he’s playing the good guy. Zeke’s character is definitely full of storyline tropes, as he’s a jaded, divorced cop who too often has to tackle crime head on, by himself, since he can’t trust anyone else. And it seems like every move he makes is either the wrong one or a few steps too slow. This is all compounded when he’s assigned a rookie partner (Max Minghella).

An excellent casting choice was bringing in Samuel L. Jackson as Zeke’s father. This actor seems like he can do no wrong with his character selection. Unfortunately, this ringing endorsement becomes a wasted opportunity, as the pair actually have very few scenes together. That definitely felt like a bait and switch that I didn’t like.

In terms of connecting to past stories, the killer is simply a sick freak who just wants to play games with these officers’ lives. The Big Bad wants to get under the skin of our hero. Does that sound familiar? Because that’s about the only connection to the other eight movies, other than wearing pig mask, which felt more like something from The Purge Universe than anything Saw. If you liked the past films, that would definitely be a letdown.

As this was a Redbox rental, the Blu-ray has a cool “Decoding the Marketing Spiral” featurette, which highlights some interesting behind-the-scenes stories that I enjoyed more than the movie, as a whole. Online rumors support Lionsgate wanting to adapt this film into a television series. I’m not sure how that could work without some serious work in the writer’s room, but I fully support seeing Chris Rock featured in more horror-themed tales.

With Halloween right around the corner, Spiral would be a great low-budget rental to get you into the spooky season, but I wouldn’t pay very much for the experience.