Eternal Power Corrupts What We Do in the Shadows 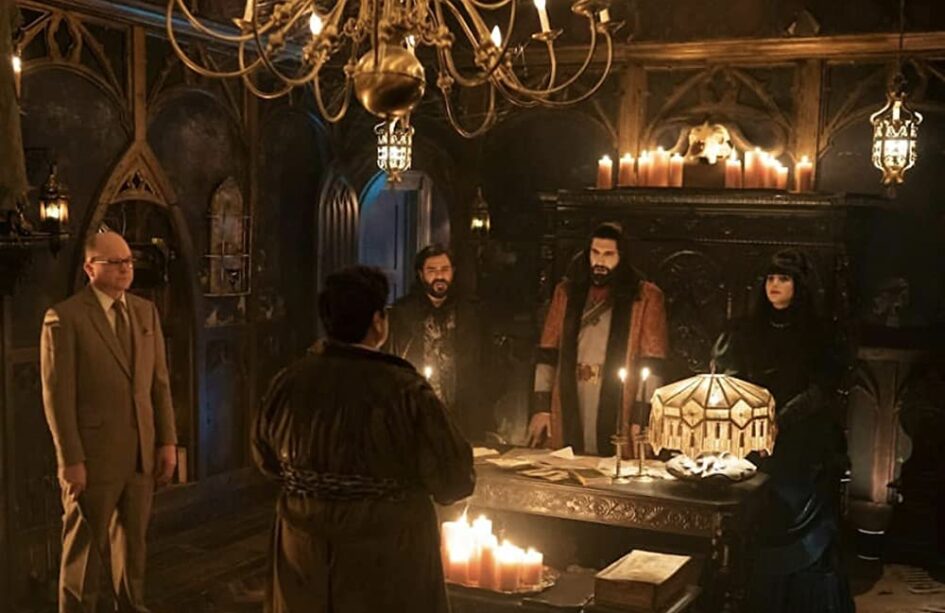 Per Matt
Living in New York feels like eternal damnation to the extreme, but when you’re bloodsuckers who happen to fail upwards — who never age, while you’re at it — it doesn’t seem so bad…

Season 3 of What We Do in the Shadows returned with a two-episode season premiere that did not disappoint.

After receiving a temporary stay of execution, this unholy trio (plus Colin Robinson, the energy vampire) survived an assassination attempt at the Nouveau Théâtre des Vampires, with the assistance of their human familiar, Guillermo. These Staten Island vampires are in a whole lot of trouble after nearly 70 percent of the most powerful vamps within the Tri-State area have been destroyed, so naturally the Supreme Worldwide Vampiric Council promotes them (Mostly, it’s because nobody else can assume the responsibilities.).

With their new-found duties, who will assume the Master’s Throne? The underlying question is who will protect these monstrosities from themselves with all of their power (within the undead world)? And will there be more assassins sent throughout the season for ultimately breaking the Vampire Code? If so, this dark comedy with a side of the supernatural will continue to create many more outrageous jokes.

It’s pretty obvious that I’m a devoted fanboy. The original New Zealand mockumentary had so many low-key jokes, I immediately latched onto the styles of Jemaine Clement and Taika Waititi. This adapted television series only builds onto the already-growing mythology with each season. Although small in total number of episodes, each season packs in many jokes that are built from previous episodes. The show is brilliant, really.

Nandor the Relentless (played by Kayvan Novak), Laszlo Cravensworth (Matt Berry), Nadja of Antipaxos (Natasia Demetriou) and Colin Robinson (Mark Proksch) are usually bested by the quick thinking of their familiar, Guillermo de la Cruz (Harvey Guillen), who’s the heart and soul of the show (His relationship to Van Helsing creates an obvious conflict of interest!). The four have been promoted as leaders of the Vampiric Council of the Eastern Seaboard of the New World and nothing good can come from this.

Hopefully, future plots will include more hypnosis, the Purple-Screaming Henries on display, Colin’s centennial celebration, unlikely shenanigans from The Sire, more from the Chamber of Curiosities, fewer romantic problems of Nandor and endless possibilities involving the ancient library full of historic pornography (Knobnomicon, Gutenberg’s Vatinarium and de Tocqueville Lusty Discharge Pamphlet are but a few examples found there).

With so many great callbacks to past episodes (I will never forget the brain scramblies!), I’m amped to see how the current storyline develops. And as great as the featured actors are, the small-screen Shadows brings in so many guest stars each season, I can’t wait to see who will appear next. Creator Clement appeared in last year’s season finale and Executive Producer Waititi takes his turn to appear here, along with Kristen Schaal as Floating Woman/The Guide! Previous seasons’ best guests included Mark Hamill and Pee Wee Herman (as Paul Reubens), who propelled the series to the 2020 Emmys!

Before the premiere aired, the series has already received the greenlight for a fourth season! All of this goodwill is topped by a Deadline report, which stated that uber producer/mega bully Scott Rudin has been removed from the show. That’s a whole lotta good news to celebrate for Shadows‘ new season. Make sure you don’t miss an episode.