Cinema Chains Are Embracing The Dark Side (By Ditching Masking) 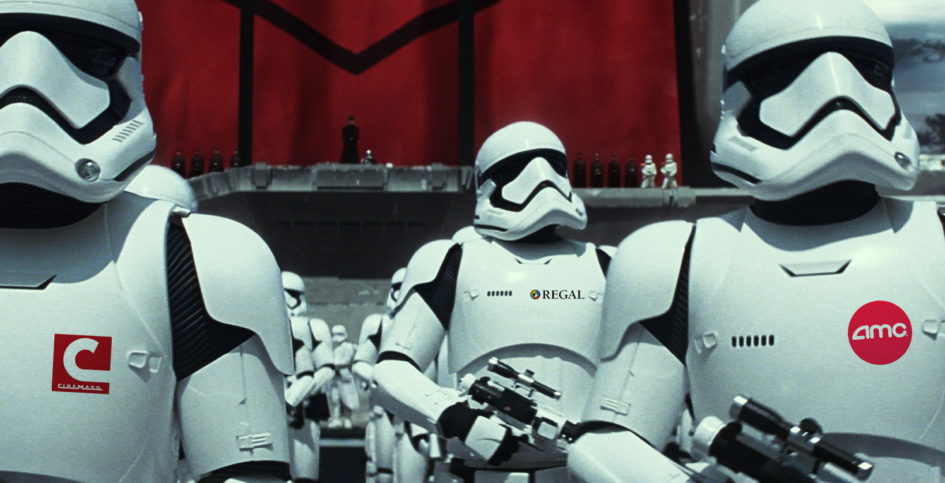 As we come out of “Star Wars Week,” a week where the windfall profits of chain theaters got a massive spike from the year’s peak Star Wars: The Last Jedi audiences, there is possibly no better time to take these presenters to task over a trend that is destroying the quality of movie-going experiences nationwide. I’m talking about the alarming lack of masking — or even the technology to implement it — in the largest, and most well-monied theater houses: AMC, Cinemark and Regal.

Allow me to share my first thought, when this disgusting practice became clear to me: “What the fuck is THIS?” 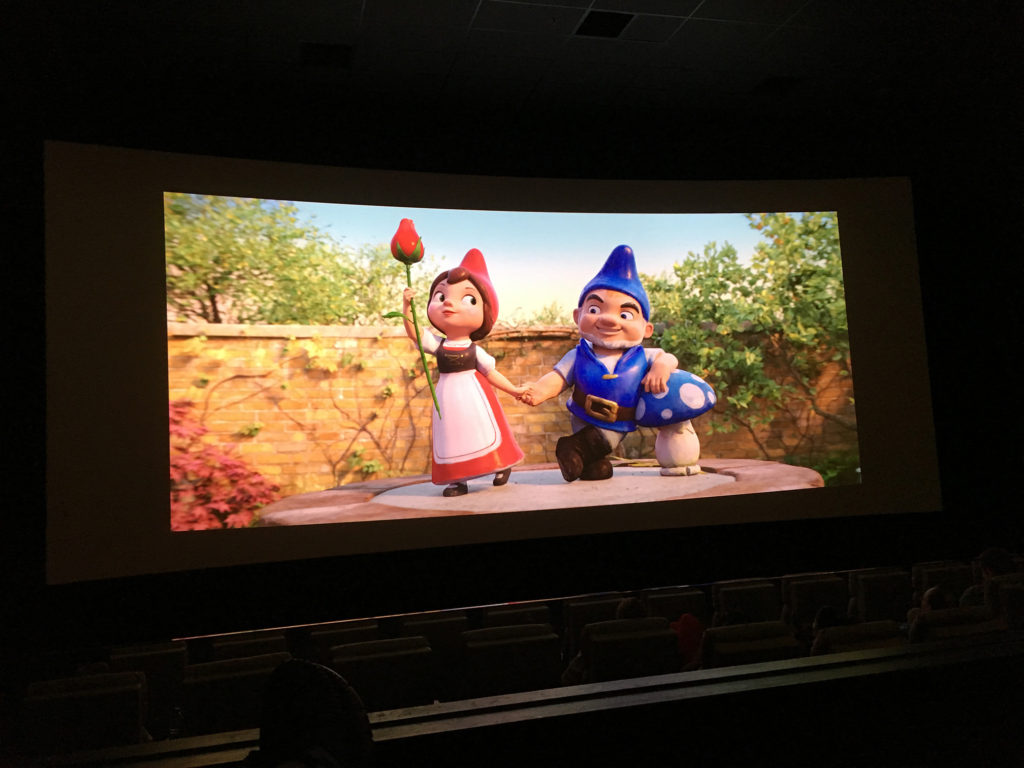 At one of my local theaters, a brand new 12-house multiplex in the Nashville area, the AMC Bellevue 12, this is what the trailers looked like before a screening a few weeks ago, of Wonder. Not just missing masking on the left and the right, but letterboxed on the top and bottom. I wanted to believe that this would clear up, and that it might be some side-effect of the pre-show or previews.

“What the fuck is THIS?”

As the screening progressed, it became clear that this was an error in the overall presentation. Of course, to commit an “error,” you’d have to know better or have meant to do something that is different from the actions involved in said error. Recently, it has become clear that the cinema operators are intentionally perpetrating this filth.

In Case You Don’t Know…

In case you’ve somehow managed to shelter yourself from an understanding of what masking is (and shame be to whoever failed in teaching this to you in the first place), here is a quick look at the concept, thanks to TWiT:

Simple. Logical. Essential to the art, right? Well, in the business of not-giving-a-shit about presentation quality, the corporate giants don’t seem to be the least bit concerned.

AMC has been doing their part to make negative headlines with ham-handed (at best, and flat-out malicious neglect at worst) mismanagement this past week. This sort of happening is entirely unsurprising, given their shameless lack of concern for a downward trend in quality. They’ve actually said, out loud, that they’re relying on the “clean lines and edges” of digital projection to make up for something that’s only partly related to such. They’re ignoring the reality of ambient light on a white surface, and so on, delivering the rough equivalent of throwing a projection on whatever white wall of your home you happen to find, and calling it “done.” Cinemark has created the same kind of negative buzz in forum postings and beyond.

What’s remarkable is that consistency isn’t even common inside one cinema from theater to theater. This results in a lack of uniformity, which makes for an appearance of each separate screen looking like it was just making up the rules on the fly. The aforementioned AMC close to me was showing Justice League just down the hall with entirely different results in their unabashed quest to spend the fewest dollars and/or moments of concern on this concept: 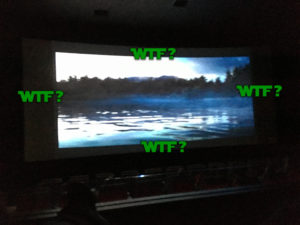 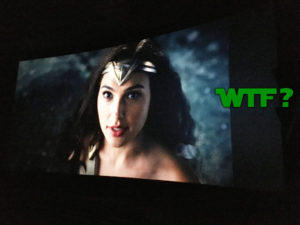 As you can see, above, the screening of Wonder results in an entire waste of the full screen size, and takes it down a healthy notch. Aside from the inherent quality issues, this also negates the entire strategy of choosing your seat assignment in advance, as ours could have easily been one or two rows closer, given this micro-projected effort. At least in the Justice League screening, they hit the top and bottom of the screen with the image, and left the distracting dead space to the sides only. This should have been possible in Wonder, by using the very digital technology they claim to be relying on to reduce their level of responsibility for screening quality to zoom the image to match top-bottom.

Why not do just that? Have the tech staff handle it. Why not have your projectionist or tech onsite make such tweaks?

You’d have to have a projectionist or a tech to be able to do so, and those positions are being dissolved in most theaters, nationwide. An industry which used to rely on a unionized workforce of theatrical-presentation professionals has fully executed the kind of disgusting corporate evolution that’s ruined so many business segments in America: going from union, to cheap full-time hourly labor, to cheap part-time hourly labor, to layering the role into other jobs like management and supervisors, to eliminating the technical staffers entirely.

“An industry which used to rely on a unionized workforce of theatrical-presentation professionals has fully executed the kind of disgusting corporate evolution that’s ruined so many business segments in America.”

In order to address true technical needs, you’d have to have not handed off nearly every aspect of presentation to automated systems in an attempt to cut corners on expenses — both in payroll and in equipment purchasing. You’d have to be involved in an industry that’s not eliminating problem-solving, trouble-shooting and corrective measures from the staff of the theater in a wrong-headed quest to “reduce piracy.” Hell, you’d have to still build theaters with a loft uniting all the houses, which isn’t even a “thing” anymore. When you look at how these modern “large screens” (As opposed to what, the 30-footer in your bonus room, Mr. Hughes?) are built, you even see how they’re without a single intent to accommodate masking: 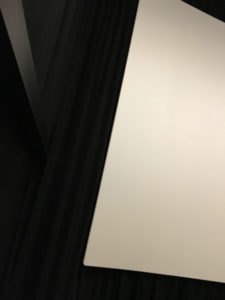 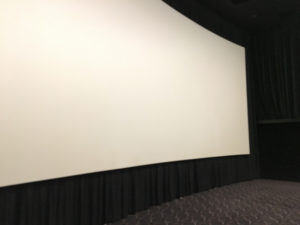 The lineage of poor choices in the massacre of masking shows a perfect storm of disgusting choices in the business of film screening. It is a process of staffing and capital expenditure reductions among a shrinking number of far too few competitors, run by aging fat-cats with only dollar signs on their mind, managing a workforce which has gradually become more and more dominated by feckless millennials, serving a mostly-feckless audience of non-confrontational consumer sheep.

Really, It May Mostly Be Your Fault.

Beyond all the internal missteps of cinemas, you’d need an audience that gave a shit. That’s right, you. You, the movie-going public, are mostly to blame. Your lack of demand that quality matters, that cinemas stop shaking you down for every penny while delivering a shoddy bare-minimum at-best, while conceptualizing “premium” theaters which are really just ways to make you pay more for the quality of seating and projection you should be getting anyway. Your passiveness and willingness to accept the lowest common denominator in audio-visual presentation: From ignorant retail masses falling for overbearing surround-channels-turned-up-full-blast demos to the embrace of gross “smoothing features” defaulted into the base settings of HD flat screens. From an array of suckers falling for range-limited and overpriced Bose products, mostly peddled by an amateur teenager at their local Best Buy, to the droves of rubes who don’t have the decency to stay for the credits at a film. You, dear audience, have helped dig this hole.

After all, any greedy corporation is going to aim for the lowest possible bar in delivering whatever is just barely passable to the market — just ask Microsoft!

“Most customers just don’t seem to care or even realize it.”

I was able to have a nice, informative chat with a manager at a local Regal cinema. I promised not to use his name, and I didn’t even make note of it, since his lackadaisical corporate masters in Knoxville would surely retaliate against his act of free will and artistic respect for film. This manager, who used to be in tech before the slow elimination of such valuable roles, agrees that it is unfortunate to see masking go the way of the dinosaur, but he solidly pointed back to the people: “Most customers just don’t seem to care or even realize it.”

This audience ignorance must be true, since my own three viewings of The Last Jedi last week rendered three entirely different results between two cinemas. On Monday, at the critic’s screening at Nashville’s Opry Mills Regal, then Thursday at the aformentioned AMC Bellevue 12, and then Friday, back to Opry Mills for their RPX screening in 3D. Results ran the gamut, with one full-frame/full screen, one side-letterboxed, and one top-bottom letterboxed. Total cinematic chaos.

Is It All Over?

This brings me to wonder if cinemas in general are an endangered species. At this point, with the reclining seats, the “fuck it, we’ll just project on whatever portion of that big white wall we feel like” masking, and the likelihood that a technical failure or inconsiderate audience member will ruin your outing, it is becoming more and more likely that people will just keep staying home in larger numbers — at least those who care, or have a superior screening setup in their own home, like myself, and so many other home-theater enthusiasts (or rich guys who can afford to pay someone to set up their stuff and dumb it down to a few buttons on a touchpad).

Has the evil empire won? Are the cheap (and variable-quality) thrills of 3-D and the application of incredible technology like Dolby Atmos now in the hands of the unqualified and unconcerned? Locally, there are members of a shrinking resistance, to be hailed for their efforts in keeping the correct and true form of cinema alive. Here, in Nashville, we enjoy the benefit of The Belcourt, and some regions are fortunate enough to be blessed with the presence of such heroic cinema entities as Alamo Drafthouse Cinema — where a dedication to the ethos of quality is present in all respects, to a gloriously satisfying and amusing degree. Coast to coast, many such stand-alone and small chain entities are still standing up to this insidious dumbing down of the film-viewing experience, refusing to murder the art of film in cold blood to raucous malaise.