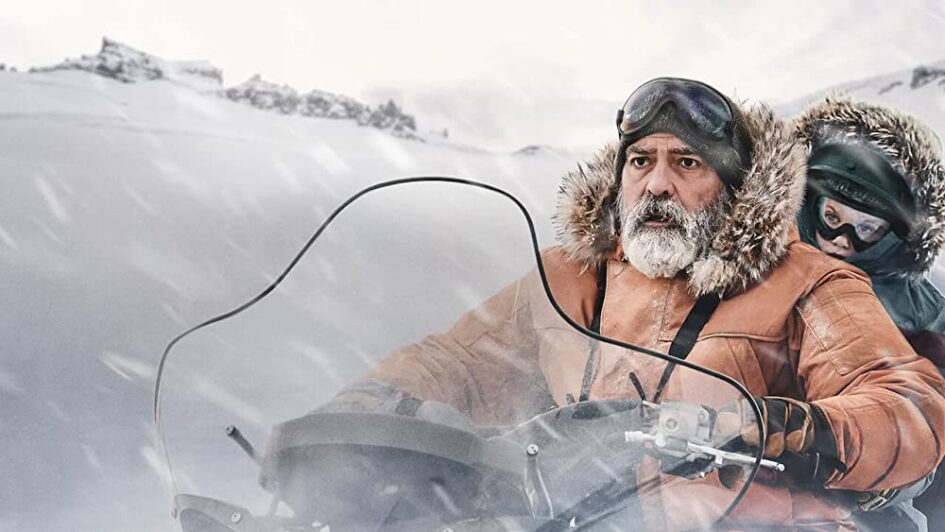 Per Matt
In the near future, an unspecified global disaster will destroy planet Earth, forcing its few survivors underground. Civilization’s last outpost happens to be in the most remote location, where a terminal patient tries to prevent the end of the world. It’s a grim scenario and humanity’s major threat seems inevitable, unless contact can quickly be made with a handful of astronauts.

Twisted into a grizzled, old man on his last legs, George Clooney’s Dr. Augustine Lofthouse, stationed at the Barbeau Observatory in the Arctic Circle, must race down the doomsday clock and hopefully resolve past mistakes, hoping to warn the crew of the spaceship Aether, before it’s too late.

Adapted from Lily Brooks-Dalton’s Good Morning, Midnight, filmmaker Clooney has added a sci-fi, cataclysmic twist to The Midnight Sky. Mostly intact are the depressing and loneliness storylines from the book. Unfortunately, there’s a lot of reading between the lines of what’s presented on screen and spoken by these characters, in order for the viewer to determine what has actually happened in the storyline. The silence is deafening at times and the beginning of the movie is very slow to develop, but I didn’t mind the plodding pace and slowly unspooling storyline, because I was already hooked onto the narrative. There’s no politics involved (THANKFULLY!), but a somber message is sent, loud and clear.

When nowhere is actually safe for these characters, where can they go to live their lives? It’s a sad story, hopefully not one which will eventually play out in real life. Outer space can be a lonely, deadly place. It’s a vast location that’s constantly trying to kill you, while keeping you away from those you love. With immediate NASA missions planned to set up an outpost on The Moon and future plans involving a settlement on Mars, humanity’s future home on a previously undiscovered exoplanet like Jupiter’s K-23 seems like a believable possibility. A lot can happen during a cross-galaxy voyage, and we, as a species, should start considering those options, before living on Mother Earth is no longer feasible.

A minor quibble involves Ethan Peck’s portrayal of a younger Augustine — who looks nothing like Clooney — so I had to do a couple of doubletakes before finally realizing who the character was. The flashbacks of a lost love are never fully fleshed out, although Felicity Jones’ Sully is the only true character receiving a backstory here, as brief as it is. Sadly, there’s just as much of the story happening offscreen (if not more!), than what is actually happening in front of the camera. I wanted so many answers that never quite materialized.

As a lifelong science-fiction fan who always likes snow-filled stories, I enjoyed this Netflix film. Clooney, the filmmaker, seems to be growing as a director, but the screenplay by Mark L. Smith (known for his Vacancy, Overlord and The Revenant scripts) could have used a couple of rewrites. He really didn’t do Clooney any favors by withholding some of the story’s most important explanations, but rays of hope do shine through for the film.

This isn’t the first time a cataclysmic, dystopian storyline has been brought to the screen (and probably not the best, either), but it did keep me interested throughout its entire duration. If you’re a fan of the subgenre, you should give it a chance.