How much does it take? What is the breaking point? How far can someone be torn down before they stop being a person? Before they stop having any humanity and finally succumb to a dark, deadly state of mind, where they can do anything without a shred of remorse? I think the answer to that question really depends upon the person.

We are all wired differently. We deal with stress and emotions differently. For example, I can deal with a lot of work-related stress (schedules, deadlines, meetings, incident reports, etc.), but anything that has to do with the well being of my little child gets me all discombobulated. Any time I think about the horrors of this world meeting her, my “fight or flight” system kicks in, and sometimes I make poor choices because of it, without thinking everything through. I can just imagine how my world would be ravaged if any of those things happened to her.

Parents have a distinct bond with their kids that is stronger than any other bond known to man (except maybe one’s devotion to their religion). Not even the love for one another is strong, in most cases, compared to the love of a child. Children depend on us in a way that no one else does. They need us to feed them, provide the basics and guide them through the obstacle course known as life. It is not a parasite-type connection, but more of a symbiotic one. The feelings they give us are unmeasurable. They show us flaws in our logic. They even teach us some things, like how to look at something from a completely different perspective. And as life goes on, the symbiotic relationship actually flips, as when our lives begin to wind down, our children are usually the ones there to take care of us, giving back the same love and support we gave them during their formative years. When this bond is threatened, we will do anything and everything to save it. But when it is broken, so is a part of our soul.

Hunter Hunter is a new horror thriller from IFC Midnight. It was released on December 18th, 2020, and features the ’90s/early 2000s film star Devon Sawa, who portrays Joesph Mersault, a husband/father living in the wilds of Canada. His wife, Anne (Camille Sullivan), and daughter, Renee (Summer H. Howell), live off the land, free from the hustle and bustle of the less-than-tranquil city life. However, the wilderness has its own terrors, and Joseph finds that another predator, a wolf, that has moved into the area, killing their animals.

While tracking the dangerous wolf, Joseph finds a campsite. Investigating further, it is revealed that the camp was of some young women, all of whom appear to have been brutally murdered, stripped and arranged in a circle, giving the feeling of a cult killing. Afraid to instill panic into his family, Joseph does not tell Anne or Renee about what he discovered, but instead leaves the next day to track down the killer. 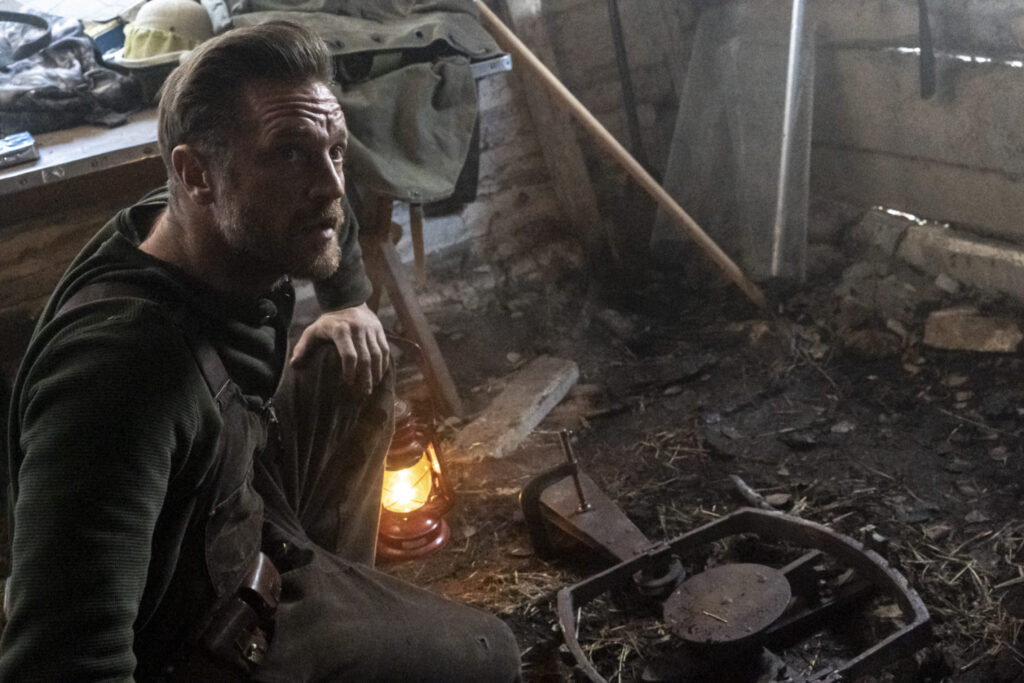 The next day, Joseph does not return. Anne, afraid that he may be hurt in the woods, contacts the local authorities. Due to the fact that the Mersaults live on federal lands, the police reluctantly refuse to assist, as doing so may cause them to lose their property, should the feds become involved. That night, Anne finds a wounded wildlife photographer named Lou (Nick Stahl), who claims to have been attacked by a wolf in the area. Believing his story, Anne and Renee bring Lou into their home, helping nurse him back to health.

Cut off from civilization, with no help coming, are Joseph, Anne, Renee and Lou prepared for the evil about to enter their lives?

Writer/Director Shawn Linden pulled off his gloves for this horror thriller. Hunter Hunter is a film that appears on its surface to have several different possible outcomes. You have an apex predator in the wild to deal with. Then you have a possible Satanic cult butchering women. Add to this the self-imposed isolation and you have the recipe for a deeply thrilling ride. And when you make it to the end, a truly grisly and macabre scene unfolds, showing exactly what can happen when someone is pushed over the breaking point. Linden not only pushed that envelope, he ripped and gutted it, like he does his audience.

Hunter Hunter is designed so well, it actually is one of, if not the best, films of 2020. It draws you in and leaves you wondering what is around the next corner of the story. I am not “giving” Hunter Hunter a perfect score. Hunter Hunter earned all five out of the five stars I am giving it. The slow burn pays off in the end. While this movie does not lend itself to a sequel, I hope other films follow this excellent example of character development, story telling and pure horror. Simply put, Hunter Hunter is a must-see film.