Nicolas Cage has a career that has spanned as long as I can remember. Some of my favorites were Face/Off, Con Air and The Rock, mainly ’cause when I want an action flick, I do occasionally want a believable, non-roided-up hero or villain. Cage hits that mark on so many levels in those films. When he was Castor Troy in Face/Off, he legit felt like a psychopath, while in Con Air he gained my sympathy as a man who was just trying to protect his pregnant wife from aggressive douchebags. His ability to be both loved and hated endeared him to me. I don’t think the genius behind his work gets enough praise.

Somewhere in the past few years, Cage has made a change into more edgy content. When I saw the trailer for the 2017 horror flick Mom and Dad, I was kinda taken aback by Nicolas’ portrayal of a parent gone crazy. It seemed to light a new fire under his career. I know he definitely let the “freak flag fly” playing Johnny Blaze in the Ghost Rider film series, but after Spirit of Vengeance in 2011, I actually had to go look him up on IMDb to find something he had done. And none of them until Mom and Dad rang any bells for me.

Color Out of Space is what I consider the next great film from Nicolas Cage. This horror/science fiction/fantasy film was released in 2019 from director Richard Stanley, focusing on the Gardner family. Nathan (Nicolas Cage) has recently moved his family to a farm, out in the sticks. His wife, Theresa (Joely Richardson), daughter, Lavinia (Madeleine Arthur), and sons Benny (Brendan Meyer) and Jack (Julian Hilliard) don’t take extremely well to the rural life of raising alpacas and growing tomatoes. Lavinia ends up exploring Wicca, trying to restore the health of her mother, who recently had a mastectomy.

One night, a meteor crashes onto their property. The meteor causes a magenta spray of lights and is later hit by lightning several times, releasing something from inside. Soon after, the family starts exhibiting very odd behaviors. Theresa cuts off two of her fingers. Jack becomes traumatized by something he has started seeing, that no one else sees. And Nathan begins having major fits of anger. The alpacas also start exhibiting monstrous changes, becoming twisted, demonic versions of their former selves.

As more and more things happen, the family soon takes on the same mutations. The world around them also starts taking on the same magenta colors seen from the meteor, leading Nathan to believe that whatever escaped from the asteroid is reshaping the world around it to match its home world. With his world crumbling, Nathan has to focus on saving his family and possibly getting away from this alien entity. 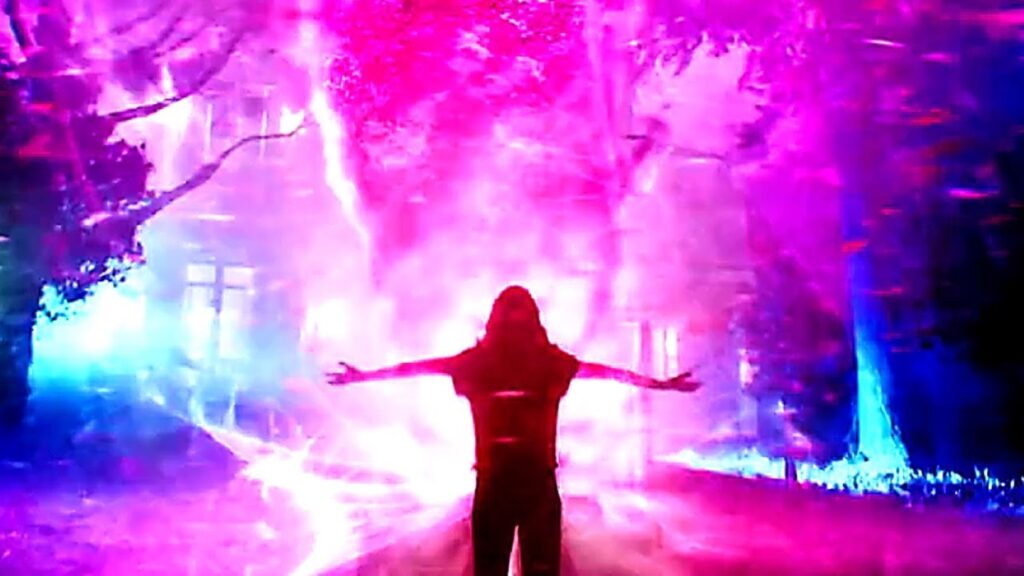 From that synopsis of the film, I hope you can imagine the truly bizarre and bat-crap insane moments that are in this gem of a film. Based on H.P. Lovecraft lore, this film is truly the crazy movie that we need today, when dealing with the real-life craziness brought on by the Coronavirus outbreak. With many of us sheltered in place, Color Out of Space allows you to unplug your brain for its entire run time. I found myself giggling at some of the Crazy Cage moments, being stunned and horrified by the mutations that happen and genuinely hoping the family finds a way to stop this creature from destroying them.

Maybe this pandemic has softened up my expectations in film. Maybe it has changed how others feel about these kind of over-the top-flicks. But Color Out of Space is exactly what this world needs right now to have a moment of pure-movie fun. I give Color Out of Space a solid five out of five stars. Do yourself a favor and watch it (along with Mandy, like I mentioned earlier). And after watching, you too may realize that Nicolas Cage is the great actor we need today.