The Comic Book Men Get Troma-tized! 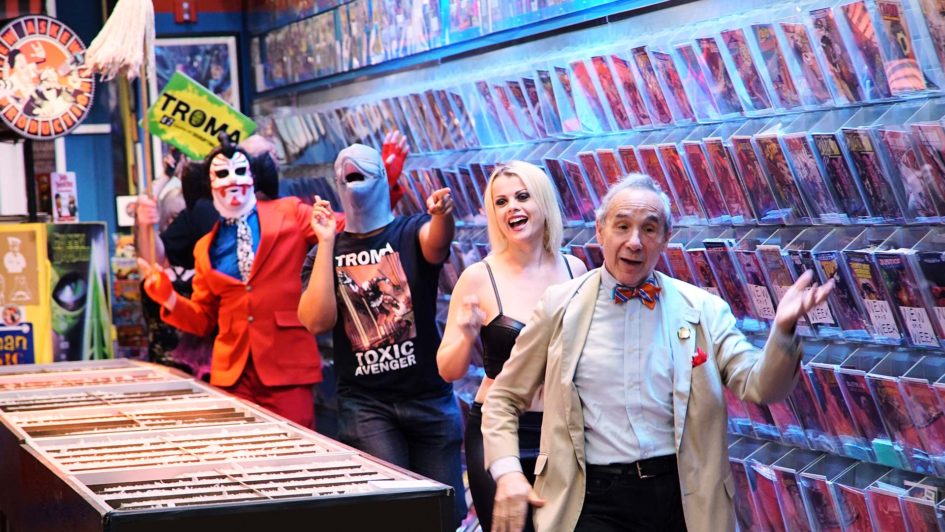 Lloyd Kaufman and Team Troma put the Comic Book Men through a grueling audition for an upcoming film!

Kevin Smith has seemingly always been at the forefront of pop culture and has lived and worked within the confines of Geek Culture for a long time, so it only seems natural for his TV show to do a crossover episode with Troma Entertainment. Famously known as the home of independent films with microbudgets, Troma has released some classic films, including The Toxic Avenger, Class of Nuke ‘Em High, Sgt. Kabukiman NYPD, Dolphinman Battles the Sex Lobsters and Victor Goodview.

Airing on the AMC network, this reality TV program was actually an ingenious audition and cross-platform promotion for Uncle Lloyd’s upcoming production, Shakespeare’s Sh*tstorm. Tromaville houses a lot of underdog films within its library, so casting a Comic Book Man as a background actor actually feels like the right choice to make.

Sandwiched between the daily interactions of the store’s staff and prospective customers, the audition process included a scream test, a star-crossed-lovers acting scene and a Troma nuclear meltdown that defies description. Walt Flanagan and Bryan Johnson were eliminated after the second round, so it all came down to a horrific chase by Toxie and a gruesome feat to decide whether it was Mike Zapcic or Ming Chen’s lucky day. By the end of the episode, it was Ming who definitely became Troma-rific.

While it’s way too early to know what to expect from Shakespeare’s Sh*tstorm, it’s safe to say it’ll be a genre mash-up that only Troma Entertainment could envision. Coming from the company that created Tromeo and Juliet, that’s saying a lot!

It’s pretty much a given that we’re big fans of Team Troma, here at Zombies In My Blog. We’ve been reviewing their movies for a while now, even chatting with Uncle Lloyd at Dragon Con a couple of times. Throughout the years, we’ve briefly visited with the Comic Book Men on the convention circuit, but since their show has bounced around, airing at different times, it’s been difficult to stay up to date, watching all seven seasons’ worth of Comic Book Men episodes. But after watching this episode, it’s definitely time to play catch up, filling up the DVR for some weekend binge watching.

This was a great themed episode and it was fun watching the Comic Book Men getting Troma-tized! Looking forward to seeing more interesting topics in future episodes.