Per Matt
When a show hypes up its entire season, leading to an epic conclusion… but that grand finale fizzles due to not one, but two controversial decisions that felt absolutely arbitrary and incredibly inconsistent from the rest of the season, let alone many of its previous years of production, you must be watching BattleBots in 2022!

Don’t get me wrong, I absolutely love watching the robot combat sport. I’ve been a fan since its Dark Ages (airing on Comedy Central). I’ve witnessed some great lightweight bot battles in person at Dragon Con and other conventions. I was thankful when ABC revived the series and thrilled when Discovery Channel and Science kept the ball rolling. Bounty Hunters may be the best format yet for the show, but as far as I can tell, it was only a one-year wonder. Rest in Peace, Bounty Hunters.

All of this buildup is meant to prove I’m a big fan of the show. But after watching Season 11 (in actuality, the 22nd year of the robot fighting competition), it might be time to reevaluate some of my life decisions.

I was prepared for big things after watching the season premiere (New Rules; New Location for 2022). COVID-19 had previously slowed the show and no longer were just the competitors in the audience — the verbal interaction of the crowd has been long overdue. Pete “The Bot Whisperer” Abrahamson’s presence had grown a tad (still not enough for my tastes), while Jenny Taft was temporarily silenced (both as we had previously wished a couple of years ago) — she’s presumably on maternity leave.

There were some rule changes, but they weren’t immediately evident. The upper deck of the BattleBox was evident, put to good use for knockouts while the addition of spit-guard windows tried to prevent bots from being totally tossed out of the battle arena, even though there is still a small area that still allows it.

The show seemed to stall half-way through the season, building resumes for the postseason bracket. The best element of Fight Night was removed (What Happened to The Desperado Tournament?) and there was even a playoff match that was skipped in order to fit the show into its two-hour timeslot (highlights were shown of the Cobalt-Whiplash match). I’m absolutely not a fan of that. I want to see every match, especially during the playoffs.

Anything can happen during the tournament and quite a few overrated competitors showed their true colors. The love-hate relationship of Jake Ewert’s domination continued as Team Hydra crept in as the No. 31 fighter, making it all the way to the Final Four from the play-in round. That was a true highlight, so was seeing Tombstone bounced in an early round. I had pretty much enjoyed watching the entire season until the grand finale, which threw everything out the window as it went up in flames.

A controversial ending to Hydra-Tantrum led to a split decision, which the crowd and I both disagreed with (you can judge for yourself in the following judge’s score sheet). If a team is controlling the entire match by flipping its competition 17 times within one match, it SHOULD win out in both of the control and aggression categories, but common sense is not common here. 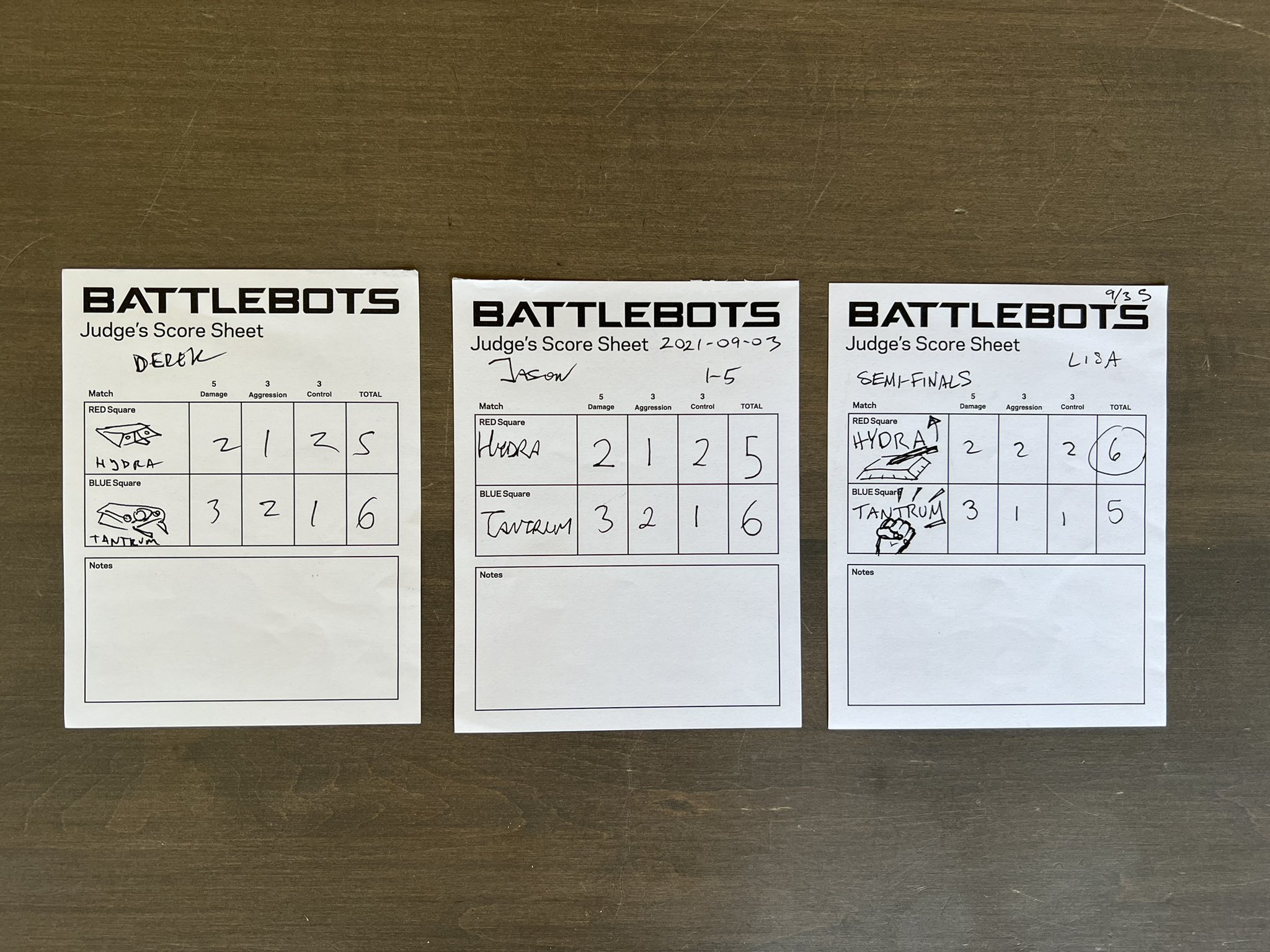 Following that decision — Where’s Captain Obvious when you need him? — was yet another controversial ending, this time for the Minotaur-Witch Doctor match, which included an unsticking of a competitor, resulting in that team winning. There had been no previous “unsticking” in any match all year long. Some would say it hadn’t happened ever, but I can’t remember that far back.

It’s no surprise both “winners” of those matches faced off in the grand finale. And it should be NO SURPRISE both teams were led by a female and the commentator proudly boasted this as soon as it happened. Conspiracy theorists believe the fix was in full effect the entire time in order to show inclusiveness toward the woke crowd. I’m not so sure about that, but something sure stinks here.

Now, I’m not going to strike from watching this show, because it’s USUALLY awesome, but I disagreed with both decisions and refuse to believe Tantrum is the TRUE champion this year. I petition for next year’s rules to give more points for aggression and prevent the unsticking of bots EVER.

Are more judges (or at least, new judges) necessary? Derek Young, Lisa Winter and Jason Bardis are all former BattleBots participants, but their consistency should definitely be questioned.

Even the show’s social media team asked for fans’ thoughts about the unstick rule for next year, although that opened a can of worms, to be honest. It was a bad rule to start with (some believe it never even existed) and if random rules pop up during the final rounds, why even have them if they’re not enforced the rest of the year?

So, the BattleBots 2021 World Championship didn’t award The Giant Nut to the Deadliest Flipper on the Planet. The Hall of Champions should definitely include an asterisk with this year’s winner. I’m not even being sarcastic.

The youth movement was real as more than a few first-timers made serious progress in the tourney. And watching the show’s history was a great flashback, having outgrown each of its previous homes from San Francisco to Los Angeles.

I liked how the last two years, trophies were awarded to teams based on their robot’s design and operation, regardless of their performance in the tournament. The awarded categories were: Most Destructive Robot, Best Designer and Founder’s Award. No reason was given why these awards, along with The Giant Bolt, weren’t awarded. That is not good.

Is it time for BattleBots to make some big changes? I think so. Most likely, I’ll be back again next year to complain if they aren’t made…