You Won’t Be Alone When You’re a Witch 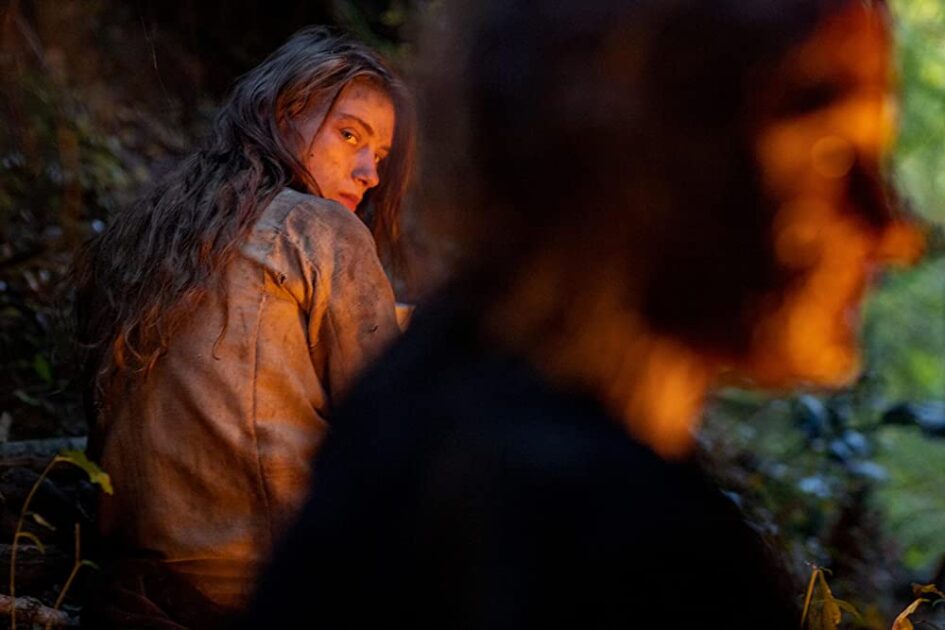 Per Matt
There is weird. There’s horror. Then there’s art-house horror. And finally, there’s You Won’t Be Alone. Distributed by Focus Features and currently enjoying a limited release in movie theaters, this movie definitely qualifies for each of previously listed categories.

In his feature film debut, Writer-Director Goran Stolevski uses a 19th century witch as an allegory to explore the human race. The movie begins with a relatively young mother doting over her newborn. When a wrinkled and withering Old Maid Maria (played perfectly by Anamaria Marinca) initially approaches her, demanding the child’s blood, the woman makes a deal with the devil that she shall soon regret.

Instead of losing her brand-new baby, the child is allowed to live 16 years before being offered to the scary lady. As you can imagine, the mother attempts to bypass the blood oath, instead stashing the child into a nearby cave, where Nevena (Sara Klimoska) becomes feral. Once Maria claims her prized possession, she uses her “witch’s spit” to turn the girl into a nightmare creature, much like herself.

With this transformation, Nevena’s taste for blood develops, as well as her ability to become a shapeshifter. But with very little communication and social skills, Maria bails on her muse, leaving the young one to survive on her own.

As an outsider, Nevena longs for human connection in rural Macedonia and through a series of events — some accidental — she lives her life through a variety of people in nearby villages, including an abused mother, a musclebound man and a young girl.

Through the body-switch tropes, Nevena learns what it means to be a human. The process is a very bloody one… one which is better seen than described in words. Speaking of words, Nevena’s character is pretty much mute throughout the entire story, but the character’s endless thoughts are narrated throughout.

Reading the broken translation of the ancient Macedonian language via subtitles is definitely a tiresome process. At times, I stopped reading in order to take a break and fully focus on the big-screen action. Then I’d return to the spoken story without missing much.

While there really aren’t any jump scares to speak of, the supernatural elements are incredible and there’s more than a few violent scenes. In fact, as an animal fan, I thought there were some gratuitous creature deaths that could have been deleted, but felt period appropriate, serving the script.

You Won’t Be Alone is folk horror that looks inward at ourselves. It’s scary, at times, what we have become as the human race evolves, but it makes a pretty good story. I would favorably compare this to another art-house horror film with a somewhat similar theme (but one I found more enjoyable): The Witch.

And there’s some good news to fans of Alone: Focus Features has picked up Of An Age, the second feature by writer-director Goran Stolevski. Set in the summer of 1999 as a 17-year-old Serbian born, Australian amateur ballroom dancer experiences an unexpected and intense 24-hour romance with a friend’s older brother.

That description sounds like the furthest thing, possible from You Won’t Be Alone. And that could be a very good thing for the filmmaker’s future, which already looks very bright…