Cosplayer of the Month: Jackie the AkaiCon Panda 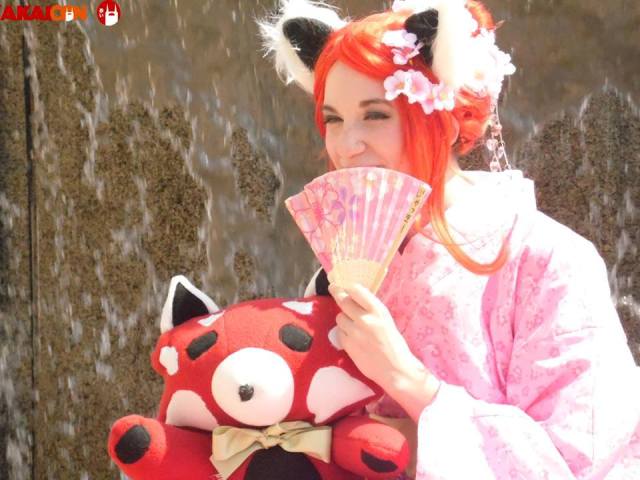 Per Matt
AkaiCon is Nashville’s premier anime convention, taking place August 1st through 3rd featuring the mascots Jack and Jackie. Not long ago I spoke with Jackie, who previewed the second-year convention and discussed her introduction to cosplay and anime. One word of advice: Whatever you do, don’t call her a fox, she’s a red panda!

How did you become the AkiaiCon panda mascot?
– “I actually started off as the head of registration and then I added on as the assistant to Chibi Time — our kid’s stuff — but I actually never made it there, because I was a Cosplay Contest judge, as well. I was all over the place. Two weeks before the con, we went to Anime Weekend Atlanta and suddenly we had a shortage of staff members to work the booth. So, I worked it most of the weekend with some of the other volunteers. One of the Con Chairs said, ‘You did a really good job. Do you want to be the mascot?’ Of course I do!

Now, we already had two mascots — the Chino twins — but we just added me to them. Unfortunately, they had to step down. They had a lot of schoolwork to deal with and we’re very sad to lose them. We wish them the best. Now it’s just Jack and Jackie: The AkaiCon Pandas. We kind of did a Ranma 1/2 thing with Jack. He’s actually my magical-panda boyfriend. We’re going to have contests for people to draw human Jack. I’m really excited about that.”

Tell me a little about the convention’s theme this year.
– “This year we’re doing a good-versus-evil theme. When you prereg, you get to decide if you want to be good or evil. So, different panels and different events are going to get points. We have two Con Chairs: One is good and one is evil. They also will both represent different themes for next year. So, whichever side wins, that theme will be for next year. At the end of the con, one of them is getting pied in the face.”

Can you preview AkaiCon 2014 for us?
– “We’re doing a giant ball. The theme we’re thinking of is Castlevania. So, think the big, huge dresses and the gorgeous suits. I’m a costumer, by trade, so I’m really excited about that part. I know we have a couple other events, but most of them are still under wraps. We’re still working on them. We have a lot of really good submissions for panels, more than just character-based panels. We’ve got a Lolita panel and my friend is hosting it. She asked Jack and I to be the models, so Jack is getting a matching costume to me. He’s not happy about having to wear pants.”

How long have you been cosplaying?
– “Eight or nine years. I started off as a theater major. I’ve been in theater since I was 3 years old and costuming just came naturally to me. Once I got into anime, I wanted to make the costumes. My first costume was Momiji Sohma from Fruits Basket. I was 15 and it was awful. I had a mouthful of metal, no wig and huge, thick glasses, but I was so happy. It was so much fun.”

“That’s what we really want to do with AkaiCon: Help people remember why they got into this in the first place. It’s about the community, what cosplaying and convention-going is supposed to be about.”

How many costumes have you created since then?
– “In the last year, I did 46 costumes. I had a couple that I did for other people, but mostly made them for me. And now I have to do all my mascot costumes, so I’m just adding to the list.” 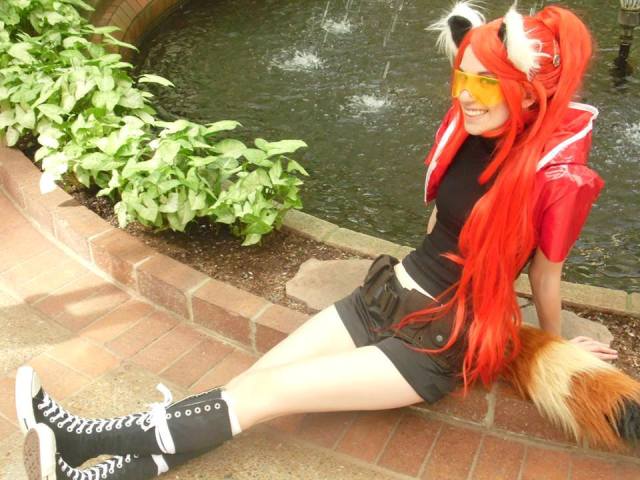 What are some of your favorite anime?
– “My favorite anime of all time is YuYu Hakusho. That’s, like, the second one I watched and I got really hooked on it. I’m really excited we’ve got Chuck Huber as one of our guests, since he and Kurama are my favorite characters in that series. Having the voice actor for Hiei, I kind of fangirled a little bit. I have to stay professional now.”

How did you get interested in anime?
– “I really loved reading historical fiction and fantasy books, when I was a kid. One of my sister’s friends introduced her to Rurouni Kenshin, because it was a historical fiction. We started watching that together and moved onto everything else. I discovered all the ones that were based on fairy tales… As a Disney Castmember, I have to be a part of this. All the Shojo ones I absolutely adore. One of my favorites is Princess Tutu. It sounds like the most girly anime ever, but I love it.”

What are you currently geeking out to?
– “There’s not a lot of new anime that I’ve been really hooked on. I really loved Puella Magi Madoka Magica. That one was really cool. I didn’t really get hooked into Attack on Titan, but I am excited for that fandom because we do have Matthew Mercer coming to our con. He just recently got the role of Levi in the dub. I’m excited for my friends who love that, but I’ve been mostly hooked into doing more Disney costumes. I’ve currently have Cinderella, Snow White and Aurora, all in the works.”

What kind of prizes can we expect for the AkaiCon Costume Contest?
– “Probably a lot of Funimation stuff. Last year, we had a lot of stuff from our friends at Crunchyroll. As the mascot, I get to be the MC of it this year, instead of being the judge. The kids last year were fantastic.”

Is AkaiCon purely an anime convention or will is it a multi-fandom event?
– “It’s mostly anime, since we are actually sponsored by Funimation. I’m very happy about that, but we are welcome to all fandoms. Last year, we had multiple panels that were not based on anime. Most of the staff are in multiple fandoms, so it’s not like it just has to be about anime.”