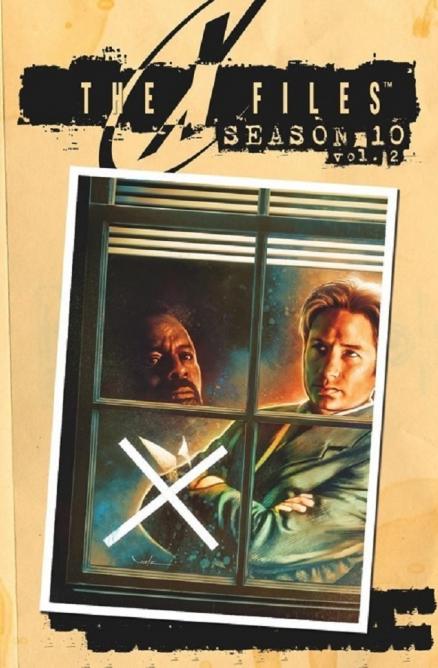 Just like the prop used in the storyline, I still want to believe in The X-Files… but this second collection of stories feels too unbalanced for the X-Phile in me.

In The X-Files Season 10: Vol. 2, Mulder and Scully have officially returned to the FBI and The X-Files department has been reopened… but not much has changed since they left. In fact, their old office has collected quite a few cobwebs and remained vacant, but more than a few mysterious cases have remained unsolved during the interim.

After the pair meets their young, new boss — Assistant Director Anna Morales — they realize she has large goals for the newly opened department. And like that, the Agents are whisked off to solve the latest mysterious, paranormal cases.

Comprised of five comic issues, Volume 2 mostly contains Monster-of-the-Week stories with only a splash of the series’ mythology for added effect. Building on former FOX TV show and feature films, this hardcover collection begins with resuscitating the fan-favorite character, the Flukeman. The two-part storyline of Hosts felt like a letdown, since the original Season 2 episode was so well written. At its conclusion, there seem to be many more Flukeman creatures popping up around Martha’s Vineyard, in effect, lessening the importance of the original storyline.

The next storyline, Being For the Benefit of Mr. X, seems to be part flashback story, part update of the long-to-be-considered-deceased character, Mr. X. It ends with a cliffhanger, offering little, if anything, of substance other than bringing back another great character just to kill him off, once again.

The best of the bunch was Chitter, which was also the only completely new storyline. This arc paired human sacrifices with killer cockroaches serving an entity known as “The Chittering God,” one that feeds on pain and despair. It was truly original and compelling and offered glimpses of a possible return in future issues (I hope!).

More Musings of a Cigarette Smoking Man wrapped up the book, which felt more like pandering to a fanbase than anything else. As a side note, the artwork was incredibly distracting, making the storyline uneasy to read. I was simply uninterested in reading it before I even began. Sadly, once I finished reading it, I was disappointed in its lack of depth.

Overall, these five stories feel unbalanced, more like they are stealing a little bit of glory from past successful episodes. These stories aren’t necessarily new, but sequels of sorts. Partly to blame is writer Joe Harris. For the initial five issues of the Season 10 storyline, The X-Files Creator/Writer/Director Chris Carter was credited as the co-writer, bringing the characters up to date from the events of the TV show and movies. Unfortunately, this time around, Harris is the sole writer and it shows. There isn’t much substance to Volume 2, which is a shame. The X-Files, as an entity, is much better than this and deserves better material.

I am hopeful, if not totally skeptical, for the future of Season 10. And just like Mulder, I want to believe. Hopefully, IDW won’t let me down in future installments.

Notable Quotes:
– “Extraordinary men are always most tempted by the most ordinary things.”
– “Worry about what’s living in here. There’s nothing we can do for the dead.”
– “They say great men aren’t born that way. It’s what they do in response to great disappointment and failure that makes them so.”