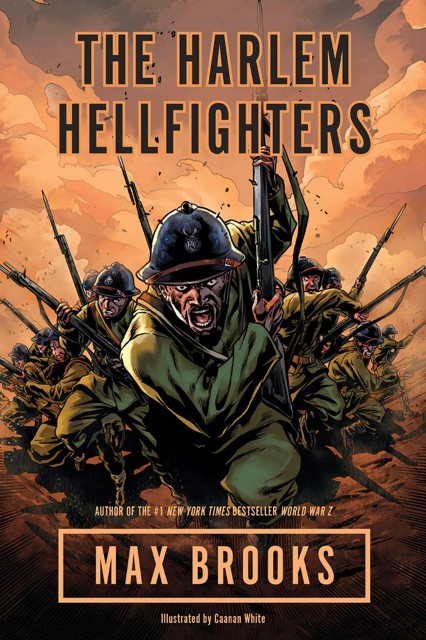 Per Matt
Taking a break from the Zombie genre, author Max Brooks focuses his attention on a little-known military unit that fought prejudices and battles both on and off the battlefield.

The Harlem Hellfighters is a historical graphic novel that depicts a brief and entertaining history lesson still unknown to many to today. In 1919, the 15th New York National Guard Regiment was created. It was a segregated unit that was known for being primarily the first African-American unit to serve in the American Expeditionary Force during World War I.

The unit was historic, because during this time in America, black soldiers were not permitted to fight for their country. If so inclined, they had to enlist with the French or Canadian armies in order to feel “nationalistic” pride. Organized in New York, many people enlisted hoping to return home as war heroes, ending racism once and for all.

When their deployment finally arrives, instead of going directly to the European battlefront, the unit bides its time by becoming the physical labor for the rest of American Expeditionary Forces with never-ending loops of training, chores and waiting.

Being unwanted to defend their own country, the unit is called upon by France and treated equally within their military ranks. Overall, the unit spent 191 days in combat, which was most of any black or white unit. The 15th Regiment never lost a trench or allowed a soldier to get captured and became one of the most decorated units ever, even though they were forbidden to fight in their own army.

Written as a graphic novel, the medium depicts a visual storyline that is only hampered in its lack of color. Sometimes the black-and-white palette’s lack of depth hampers the action, but it never slows the pace of the storyline. A variety of characters are depicted in the 15th Regiment, some of which are actual people while others are inspired by different soldiers. I enjoyed reading about Lieutenant James Reece Europe the most. He was a founding father of Jazz music, who went into battle with the 15th Regiment and later led the 15th Regimental Band.

On the battlefield, the unit quickly learns about the new advancements of modern warfare, including barbed wire, land mines, machine guns and gas warfare. The highlight of the book details Henry Johnson’s efforts in manning a listening post in no-man’s land, trying to intercept information from the opposition. Not only did Johnson almost singlehandedly hold off the German army’s sneak attack, but he saved his fellow soldier’s lives, as well. This helped the unit gain notoriety as The Harlem Hellfighters. As a result, Henry Johnson became the first American, black or white, to be
awarded the French Cross of War.

Once the 15th Regiment returned home, they were welcomed with a parade, but racism continued even after spilling blood and losing friends for their country. Brooks closes the book with historical notes and some awesome photographs of the actual soldiers.

In his Author’s Note, Max Brooks describes unsuccessfully shopping his Hellfighters TV script around Hollywood and practically giving up on the project until he partnered up with Avatar Press to create the graphic-novel adaptation to his book, The Zombie Survival Guide. This format provided the perfect tapestry to tell the tale of the Hellfighters. Now that his story has been published via Broadway Books, Sony Pictures and Overbrook Entertainment have partnered to adapt the story as a feature film, with Brooks writing the screenplay. Max Brooks’ passion project has now come full circle. I look forward to watching a great Hellfighters movie on the big screen sometime soon.

Strength: Inspirational storyline based on actual events.
Weakness: Sometimes, the art is difficult to interpret.
WTF Moment: The soldiers discover a new kind of death… the death of the mind, also known as shell shock, which the narrator’s Creole friends call “Zombies.”

Notable Quotes:
– “Revenge is like fire. It can light the darkest path.”
– “The truth’s got an ugly way of killin’ nice stories.”
– “Joinin’ something bigger than yourself can make you feel mighty small.”