Day By Day Armageddon: Beyond Exile 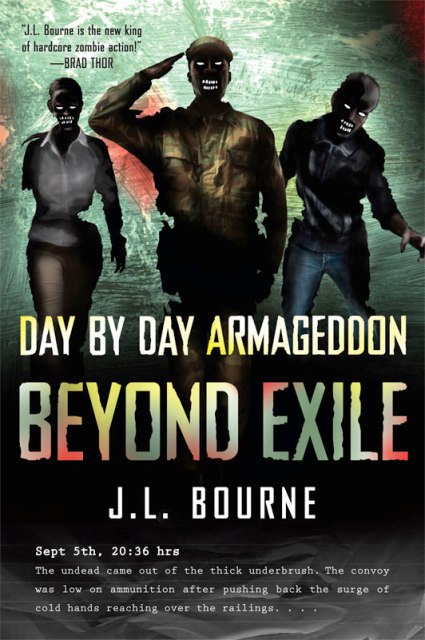 When his world comes crashing down around him, one man’s sanity lies with a pen and a pad.

Day By Day Armageddon: Beyond Exile follows the journey of our unnamed Naval pilot, who has gone AWOL just before the Zombie Apocalypse rears its undead head.

Beyond Exile is the second book of the Day By Day Armageddon series written by J. L. Bourne. The book is formatted as a journal to document life, since the character felt like life was passing him by. He uses it to withhold a little bit of his humanity, which is in short supply in this new world. Book One basically dealt with surviving the mysterious outbreak and staying alive, mostly dealing with solitude and stress. But the good soldier managed to rescue quite a few people, creating a makeshift family, hidden deep within their new home: An abandoned nuclear facility known as Hotel 23.

Book Two picks up as the ragtag group of nine has adapted to a new life: There is no communication with the outside world. There is no power grid. The Internet is down and out and almost all of the GPS satellites orbiting Earth have stopped functioning. If that scenario wasn’t tough enough, then there’s the daily battle to outlive an unknown, undead menace.

Seeking something useful and positive (other than staying alive), our hero carefully organizes supply runs under the cloak of darkness, but the book’s tone takes a turn after a group of Marines are stranded. A rescue mission is organized, but instead of gratitude, the soldiers hunt for their unknown saviors, hoping to commandeer their underground facility in the name of the U.S. Government, of course.

With no other options available, our unnamed soldier suits up, revealing himself to be a higher-ranking officer than all the other soldiers and reluctantly, he’s joined the ranks once again. During the SITREP, it’s revealed the civilian government no longer exists and there are also radiation-filled zombies lurking about.

Together, the military-civilian group fortifies the base, turning it into a functioning combined-operations center. Eventually, the group makes contact with the nation’s highest-ranking officers, who deliver weapons and supplies to the survivors. The combined group functions well together as our our intrepid hero undertakes a recon mission that’s doomed by contaminated fuel. Yet again, he must fight all odds in order survive yet again, until he realizes he’s not alone in the vast wasteland…

I absolutely enjoy the overall storyline of the Day By Day Armageddon franchise. It’s a personal tale of survival and it’s the little things that keep our hero sane, such as the joy of retrieving a functioning watch from the undead. Once in a while, Bourne throws in some concealed political jabs, but they’re tolerable.

Clearly, this unidentified hero is reflection of Bourne, who is an active military officer in the U.S. Navy. The emotion his character attaches to being lonely is fear, which the reader can easily latch onto. At times I got a little lost underneath the extensive military jargon that envelops the book, but that element molds this storyline into a realistic one. The high-tech gadgets used to battle this new nemesis makes Beyond Exile a believable, modern-combat scenario of the 21st century.

One minor complaint involves the Zombies of the storyline. While the author never goes into great detail describing them, they remain shrouded in mystery throughout the first two books. At its conclusion, Beyond Exile veers into uncharted territory with a bombshell revelation: the outbreak’s source is extraterrestrial in nature, one which is possibly 20,000 years old. Setting up the next chapter of the franchise, Shattered Hourglass, this military tale of survival seems to be transitioning into The X-Files territory.

Near the conclusion, a cool backstory is given, as detailed by a Wall Street Journal article. I am intrigued by the mysterious shadow government, Remote Six, and hope to learn more about it in Book Three. Saien was my favorite character, a former Middle Eastern freedom fighter, who is somewhat shrouded in mystery. I hope to explore his backstory, as well. I predict Tara, our hero’s love interest, is pregnant, but I hope that remains a very minor subplot. Bourne’s storytelling has improved from Book One and I can’t wait to discover more about this phantom menace in Shattered Hourglass.

Notable Quotes:
– “We are fast approaching the Iron Age.”
– “This bag was designed to go from sleep to fight in a hurry.”
– “She is no stranger to death, just a stranger to death walking.”
– “Upon death nothing grows… unless you count the undead hunger.”
– “The ship had the familiar smell of mothballs and a tinge of death.”
– “I am going to take the diplomatic approach with a five-hundred-pound LGB.”
– “As I moved from room to room, my mind drifted into darkness and daymares…”
– “Nothing was out there but the apocalyptic silence that still tortured my nerves.”
– “I had the advantage of a brain and firepower, but there were just too many of them.”
– “Any landing is a good landing if you can walk away from it, unless you walk away from it dead.”