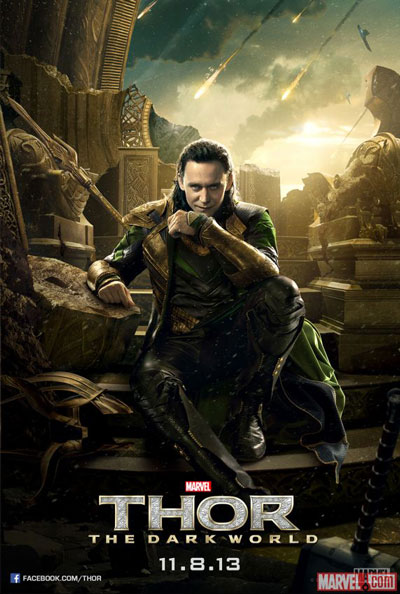 Like the speed of a thunderbolt, Thor’s second solo adventure never quite slows its pace.

Having recently caught the original Thor movie on cable, I was left wondering how Loki supposedly survived its climax. Does nothing ever get resolved within comic-book movies? Director Alan Taylor takes the reins for Thor: The Dark World and never looks back. While his first movie was a true origin story, Thor’s follow-up film is full of action, action, action. It also marks the beginning of Phase Two for the Marvel Cinematic Universe.

Apparently, Dark Elves come from darkness. Where else would they come from? After their home world was destroyed by Odin’s father, Bor, the few survivors remained alive within a sort of suspended animation until Natalie Portman’s Jane Foster inadvertently awakens the “dead” race of pure evil, thus absorbing the Aether (a surging energy within her), making her a valuable commodity.

Thor whisks Jane off to hide in Asgard and plots their next move. Before long, the Dark Elves arrive and leave a wake of mass destruction. Half-way through the movie, Loki gets worked into the storyline, as Thor releases his brother in exchange for vengeance.

In addition to all of this, the Convergence is fast approaching (the alignment of nine planets), causing random gravitational anomalies all across Earth, with Greenwich being the epicenter. This means England is about to suffer tons of extraterrestrial destruction. Thor’s the only obstacle from universal destruction… as if he didn’t have enough to worry about.

Natalie Portman returns as Thor’s love interest, but I still don’t like Jane Foster. I’m unsure if that’s Portman’s fault or mine, but I’m tired of the character. Kat Dennings is still the comic relief of Thor’s solo adventures and trust is a big theme. Speaking of trust, Loki spends the majority of the film smirking and being handcuffed, but he (literally) lets his hair down and reveals his true nature, by the end. One of the funniest moments was when Loki was cosplaying, creating a hilarious Easter Egg for comics fans. Somehow, Loki is either the problem or the answer to every problem in the Marvel Cinematic Universe (so far, at least). Although the character is very powerful and popular, I hope this trend has reached its end.

There seem to be many deaths within the Thor films — much more than any other movies of the Marvel Cinematic Universe. First Odin, then Frigga and Loki, but with characters always dying and coming back to life in comics, why should I expect anything else in their movies?

The Asgardians have the coolest costumes, but Kursed has something even better… he’s a beast that feels like a creature from Skyrim. Speaking of
the Asgardians, they don’t have a lot to do in Thor’s second outing. I’m hopeful they make a return appearance in Avengers: Age of Ultron, or possibly even Guardians of the Galaxy. And speaking of Guardians, make sure to watch both post-credits scenes. Taneleer Tivan (aka The Collector) is introduced in a post-credits scene, who will be a future villain in Marvel’s upcoming Guardians of the Galaxy movie.

Strength: Familiar characters (and the great actors, portraying them).
Weakness: Great action, but I like to understand what’s happening onscreen.
WTF Moment: This is definitely a Marvel movie, but all the teleporting makes it feels like an X-Men story.

Notable Quotes:
– “Trust my rage.”
– “I better get my pants.”
– “If it were easy, everyone would do it.”
– “I’d rather be a good man, than a great king.”
– “Where ever you go there is war, ruin and death.”
– “I’ve had a god in my brain… I don’t recommend it.”
– “You must be truly desperate to come to me for help.”
– “I fought to protect you from the dangers of my world.”
– “All I ever wanted was you and Odin, dead at my feet.”
– “There’s nothing more reassuring than realizing that the world is crazier than you are.”