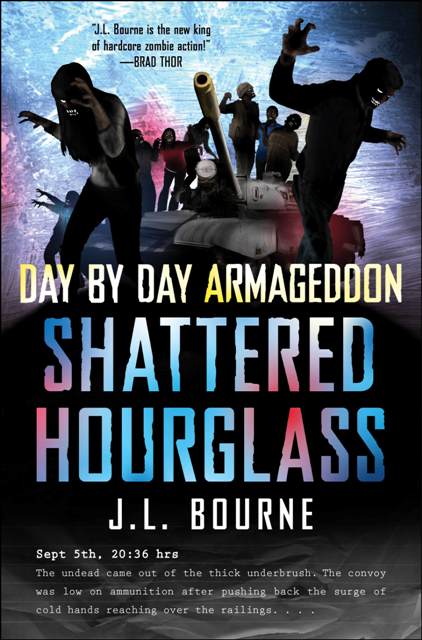 In this book of the Day by Day Armageddon series, J. L. Bourne attempts to wrap up the Zombie Apocalypse and somehow add extraterrestrial beings into the mix, as well. Will there be any survivors living happily ever after or has an ancient alien abducted a promising franchise?

Day by Day Armageddon: Shattered Hourglass is Book 3 in Bourne’s overall storyline, immediately picking up where Book 2, Beyond Exile, ended.

After an unknown anomaly turned once-living human beings into an undead terror that quickly spread throughout the planet, the United States government nuked multiple high-density areas, hoping to destroy them. Having enhanced agility, speed and cognitive function, the Zombies were practically unstoppable… and now they’re filled with radiation!

Our hero is an unnamed Naval officer who is referred to as Kil, short for Kilroy. Rescued by the remaining U.S. military troops and transferred to a fast-attack submarine, our hero speeds away to China with a new mission: To find and retrieve Patient Zero and hopefully end this fast-spreading pandemic.

Shattered Hourglass takes a radical departure from the previous two books of the Day by Day Armageddon series, in terms of storytelling. While Books 1 and 2 were basically told as a journal from the hero’s perspective — which played a huge role in making those books endearing to the reader — that style has been basically removed from Book 3. Also, this book focuses on so many different characters with complex storylines taking place simultaneously, our protagonist has been reduced to a secondary or even tertiary background character within his own novel. In addition to having many unnecessary plot lines that have no bearing on the story’s conclusion, there are many military acronyms to wade through, which sometimes gets confusing.

The author teased the reader with multiple mentions of Mega Swarm T-5.1, which intrigued me immensely… although it was never mentioned again. Instances like that happened all too frequently throughout the 326 pages of this book.

All of this, along with extraterrestrials that didn’t serve any purpose within the storyline, plus an anticlimactic ending, leaves this reader underwhelmed. Maybe there were too many individual pieces that just didn’t add up as a whole.

On the positive side, half of the book is a fun read, leading up to the final mission (which was a whiff). Bourne really knows how to describe weapons, fighting and military battles, which is appropriate, since he is currently enlisted as an active-duty officer in the U.S. Navy.

In the grand scheme of things, after reading three great Zombie books — World War Z, Pride and Prejudice and Zombies and Day by Day Armageddon — we were influenced to start this Webpage. Sadly, Shattered Hourglass pales in comparison to each of the previously listed books that we hold so near and dear to our hearts. Perhaps Bourne was in a hurry to end the series and got a little lazy. Perhaps he couldn’t meet the past expectations of his previous books, which were an undead hit with both fans and critics alike. Either way, this book really is a mess.

If you’re starting the series with Shattered Hourglass, I would highly recommend putting the book down until you read Book 1 and progress with the storyline in a linear fashion. The series continues with the short story, Day by Day Armageddon: Grey Fox, which we hope to pick up soon.

Strength: More Zombies and nonstop action…
Weakness: This time with unnecessary aliens and plotlines.
WTF Moment: Not one but two Asian characters with politically incorrect nicknames: Commie and Kung Fu.

Notable Quotes:
– “There ain’t no safe zones anywhere.”
– “The politics of death ruled America now.”
– “The lot of demons in hell couldn’t have frightened her more.”
– “Like a chorus of demons on Halloween night, they bellowed.”
– “Best to humor the chaplain and avoid any stray lightning bolts.”
– “The eager grunts of flesh hunger gave away the undead’s attack.”
– “You’ll be happy to know that the navy still runs on PowerPoint in the apocalypse.”
– “Soulless figures walked about, searching, reacting to the firings of dead synapses.”
– “Translucent gray fluid dribbled from its chin, hitting its bare and nearly skeletal leg.”
– “Congealed blood and eye jelly splattered his blade before the creature hit the radiated ground.”