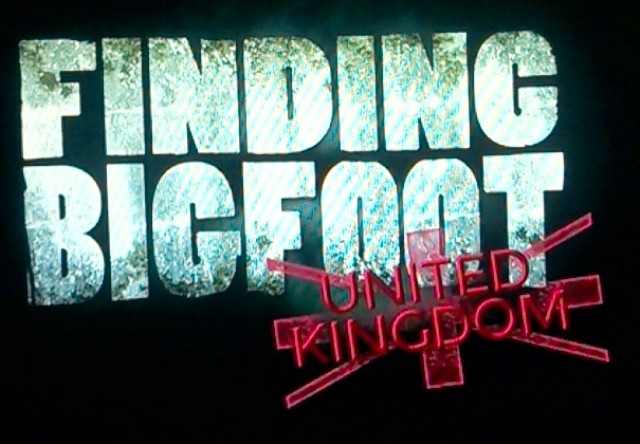 After searching for Bigfoot in seven countries and across three continents, the Finding Bigfoot crew has finally arrived in the United Kingdom.

No two investigations are ever the same for the Bigfoot Field Researchers Organization. Documenting their search for Sasquatch, Finding Bigfoot follows Matt Moneymaker (B.F.R.O. Founder), Cliff Barackman (Evidence Analyst), Ranae Holland (Field Biologist) and James “Bobo” Fay (Expert Field Caller), as they try to unequivocally solve the mystery that is known as Bigfoot.

With this television series having a rather odd weekly broadcast schedule on Animal Planet, it’s been very easy to miss new episodes. Before catching the group’s trip overseas, it’s time to catch up on recent episodes that I happened to miss.

–Squatching in the Midnight Sun:
On the their second-ever visit to Alaska, the Finding Bigfoot crew split up into two separate teams to visit Bethel, a small rural community and Fairbanks, large populated city, where recent reports of Bigfoot have occurred. However, the teams arrived in Alaska at the worst time of year to actually get any hard evidence of the “Hairy Man,” since it was springtime and residents usually get 20 hours of sunlight each day. Interesting to hear about the two campers who had their tent lifted off the ground by a mysterious-and-aggressive assailant, while they were inside.

–Squatchers Take New Jersey:
Joined by Bobcat Goldthwait (the comedian and director of the Bigfoot found-footage film, Willow Creek), the B.F.R.O. crew searches for Big Red Eye (what the locals call Bigfoot) in New Jersey. Talk about your odd, but funny, celebrity-guest choice.

–British Bigfoot:
This is the episode I’ve been anticipating for a while, now. The crew travels overseas, first to England, then to Scotland, where they hope to search the United Kingdom for Bigfoot. Attempting to navigate the roads of London, one of the B.F.R.O. members struggles with driving on the wrong side of the road. After arriving, the group learns about The Grey Man and The Green Man myths, which are both intriguing. For the first time ever, the group has a town-hall meeting inside a castle and they decide to split up to investigate separate reports. Bigfoot sightings are reported in England at Harwood Forest and Sherwood Forest and even in Scotland! During their search for Bigfoot in Scotland, the guys manage to navigate Loch Ness to search for Nessie, as well.

Bobo and Cliff are gifted kilts, so they hunt for squatches on a mountain top above Loch Ness, while getting eaten alive by midges. Both individual teams struck out, in terms of getting any evidence, but when they unite in Scotland, they received both visual and audio evidence, which was exciting.

As always, the most compelling element of the show involves witness reports, and sometimes there’s even some decent evidence, as well.

I’ve actually really enjoyed the handful of trips the B.F.R.O. group has taken outside the United States and hope there can be many more in future episodes to come. As we stated before, with these international hunts, Finding Bigfoot has become the new version of Destination Truth. Keep up the good work and safe travels, to all involved.

Strength: Bigfoot and Nessie hunting in the UK!
Weakness: Only a little evidence.
WTF Moment: Did Matt really hit another car and never stop to check the damage, while driving on the wrong side of the road?

Notable Quotes:
– “That’s a lazy Bigfoot.”
– “Everyone has a gun out here.”
– “You’re a natural-born knocker.”
– “He’s doing this one for the Queen.”
– “That’s a brown-bear disaster about to happen.”
– “It’s clear I’m the only one qualified to stand in for the Squatch.”
– “Texas ain’t got nothing on Alaska. Everything’s bigger in Alaska.”