Days Gone Lets You Live Out Your Daryl Dixon Fantasies

Today’s video game market is overflowing with Zombies. It’s almost as if there is an evil Alpha sitting at the top of the video game world who has decided to let loose the hordes of walkers upon the people of the world. Some have been great games, like most of the Resident Evil and Left 4 Dead series. Some have been total dumpster fires (not going to name names, but just look at the App Store on your smartphone or the cheap games on Steam). But one thing is true: People are just burned out on rotting corpses.

Glad I was right.

Days Gone pulled me in with its story, right from the start. After reading up on the background of the game, I wondered how they were going to make me care about bikers in the post-apocalyptic world. But they hit it great. Normally, I skip over storyline and go straight to game play, but I stopped and actually watched the story. In the first scene, you meet the main character Deacon (the Daryl Dixon archetype), his biker brother, Boozer, and Deacon’s wife, Sarah. With his wife and friend wounded, Deacon makes the choice of sending his wife away on a helicopter to help, staying behind to ensure his compadre lives. It was in this moment you see a side of Deacon that endears himself to you: He’s loyal to those closest to him.

Flash forward two years and the game really starts. Deacon and Boozer cruise around the land, basically working as bounty hunters. Society has collapsed after the Zombie Apocalypse, where the undead are known as Freakers. These mutants have lost all the pigment in their skin, along with any humanity they may have had. In their “pay for play” lifestyle, the choices the duo make sometimes would be seen as barbaric to a civilized world, but in this world you have to make choices that benefit you and screw the rest, if necessary.

Come to think of it, Deacon is almost a clone of Daryl Dixon from The Walking Dead. Let’s see: Loyal to his “brother” and the woman in his life. Rides a motorcycle. Carries a crossbow and hunting knife. Ruggedly handsome. And gets thrust into situations where he has to do things to survive, regardless of morals. 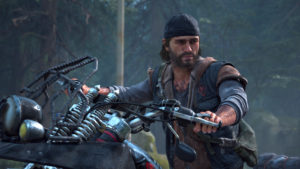 So, besides a good story, Days Gone has some very beautiful graphics. I don’t have a PlayStation Pro, but still this game looks amazing on my 1080p screen. Open-world games can get tiresome because all you have for long periods of time are just repeated graphics. And I know this is probably true in Days Gone, but I have yet to notice it. I am on day 800-something and it still feels fresh. Other games, like Spider-Man or even Far Cry, would have lost me. But Days Gone takes the post apocalypse and turns it into something that is both beautiful and gruesome, at the same time. 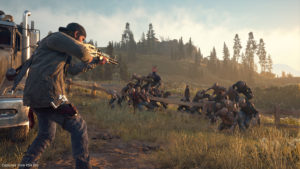 Everything about Days Gone sounds great, right? Well, unfortunately, the gameplay has a lot to be desired. I thought maybe I was the only person having problems in the game, since I am using an older PlayStation. But after watching some Twitch players and Youtubers, it became very apparent that I was not alone. The control of the character in the game just sucks. Driving the bike at the beginning is very hard to do, and your bike is the most important piece of gear you have in the game. I know it gets better as you advance, but it takes a long time of fighting the game just to steer your bike without wrecking.

Fighting also has little to be desired. It seems like aiming is incredibly hard, with headshots being miracles, rather than skill. And if your enemy gets close and melee is unavoidable, get ready for some issues. Many times I would be trying to chain hits, only to have the Freaker or enemy biker still be in his “damage pose,” causing me to miss and giving them a free hit on me. Be prepared to spend a lot of time running away and healing. And don’t even get me started with the hokey menu system in the game.

As I mentioned, the bike is incredibly important. You use it as your primary way of moving around, as well as your ticket to “Fast Travel” between locations. However, the bike you start the game with is brittle and hardly holds any gas. You spend a ton of time repairing the bike (it takes damage if you hit anything, which is nearly impossible to avoid with the control issues), as well as finding gas. I guess it makes sense with the “end of times” happening, but it is still more of a chore. The bike just needs some slight adjustments to let it have better gas mileage. I would like to go five miles without having to stop and find fuel. 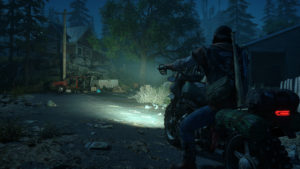 So, what score do I give Days Gone? I have to say it is a solid seven out of 10 stars. The story is great and offers many different storylines to follow. The world is visually perfect. But the controls are just flat-out horrendous, the menus are hard to navigate, and the meta game of “Excite Bike 2019” all greatly pull down this game. The great thing about these failures is that they can be fixed with some patches. So, all is not lost for this game, reaching out to be an eight or nine in the future.