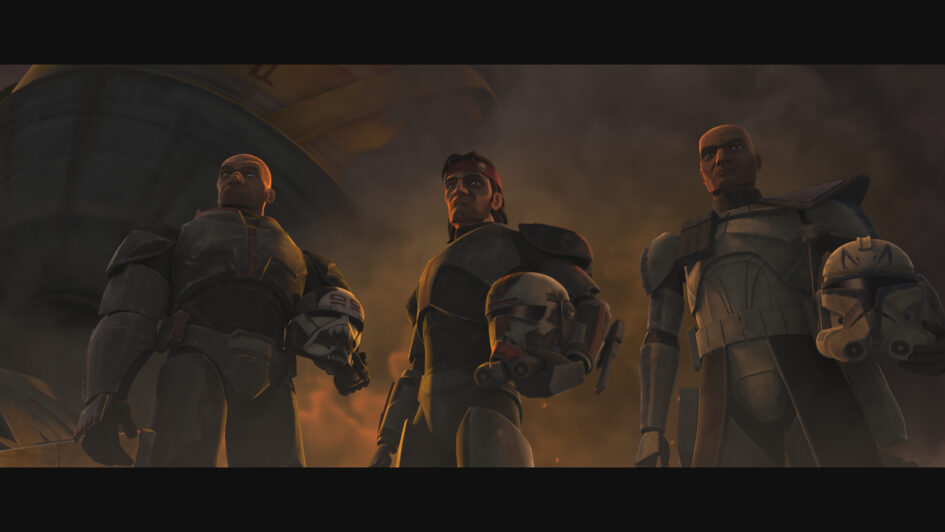 Per Matt
In the aftermath of Star Wars‘ latest series premiere, the galaxy has a new group of heroes… they’ve definitely got unorthodox ways, but their fight against the Galactic Empire is true. These clones share a bonding experience in Episode 2 of Star Wars: The Bad Batch.

“Cut and Run” immediately picks up where the previous episode left off. Seeking shelter, the crew seeks refuge with a former defector on a similar path. While moving forward with their mission, they attempt to address Crosshair’s complicated history. In addition to making sense of their former colleague’s inhibitor chip, they quickly learn that being a babysitter isn’t always fun and games.

No longer welcomed within the Clone Army, Echo, Hunter, Tech and Wrecker are joined by Omega, newly recruited when the team evacuated Kamino. Their family ties grow each and every time a weapon is shot into their general vicinity, but not much is known yet about the young girl.

It appears that Admiral (soon to be Grand Moff) Tarkin will function as the series’ Big Bad, which encourages me to watch more of the show. I’ve often mentioned the character was one of my favorite villains in A New Hope, but underused. Hopefully his reign as the main antagonist will last long enough to create an interesting backstory for the character and his appearances will be more than one-note performances.

I have truly learned to appreciate Showrunner Dave Filoni’s need to address complex issues. First in The Clone Wars and now in this series, he has fostered the development of great, new characters (and even improved upon some of Lucas’ originals). They’re as flawed as everybody else, but he doesn’t allow the audience to get bored with them. In addition, he’s done a pretty great job in dealing with the changing of allegiances, which can be a tricky plot device — although getting to the nitty gritty of Order 66 has yet to happen.

I look forward to seeing Captain Rex enter the fold, as he’s been previously mentioned a few times now, missing The Bad Batch by only one day in this episode. I’m sure he’ll bring plenty of exposition and flashbacks to fill in the viewers (as well as the team) about the Empire’s behavioral implants and the current need for chain codes.

After watching two episodes, I really feel the need for more Big Bads. Clone troopers are interchangeable. They’re a dime a dozen. They can’t remain the primary opposition for episode after episode. A little variety is needed. I’d rather not see any more Jedi (although Dark Jedi wouldn’t be bad), but why not throw some Sith into the mix? It would take a LOT for The Bad Batch to overcome one and that’s a story I’d love to see.

I also wouldn’t mind peeking behind the scenes to find Crosshair interact with the bad guys. Seeing a familiar face popping into a storyline that isn’t originally from the Extended Universe would also be incredibly welcomed!

The Empire’s grasp of the galaxy seems to be getting tighter with each new episode. Having the series begin to tie into the original trilogy would also lure this fanatical fan of Episodes IV, V and VI into becoming a die-hard Disney+ subscriber!