Doctor Who: The Magician’s Apprentice 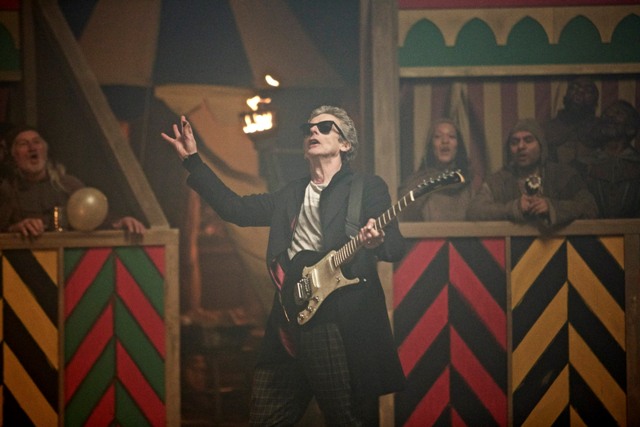 If you had knowledge a child would grow up to become a genocidal dictator, responsible for the deaths of billions, would you kill the child to save the many? Season 9 of Doctor Who premieres with this thought experiment become reality for the Doctor (Peter Capaldi in his second season as the Time Lord) and his longtime nemesis, Davros.

The Doctor finds himself accidentally on a war-ravaged planet on his way elsewhere. He finds a young boy is in the middle of a “handmind” field, hands with eyes on the palms sticking out of the dirt. One false move and the hands will grab the boy’s leg, dragging him to his demise. The Doctor throws his sonic screwdriver across the field to the boy and offers words of encouragement: “Your chances of survival are about one in 1,000, so here’s what you do. You forget about the 1,000 and concentrate on the one.” When he asks the boy his name, he responds Davros. The Doctor immediately freezes.

Fans of the series will recognize the name Davros immediately as the creator of the Doctor’s most-vicious alien adversaries, the Daleks, a race that has exterminated countless beings across the universe and time itself. The Doctor was responsible for the disappearance of the Daleks and his home planet, Gallifrey, in an effort to stop the Time War between the two races from destroying all of time and existence. Meanwhile, Colony Sarff, a snake-humanoid, is introduced, searching for the Doctor in the Time Lord’s various interstellar haunts. Sarff is working for Davros and has a message — Davros remembers.

Jenna Coleman returns as Clara Oswald for her last season as the Doctor’s companion. On modern-day Earth, she notices an airplane frozen in midair. Clara is quickly summoned to UNIT headquarters, where she discovers it is a worldwide phenomena. She deduces it is some type of message, and sure enough, the message is sent through the Doctor’s special communication channel from Missy, a rival Time Lady. Missy is masterfully played by Michelle Gomez, as almost absurdly insane and callously murderous. Despite her disdain for most living things, she has an intense love-hate relationship with her childhood friend, the Doctor.

Missy needs Clara’s help to find the Doctor, as no one is able to find him. Missy informs Clara the Doctor sent his Confession Dial — a Time Lord’s will — indicating the Doctor believes he will die. The two deduce he is spending his last night alive on Earth in the Middle Ages and teleport there.

In non-combative Doctor Who fashion, the Doctor “battles” an axe-wielding warrior by riding into a medieval arena on a tank, while riffing on an electric guitar, his axe. He has spent three weeks in the past, celebrating his last night, before his confrontation with Davros. Colony Sarff follows Missy and Clara to the Doctor, and delivers Davros’ message, along with the sonic screwdriver left with Davros.

The Doctor, Clara and Missy voluntarily go with Sarff to Davros. Without revealing more, Davros confronts the Doctor about their previous encounters, including the childhood encounter.

Season 9’s premiere, The Magician’s Apprentice, is rife with fan service to the 50-year Doctor Who history, including some of the most iconic villains: Davros, the Daleks, and the return of Missy. The episode uses old footage from the fourth, sixth, seventh and 10th Doctor’s brushes with Davros and has versions of the Daleks from the ’60s to modern day, complete with nostalgic color tones. On the contrary, viewers not familiar with the show’s history may be overwhelmed by the backstory. The episode also has a slow build, as it has to tell the Davros-Dalek backstory to newer viewers.

The premise for The Magician’s Apprentice comes right out of the ethical thought experiment voiced by Tom Baker’s fourth Doctor in 1975’s Genesis of the Daleks and replayed by a gloating Davros to Capaldi’s 12th Doctor. It was only a matter of time before the Doctor found himself in the very situation he imagined. But with time travel, anything is possible.

Con:
Relies heavily on series’ complex history, which may turn off new viewers. Episode slowly builds to catch up new viewers on the backstory.

Interesting quotes:
– “I try never to understand. It’s called an open mind.”
– “I approve of your new face Doctor. So much more like mine.”
– “Pardon my sci-fi, but this is beyond any human technology.”
– “I’ve also introduced the word “dude” several centuries early.”