When Don’t Breathe came out in 2016, I admit I really enjoyed it. It was a little weird rooting for people who had committed a crime and broke into a man’s house. But once we learned more about the heinous acts that Norman Nordstrom was doing, the lesser of the two evils became the emotional champion.

As a father, I can understand the pain that Norman felt in losing his daughter. My heart would break and I would probably lose my mind for a short time as well; however, kidnapping and basically raping the perpetrator is never going to be in the cards to be played.

It would seem that after he impregnated the hostage in his basement, he was going to deliver the child to replace his. What would be the next steps? Would he keep the woman alive, forcing her to be the mother to her unwanted offspring? Would he kill her in cold blood, taking on the responsibility of raising this newborn on his own, seemingly with no help? I am not sure Norman thought this out fully, and the first film doesn’t really give a lot of clues.

Yes, he did cry in anguish when the woman is accidentally shot and killed. But I feel he was grieving more for the lost child than her. And to make the hatred for him even more evident, he attempted to replace her with one of the people who broke into his house. Norman Nordstrom had no care for life or applying equal punishment for crime. He was hell-bent on having a child. This disregard for humanity made him one of the vilest villains in recent films. The only line he seems to have is with his dog and kids.

This is why I have problems with the sequel.

Don’t Breathe 2 picks up eight years after the events of the 2016 film. Norman Nordstrom (Stephen Lang) is raising an 11-year-old girl named Phoenix (Madelyn Grace). One day, Phoenix is followed home by a group of men, led by Raylan (Brendan Sexton III). After killing Norman’s dog, the men attempt to kidnap Phoenix but are hindered by Norman. Eventually, the gang overcomes the blind man, leaving him for dead.

Raylan and crew take Phoenix to a hotel, where Raylan reveals that not only that he is Phoenix’s true father, but that her mom is alive and sick. After a house fire, the family was broken up, and Phoenix was kidnapped by Norman and raised as his own. However, things don’t add up and Phoenix soon finds herself in a life-or-death situation. 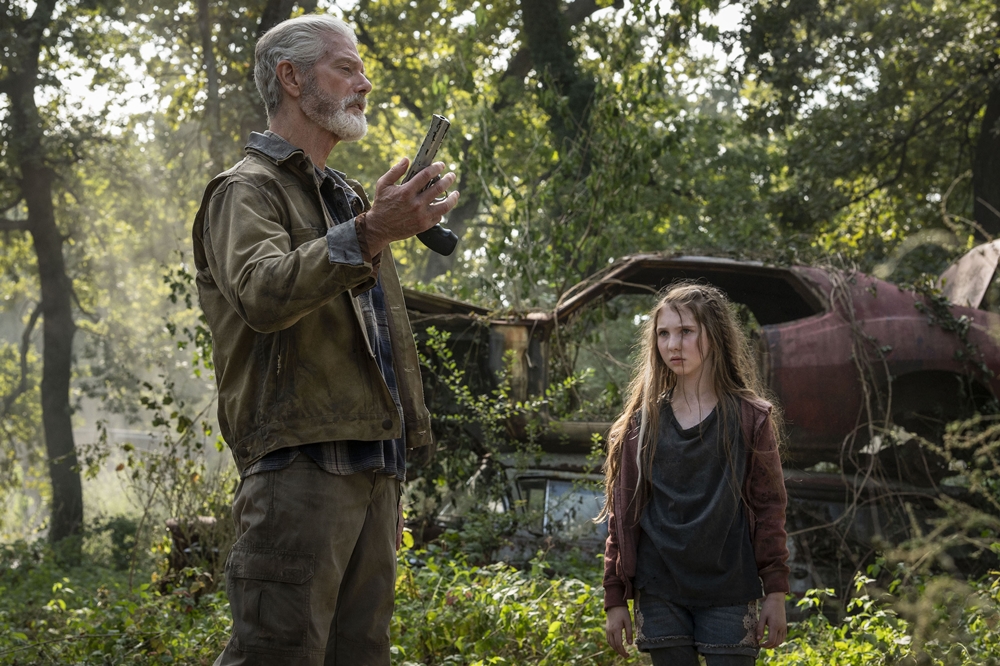 Director Rodo Sayagues helped write the original Don’t Breathe film, which makes the choices in Don’t Breathe 2 even more confusing. Rodo wrote Norman to be completely unlikable, devoid of humanity, in the first film. Yet, in Don’t Breathe 2, he actually has tried to make us cheer for the blind man. Maybe there was supposed to be a story arc here about redemption, but it is not written very well.

When Norman comes clean to Phoenix about his actions, he seems remorseful. But is his remorse for his actions or the fact that his “daughter of eight years” now knows part of his vile past? The writing and direction don’t take us through this. Remember, this is the guy who kidnapped one woman, raped her, killed her and tried to use a turkey baster to impregnate yet another woman. I am not sure the short few seconds devoted to his redemption even begin to fix the actions he has taken. It just doesn’t work at all.

I don’t want to cheer for this guy, yet that seems to be the path that Sayagues wants us to go.

Had I not seen Don’t Breathe, I may have sympathized a little more with Norman. In this case, ignorance is bliss. While he may have kidnapped Phoenix, her parents were not exactly raising her in a safe environment. It could be argued that Norman gave her a better life than she would have had with them. Heck, he may have even saved her life by abducting her. So, without the first film’s context to go on, Don’t Breathe 2 is a film where once again we have to pick the lesser of two evils, with Norman being the lesser in this case.

Don’t Breathe 2 could have been a much better film had they given us some sort of repentance angle for Norman. We didn’t get it, and therefore I don’t get why we need to cheer this guy on. He deserves to be reviled.