The Feast Serves Up a Banquet of Horror for IFC Midnight

I have to admit something upfront. I do not believe I have ever watched a Welsh film in my life. Since I have become a film critic, I have watched only a very few foreign-language films. Movies like the Train to Busan series and Let The Right One In are the only ones that come to mind. It’s strange, because each one I have watched has seemingly been brilliant. With my utter boredom of Hollywood and U.S. films, one would think that I’d be on the lookout for a little international in my search. But alas, that has not been the case.

Recently, I got to check out the Welsh eco-horror film, The Feast. Starring Nia Roberts, Annes Elwy and Julian Lewis Jones and directed by Lee Haven Jones, The Feast premiered at the 2021 South by Southwest film festival. IFC Midnight received the U.S. rights to the film, and it will be debuting on the service on November 19, 2021.

Making their money in the drilling industry, Glenda (Nia Roberts) and her husband, Gwyn (Julian Lewis Jones), plan a dinner party for some guests, hoping to secure a deal for more rights. Their sons Guto (Steffan Cennydd) and Gweirydd (Sion Alun Davies) focus on their own vices, completely without regard for anyone and everyone other than themselves.

As the day continues, Cadi (Annes Elwy) arrives, sent to the house as a maid for the party. It does not take Cadi long to realize how shallow and tone-deaf the entire family is, especially in regards to the environment. Little do Glenda, Gwyn, Guto and Gweirydd know that their lives are going to change forever during this meal. 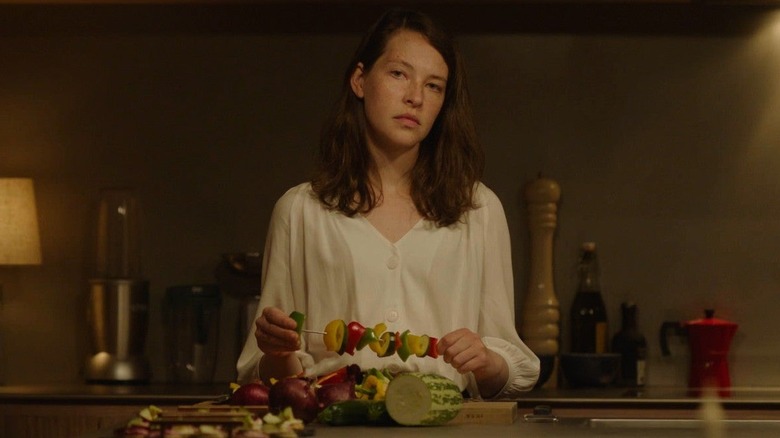 The first thing that jumped out at me about this film was the Welsh language. As I don’t think I have even heard it spoken before, it added a little extra uneasiness to The Feast. The film has a very slow burn, but the angst builds at a very methodical pace. You know something is off, but it is hard to fully understand until it is too late. This build-up pulls viewers into this awkward world nicely.

The slow pace of the film is its greatest asset and greatest folly at the same time. I know that sounds oxymoronic, but stick with me for a minute. Basically, the glacial movement of the plot gives plenty of time for viewers to get wrapped up in the backstory of the family. You get to know them better than you really want to. While you don’t get much about Cadi, you still get the hint that she is bad news for them.

However, this turtle pace really makes the film feel drawn out. We have no real choice but to go along with the ride. The payoff is horrifying, but kinda felt a little less than what it should have been with the build.

The Feast gets four out of five stars. The only thing pulling this film back from a perfect score is the speed. It plods along slowly and will lose much of the audience before the climax. Still, if you know this going in, you will probably love the movie for all the reasons I have given.

Check it out on IFC Midnight starting on November 19th.