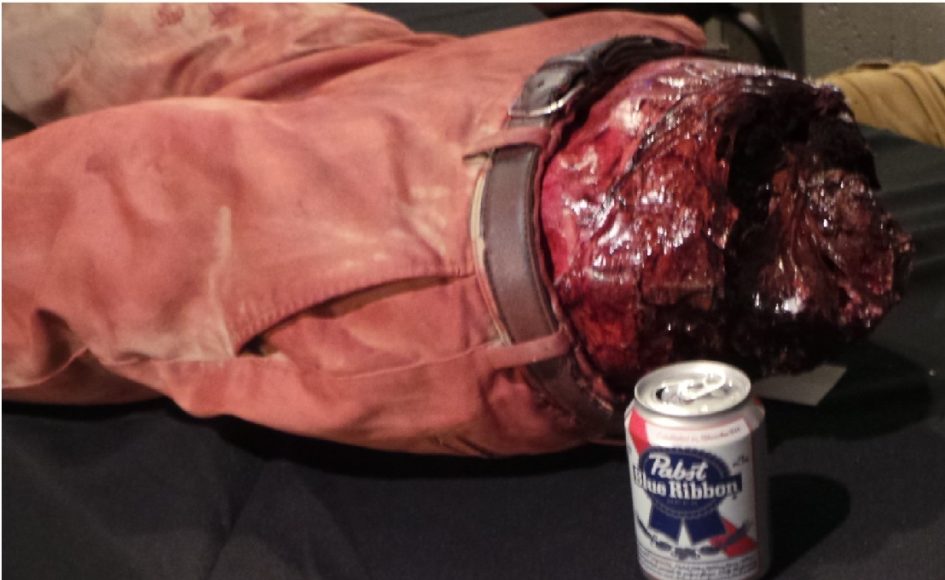 There’s something surreal about walking into an upscale bar to find The Tick and Wonder Woman sharing a drink, while Wolverine sings karaoke. But that’s exactly what happened as I stepped off the elevator into Nikolai’s Rooftop. Overlooking the Atlanta skyline with a view that would make any superhero proud to stand aloft, what had started that morning as panels, events and costumes on parade had become the biggest single party I’d ever attended in my entire life. Boarding the elevator once again, I was passed by Shaggy and Hunter S. Thompson as they took my place at the bar, knowing that things were about to become truly wild.

For newcomers to the con — as I happened to be — it can be a bit intimidating. I walked into the megalithic interior of Atlanta’s Hyatt Regency, a marvel of architecture and beauty in the heart of the busy Delta hub and found myself adrift in a teeming sea of heroes, villains, bizarre creatures and creations hurriedly making their way to the far-flung reaches of the convention, where they’d shop, learn and participate in an array of interactive panels and events across the wide spectrum of fandoms represented under the Dragon Con banner. It was a fun, fast-paced, exciting environment that seemed to have a life all its own. In fact, in the non-stop action of the day, there was only the briefest of pauses taken as events shifted from the family-friendly, all-inclusive celebration to a more adult-oriented party. 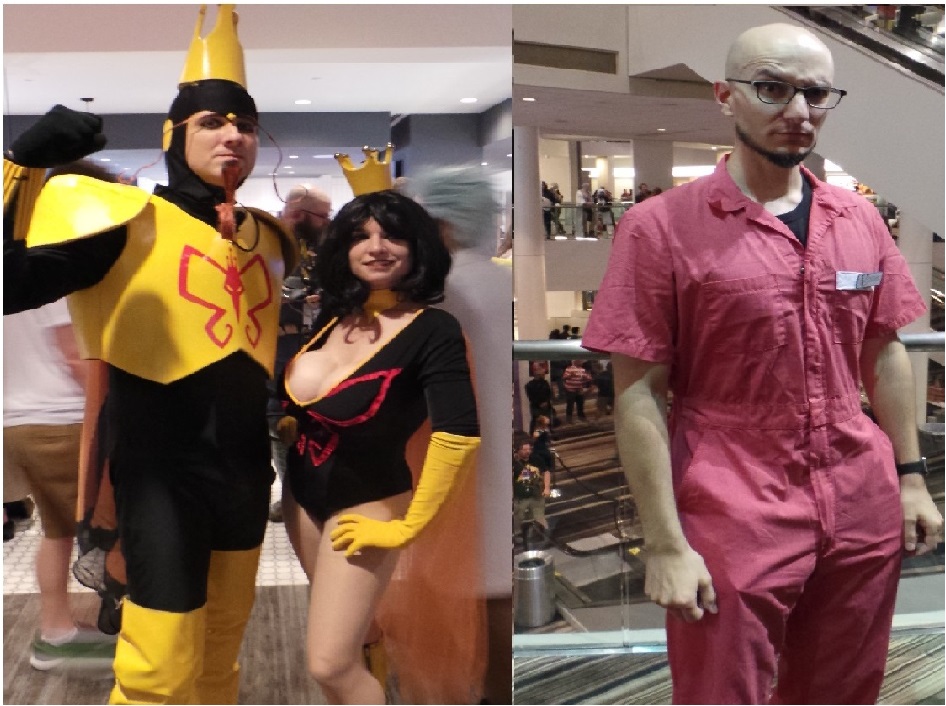 Everyone is friends at Dragon Con. (Left to Right) The Monarch and Dr. Mrs. The Monarch; Rusty Venture.

I’d crossed the sky bridge from Hyatt to Marriott at nine that morning, entering what several conventioneers referred to as “The Food Tube” and, by seven that same evening, the massive spiral of hotel rooms, conference halls, and layers of bars and vendors had become the biggest party I’d ever seen in my life. Thousands of people in the same amazing costumes I’d seen that morning, as well as many more that I’d missed were all dancing, drinking and reveling in the rainbow banner of fandoms that had come together. Each floor had a different atmosphere, with an epic dance off happening on the main level of the Marriott while, below it, vendors in booths were still taking selfies and shots with fans. From the tenth floor observation deck, you could get a bird’s eye view of the entire affair and I found myself with a can of Pepsi and rum playing “Where’s Waldo” in the crowd. 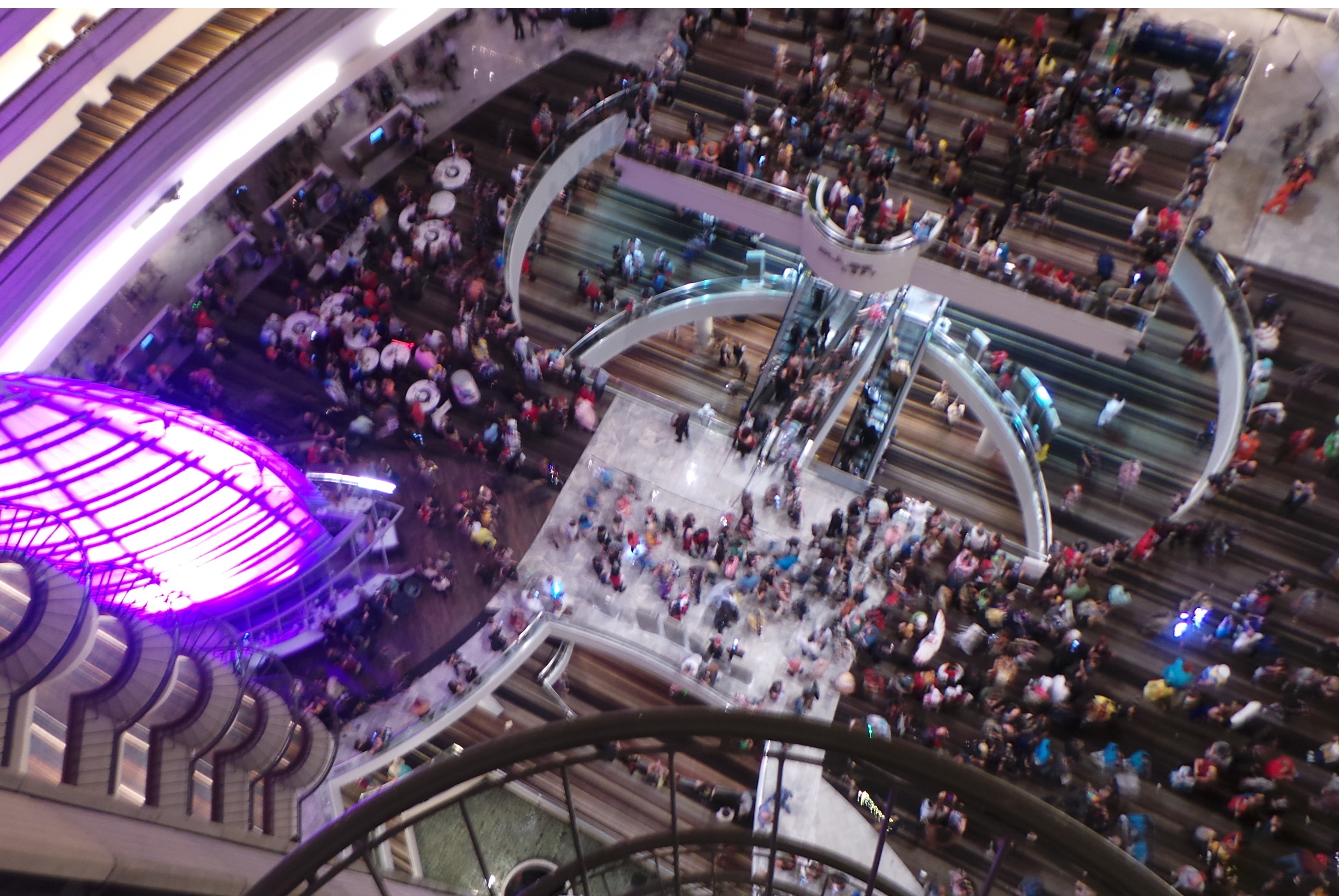 Where’s Waldo?
View from the Marriott’s tenth Floor. Not pictured; the other 80,000 people in attendance.

Crossing another bridge from Marriott to Hilton was like entering an entirely different level in a video game. The air was electrically charged with a DJ blasting out party anthems under strobing laser lights. Further into the hotel, away from the rave atmosphere and thumping dubstep, a more relaxed environment found the likes of The Monarch and Doctor Misses The Monarch reclined by a large table conversing with other costume-clad heroes and villains while a giant Reptar chased R2-D2 through the hall. It was nearly one in the morning and the atmosphere was becoming more sedate as fans and partygoers began to disperse to individual rooms. Some were off to bed to rest and recover from the night’s debauch, while many were still looking for places to keep the party going.

Dragon Con has a reputation in the fan community of not only having some of the best cosplay anywhere in the nation, but also having the most fun and exciting party atmosphere of any con. Sipping from a jar of cherry pie — a con staple I’m told — I had to agree. Never in my life have I seen so many of these fantastic characters and worlds come to life and to experience all of it in one place at one time and in such an energetic celebration was beyond words. Truly, there’s nothing quite like it anywhere else on Earth. If you missed out this year, don’t worry. Dragon Con will be back next year.

Until then, be sure to check out all of my coverage at Danno Does Dragon Con. 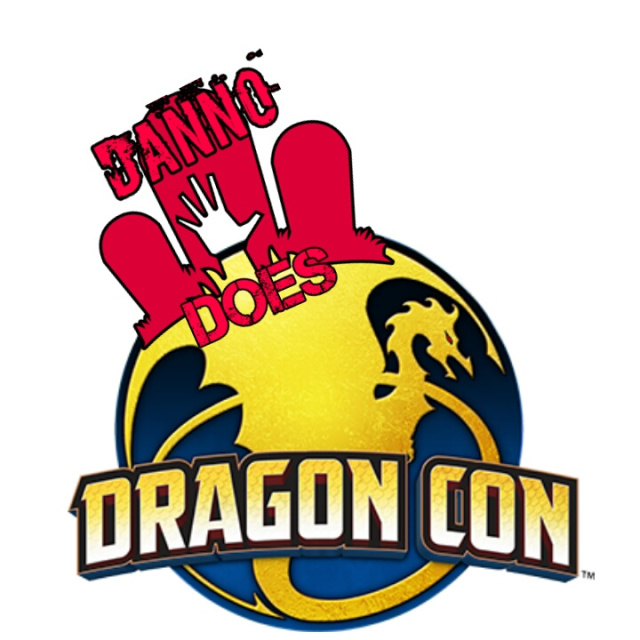 Danno Does Dragon Con 2017! A completely unlicensed logo to celebrate my invasion of Atlanta.