The Orville Tries to Boldly Go 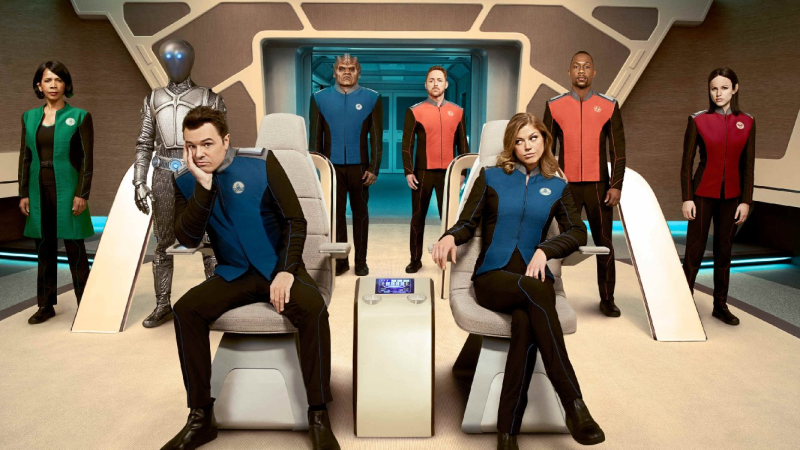 The Orville is the new hour-long space exploration series from Family Guy creator Seth MacFarlane. Taking cues from Star Trek and Galaxy Quest, the TV show centers on new Captain Ed Mercer (played by MacFarlane, himself) and his ship the U.S.S. Orville. The pilot episode (titled “Old Wounds”) follows Captain Mercer, as he meets the crew of his ship, which includes his ex-wife Kelly Grayson as Executive Officer, and completes his first assignment.

It’s no secret that Seth MacFarlane is a huge fan of Star Trek, and his love for the sci-fi serial shines through in The Orville. In fact, the episode largely feels like an episode of Star Trek: The Next Generation, but with approximately 1,000 percent more penis jokes. And that is where the biggest issue with The Orville arises. MacFarlane’s brand of juvenile humor makes sporadic appearances throughout the episode, making the tone capitulate wildly between a somewhat serious drama and a blue-collar workplace sitcom.

This disparate voice makes it difficult to pin down what type of series this is meant to be. Sometimes the jokes land, and can be very funny. I particularly enjoyed Lt. Malloy’s (Scott Grimes) combat simulation. There is an amusing and fast-paced back and forth between Mercer and his ex (Adrianne Palicki), where they mock what appears to be a useless invention. The jokes are funny, but the pacing and tone of the sequence is jarring against the more down-to-earth part of the episode where they occur.

The Orville owes a lot to Star Trek: The Next Generation, from the color palette, to establishing shots, to the sweeping score. In fact, “Old Wounds” lifts at least two or three story beats directly from “Encounter at Farpoint,” that series’ pilot episode. Unfortunately, that imitation also creates a bit of glacial pace for the storyline.

This new show owes so much to the Star Trek franchise, and the humor seems so intermittently placed that I have a theory. Seth MacFarlane didn’t want to make a sci-fi comedy. He wanted to make a serious space exploration drama, but since making a TV show is expensive the funding was contingent on one thing: making with the funny. And since making this kind of show has been his dream for a while, we were presented with this show of two faces. On one hand, it is the earnest space exploration drama. On the other, it is more what is expected from MacFarlane: jokes and more jokes.

And honestly, if my theory is correct, he should have held out for more money. The Orville looks cheap. The sets are sparse and empty, and the CGI is under par. The uniforms look like Halloween costumes. But that isn’t to say that the designs aren’t interesting. I really dig the overall look of The Orville itself, and the uniforms have a nice design, they just look cheap and ill-fitting.

Overall, The Orville isn’t bad. It is just suffering from an identity crisis. If the pace can be sped up, and the two tones reconciled between each other (although this may be far easier said than done), it has the potential to be a fun romp through space. Just don’t expect it to take you to places you’ve never been before.