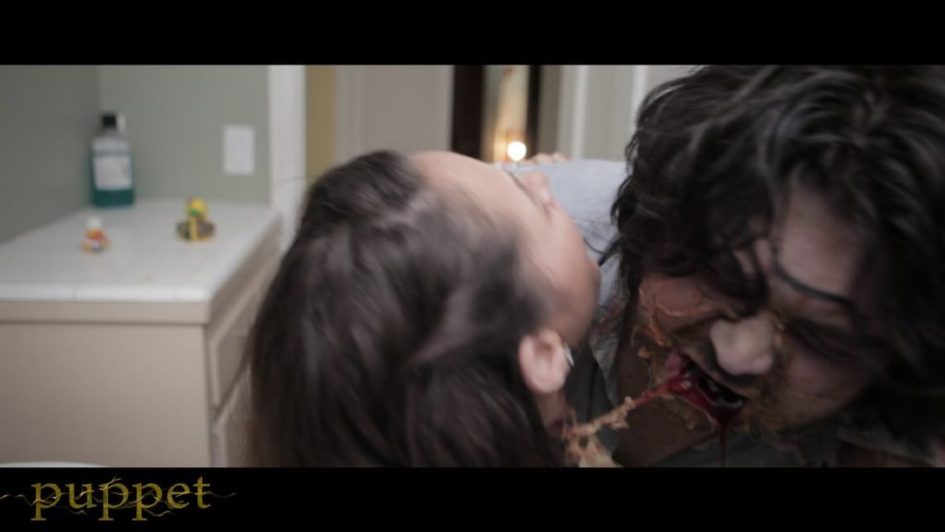 Directors Brian Gerson and Joseph R. Davis’ third short horror film, Puppet, has gained some recognition in some of the small film festivals both domestically and abroad. It won Best Makeup in the First Quarter Enginuity Film Festival and was also nominated for Best Makeup, as well as Best Horror Short in the Action on Film 13th Annual International Film Festival. The project took much of its talent from a pool of actors and actresses registered with the Screen Actors Guild. The cast includes Tara Cardinal (Jane the Virgin), Leah Ann Cevoli (Deadwood), Matt Jayson (Chuck) and Berna Roberts (Meet the Fockers, War of the Worlds).

Like most Zombie genre films, Puppet mixes social commentary with horror elements. The societal critique in the short film pertained to toxic fundamental religious circles. Emery (Tara Cardinal) is a non-religious woman, unwittingly brought along to a bible study by her sister and her significant other. The parishioners don’t display the warm and welcoming form of Christianity that most evangelicals display, nor do they preach a hellfire-and-brimstone sermon. The message lies between the two. Tara’s sister and friends guilt her in doctrine reading from the gospel verses like “Deny yourself, take up your cross and follow me.”

From the get go, Tara refuses to take part in group prayer and tries to hide the fact that she is a lesbian. After the prayer, one of the friends, Dan, opens up a bottle of tonic, indigenous to the Amazon, and offers it around, though no one partakes but himself. He claims to have received it from a guide while he and his wife took a vacation in Brazil. After the group’s fellowship and attempted conversion of Tara, the tonic shows ill effects on Dan before he transforms into a pale, vein-popping Zombie-like being.

The mysterious tonic concoction is a new spin on the Zombie genre. But the Zombie genre has grown accustomed to evolving over time. Zombies have come in many forms, such as reanimated undead, virus-infected sprinters and Voodoo-controlled beings, which seems as close to Puppet’s premise as any subgenre.

While Puppet has chosen a unique premise and societal analysis for its plot, it permits hardships that many horror films come across. The main one being: How does the supernatural force overpower characters living in the modern world? Back when horror films first came about, a blown tire, isolated location and a severed phone line was enough to suspend disbelief that characters had all odds against them. Cell phones, modern security systems and advanced weapons have challenged these tropes. Puppet, however, asks the viewer to suspend disbelief further. The opening to the film is a montage of a bustling city. Once Dan succumbs to the zombification process and attacks his wife, the group has ample time to call the authorities or even take him out themselves. In one scene, Emery’s sister, Telia, attacks her after turning into a Zombie. Just before this, she is being comforted by her husband, Jeremy, while Emery is under attack. Jeremy chooses not to help her, and conversely becomes enraged and attempts to choke her to death after she kills Telia, defending herself.

What really works for Puppet is the visual and special effects. The editing is superb and creates great cinematography. Scenes with whitewashed image cuts paired with static sounds creates a distinctive style for the film. The blood effects, skin lacerations and Zombie makeup also really benefit the film. Bite wounds consist of sticky-looking yellow mucus matching the veiny complexion of reanimated victims.

In all, Puppet feels like the opening to a larger plot. It has a few fresh takes on the Zombie genre and follows the trope in certain ways, as well. Earning nominations from various short film festivals signifies great things for Davis and Gerson in future films.