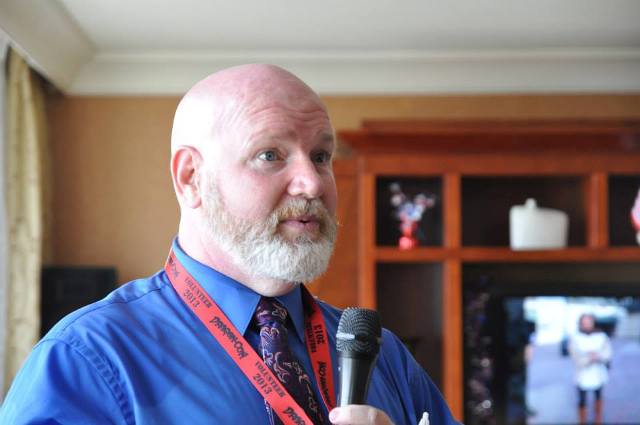 Per Matt
With more than 400 actors, artists, authors and creators scheduled to participate at Dragon Con and interact with their fans this year, it’s going to be a very busy four-day weekend. From August 29th to September 1st in Atlanta, GA, the convention offers entertainment options from every genre imaginable.

Director of Media Relations Dan Carroll assists all reporters and photographers covering the convention, but that’s only a portion of his job description. In our interview, Mr. Carroll previews Dragon Con, discusses current media policies and gives helpful hints for enjoying the upcoming event.

I really like the new Dragon Con logo. Can you tell a little about the background behind it?
– “Since Dragon Con is now owned by Dragon Con, Inc, a new logo was needed to celebrate this new era! Working in stealth, our board commissioned and selected this new logo. Personally, I find amazing.”

With a new name and a new logo, Dragon Con feels like a brand new convention this year. Was that the intention?
– “From where I stand, Dragon Con continues to embrace the best of what drove the growth in the past 28 years: gaming, comics, film, TV, art, music, and so much more, as fans come from around the world to share their fandom with their friends. Dragon Con continues to be that core family we always were, but we are ready (as always) to adapt and stay current.”

Atlanta seems to be home to amazing steampunk, cosplayers and a Zombie culture, all on display during Dragon Con. What do you attribute the creativity of the city?
– “Atlanta is a city of ‘doers.’ There’s an old joke that you ask a Savannahan what they will drink and an Augustan who their people are. In Atlanta, you ask ‘What do you do?’ It’s a dynamic city built on a train line and people are always getting involved. In another sense, because we are focused on doing our things, we are very accepting of other folks doing what they do. We have a vibrant theater community, an active and robust gay community, and myriad examples of how the off beat is allowed.”

“We were just named the geekiest city in the country, based primarily on the impact of Dragon Con, but also because the number of advanced degrees and book stores!”

With a few main characters of Heroes of Cosplay living in Atlanta, can we expect the TV show to be filming at Dragon Con this year?
– “That’s a great question, but no. We will have Riddle from HoC, but there will be no official shooting.”

What is the expected attendance of Dragon Con this year?
– “This year we expect 62,000 in attendance.”

What is Dragon Con’s harassment policy? What should people do if they see something inappropriate?
– “If you are victim of harassment, please go to security, the information desk or find a Dragon Con volunteer. All victims of harassment are to be taken to Security and will have a chance to talk with a member of the APD.”

“We take harassment seriously and have recently been recognized in the press for taking significant strides in both getting the word out, and protecting our convention goers.”

Last year, Americasmart housed the vendor room for the first time. How did that transition go?
– “It went well for a first-year effort. Using our principle of continued improvement, this year will be include maps and color coding to help shoppers navigate the nine football fields of vending.”

What is the best time to prepare for the Dragon Con parade? Where would you recommend people to go to watch it?
– “The parade starts at 10, but we recommend folks come early to secure a good space. With a mile of marching space, anywhere along the parade route will be amazing viewing.”

Have there been any changes to the media relations rules for the 2014 convention?
– “Dragon Con is not a media event, it’s a fan event. In response to that we limit media interaction directly with guests, to allow guests to interact with fans. We have had to limit the number of reporters who interview guests by a considerable amount, and yet we still ended up with more interviews than other.”

“Because the fan interaction is sacrosanct at Dragon Con, we have also had to enforce limits on reporters at the Walk of Fame. Otherwise our emphasis, as always, is spreading the joy that is Dragon Con, while protecting the dignity of our members.”

“I have a long career in communications and message management in corporate sense. When the opportunity arose, I applied for the Media Relations director, having just completed an internal promotions campaign for a large telecom company.”

What are you most looking forward to this year?
– “Seeing my wonderful reporters again!”

How will you be spending your Dragon Con this year?
– “As always, I will be working! I have a schedule made up that keeps me busy from 6 AM to well into the evening. My limited free time will be spent with friends doing quiet things!”

Is there anything else you’d like to add?
– “Yes! Go to the website, WWW.DRAGONCON.ORG for more information.”