Previewing the Taste of Tennessee Festivals 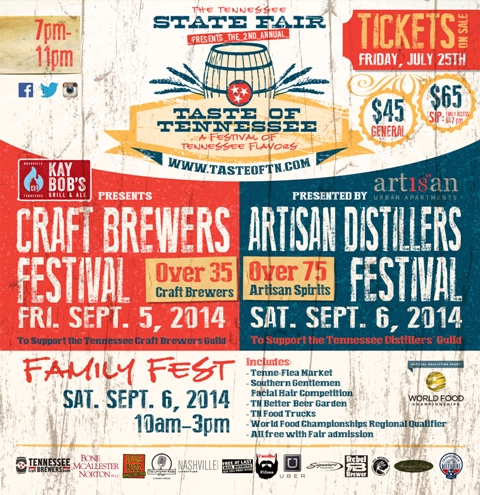 Per Matt
This year, the Tennessee State Fair will be highlighting local craft beer and artisan spirits in two separate festivals. On Friday, September 5th, The Taste of Tennessee will be featuring the Craft Brewers Festival and on Saturday, September 6th the Artisan Distillers Festival will be taking place. I asked Tennessee State Fair Association Development Consultant Cary Ann Fuller a few questions to prepare for both festivals, as well as the upcoming fair.

What’s the background behind the Craft Brewers Fest? How did it get started?
– “Last year, 2013, I contracted with the TN State Fair as a Development Consultant. Due to the late date of the contract between the TN State Fair Association with Metro and the State, corporate sponsorships were difficult to obtain, so I started looking towards an event to broaden the Fair’s demographic. I met with Yazoo and in a casual conversation was informed that the TN brewers were not participating in one of the larger summer beer fest events in Nashville. That conversation sparked the idea of creating a Tennessee-only event to benefit the Tennessee Craft Brewers Guild. That was less than 90 days before the Fair started! I got on Google and started ringing up every brewer in the state. They were all completely on board with a Tennessee event and Taste of TN was born. We had about 20 brewers last year and will have about 35 this year.”

Will there only be breweries present based in TN participating?
– “Yes, both the brewers and distillers events are Tennessee-exclusive (and inclusive).”

What do you attribute to the growing craft-beer scene in Nashville and throughout the state?
– “I think there’s several reasons. 1- The local ‘movement’ has encouraged folks to find products made closer to home and to support their neighbors’ businesses. 2- Craft beer is more readily available in large varieties in bars, taprooms and restaurants with educated staff that are more than happy to find a ‘starter’ beer to help convert a big beer drinker… or a no-beer drinker like I was just a year ago. 3- The local craft beer is just damn good. Once you go craft, you don’t go back.”

The price of admission also includes entry to the TN Fair. Can you tell me a little about the entertainment throughout the weekend?
– “Saturday, September 6th from 10-3, Taste of Tennessee is going family friendly with a variety of events. We’ll be hosting the World Food Championships Music City Cookoff, a Tenne-Flea Market of all Tennessee-made products, the Southern Gentleman Facial Hair Competition and more! All of these events are free to the Fair-goer. And the State Fair is FULL of entertainment. Opening weekend includes Opening Ceremonies, equine events, livestock shows and Southeastern Championship Wrestling, in addition to the many events happening within the Taste of Tennessee Festival.”

Kay Bob’s Grill and Ale is hosting the beer fest. What kind of presence will they have?
– “Kay Bob’s has been a fantastic partner for the Craft Brewers Festival. Leading up to the event, they’ve hosted a ‘Taste of Tennessee Volunteer Draft’ once a month. The last of these events is next Monday, August 25th and includes a total Tennessee Tap Takeover — all 24 of their taps will be Tennessee beers! We’ve even brought in some out-of-market brewers. This month will feature Wiseacre from Memphis, Ole Shed from Tullahoma, Blackhorse from Clarksville and some rare out-of-brewpub appearances by both Boscos and Cool Springs Brewery. 102.9 The Buzz is on site with a live remote, hosting an epic Rock/Paper/Scissors battle for the chance to win Festival tickets and beer for a year from Kay Bob’s. Kay Bob’s will also be out at the Festival with delicious food for all of our events!”

I’m very interested in the Music City Cookoff. Can you tell me a little about that event?
– “This was another casual conversation turned big idea. Early this winter, I reached out to Mike McCloud, the President of MMA Creative. We had crossed paths at some time in the past and I heard he was involved with the World Food Championships (he’s the co-founder). We met for coffee. I ran some ideas by him about what I was envisioning for the expansion of Taste of Tennessee. I really wanted to add a food component to the event and was considering a BBQ contest. After giving him the outline of my concept, he told me about starting regional qualifiers for WFC, wanting to have one here in Nashville, and the rest is history. Basically, contestants can enter one of three categories to compete in a live-cooking competition hosted by Goo Goo Cluster and the winners receive automatic entry into the WFC in Las Vegas in November, for their chance to win part of the $300,000 prize purse.”

How can people enter the Cookoff?
– “Easy!”

I believe the Artisan Distiller’s Festival is new this year. How did this event get started?
– “This is the first year for the Distillers Festival. It’s something that I knew I wanted to do last year, but with the time constraints, pulling off the Craft Brewers Festival was a feat in itself. It started much like the Brewers Festival. I started searching for Tennessee distillers, ringing them up and getting them excited about their very own event to benefit their brand new Tennessee Distillers Guild. Like the Brewers event, the makers of the products will be on site to serve them and talk about their processes, brands and histories. These are both really unique events in that respect. Taste of Tennessee was created to showcase Tennessee products and the people who make them.”

Do you think the TV show Moonshiners helped make Tennessee Whiskey and liquor more popular throughout the state?
– “Haha! No, not really. Moonshine has always been around, if you know who to ask! The surge is due to a huge change in the way the laws were written in Tennessee. Prior to 2009, it was legal to distill in only three counties and there were only three distilleries. As of February 2010, when the new law was enacted, an additional 41 counties were open to legal production. Tennessee now has about 30 brands, that I know of, and I’m finding out about new ones every week. Also, the local movement doesn’t stop at produce and craft beer. Why not drink a Tennessee whiskey, made down the road by folks that will gladly show you through their distillery?” 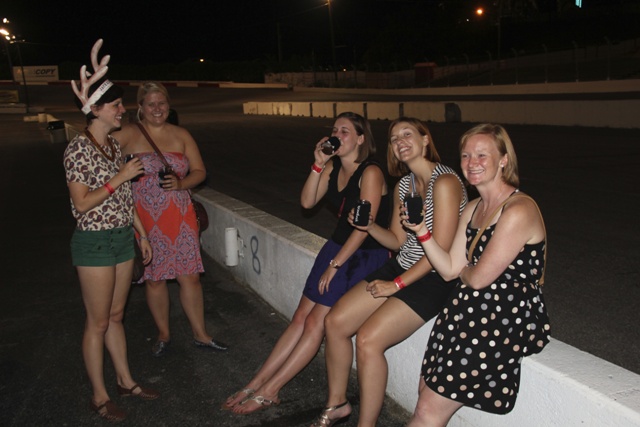 BeardForce Films will be showing its award-winning film, Straight Up: Tennessee Whiskey at the event. Will the producers be present to discuss making the movie?
– “Absolutely! Eric Byford and his partner, Caleb Watson, will be at all three Taste of Tennessee events on Friday and Saturday, showing the film on the hour during the Festivals. BeardForce Films is also hosting the Southern Gentleman Facial Hair Competition. We’re really looking forward to that! This was another one of my random calls/casual conversations turned perfect addition to the Festival and Fair. I guess that’s a running theme with me… I’m an Army Brat and not afraid to talk to anybody and ask them for anything. Sometimes they say yes!”

The fair will be offering a beauty pageant, live music and eating competitions. Where can we get more information?
– “Must-see events

Is there anything else you’d like to add?
– “I could talk about these events all day! First, I encourage people to go ahead and buy their tickets. Buy VIP tickets if possible — 100 percent of the upcharge for those tickets goes to the Guilds to help support, promote and protect their Tennessee industries. Laws have come a long way in the last few years, but there’s still a lot of work to be done to help these products get to market and stay competitive. Also, the brewers and distillers will be bringing out some pretty special products during that VIP hour! Every General Admission ticket will include a $5 Guild donation. The Listening Room Cafe is providing all of the musical entertainment for the stage. Food trucks will be on hand. I’m a little biased, but this is going to be a blast of an event and unlike any other beer or whiskey fest — All Tennessee, All the Time. Did I mention that all of this takes place on the infield of the Fairgrounds Speedway??”