It’s OK, EA. You like money. We all do. Just admit it. It is totally fine to be honest with your customers about what drives you. After all, you’re in business to make money, not glorified interactive fan fiction. (Fifty Shades of Rey?)

What’s that? Oh, you’re “respecting the canon” by focusing on the original trilogy? OK, cool. So… you’ll be making a game where we can’t play as Boba Fett or Vader in levels where they never ventured in the films? Or make it where we can’t stand on the mouth of a Sarlacc without taking any damage? Oh, wait, I got it. You’ll eliminate Palpatine from missions for which he never would have stepped outside the Death Star?

Or you could just say you like money and you’re going to do what’s most sensible for a gameplay experience that also gives you a sustained revenue stream.

By now, you’ve all probably guessed that I’ve decided I was not unleashing my not-so-well-hidden smart-ass tendencies nearly enough here on The Stump. This topic seemed like a great opportunity to play around with that aspect of commentary. After all, EA is not the only one deserving mockery here. 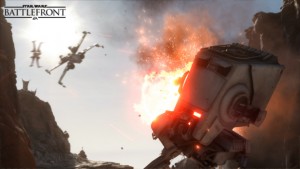 All those who somehow took away an assumption that Battlefront would one day contain Episode VII and ongoing added content are certainly the other side of the coin. As much as EA is poorly masking their own greed, these players are presuming a lot based on not much more than their fandom hopes. Of course, we all agree it would be cool, but do you really expect EA to just issue one game and then keep filling up your hard drive with expansions, while never updating the tech of the game? Let’s get real: We’re all going to be uttering phrases in 2019 like, “Man, that looks like old Battlefront I gameplay. It’s not even 8K.”

You know what feature I’d probably pay $15 for, all on its own? The ability to not have to switch the damn teams right when I just got used to shooting at Rebels.

The fandom’s well-placed grousing is the valid complaint that somehow leaving out material is a protection of the canon. It’s not. But it is a great way to make sure you can release a separate game for Episodes I-III and make $49-$119 a pop, once again. And who won’t buy that, just for the chance to rack up headshot bonuses on Jar Jar? 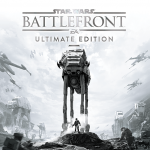 By the looks of things, the folks who paid for the high-dollar edition of the game in advance, or who have been waiting for the DLCs to land along the way, are indeed getting something that’s worth their money, based on the recent announcements from EA. Beyond that, it’s just wishful thinking. And that’s fine! Wish away! I wish my pants had Siri, but Apple is under no obligation to make pants.

Yes, we can each name a game publisher we wish had been blessed with this franchise other than EA. If there ever was a game peddler who was the lightning rod for the most ire, it might very well be them. Yes, their bone-headed EA Account tie-in is an annoying layer of gaming life on systems where we already have to be logged in. Yes, most of their decisions seem less about the content and more about the Benjamins.

And yes, it is fun to mock them when something as transparent as running a business is thinly disguised behind the false nobility of the much-abused “canon” escape-route. At the end of the day, we have a pretty great Star Wars game to play, which was and is no more obscenely priced than anything else in modern gaming. You’ve probably blown money on much worse.