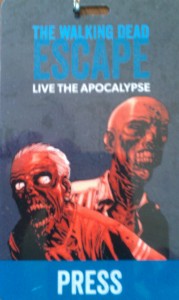 Per My Brother:
For the very first time, the 2012 edition of San Diego Comic-Con offered a zombie obstacle course. Based just a few blocks away from the San Diego Convention Center in nearby Petco Field (home of Major League Baseball’s San Diego Padres), and sponsored by AMC’s hit show, The Walking Dead, this attraction can be summed up as a first-person embodiment of an action-packed storyline.

Imagine a zombie outbreak happening before your very eyes… and what actions you’d take while being chased for nearly 30 to 45 minutes by the undead. At the beginning, there’s a ill-placed sense of calm, with security forced corralling the zed with leashes, chains and collars. But when the zombies escape and overrun their handlers, the chase begins. Attendees begin by climbing 10-foot wooden ladders and 10-foot cargo nets, fleeing the undead any way possible, on slides, climbing over and under obstacles, sometimes even using other attendees as a sacrifice just to get to the other side.

This obstacle course was cleverly designed by an expert Set Decorator. Destroyed vehicles, passing garbage, sacrificed bodies and lots of blood envelop the arena. Televisions even broadcast fake newscasts of other outbreaks happening at the same time, continuously looped.

Along the way, attendees get a few rest areas, where chairs and cups of water await those short of breath for a quick pause. Unfortunately, I found myself out of shape and lacking my Albuterol inhaler, so I was definitely zombie fodder. I’d run for my life for a bit, pass a bunch of attendees, pause to catch my breath, then found myself the last of my group. Inevitably, my running-pausing-wheezing routine caught up to me (and so did the zombies!).

Many of the zombies were great actors. Some hid behind objects just like in a haunted house, scaring those who passed. Others minded their own business, feasting on carcasses. And the remainder simply followed all attendees (some chasing, others limping, many failing).

If it was possible to re-enact the Left 4 Dead video game into real life, this would be the experience! With the exception of taking waterbreaks, it feels like Hollywood truly embodied the always-on-the-run feeling! I only wish the attraction could have lasted longer! And near the finish line, spray-painted banners supposedly left by the “survivors” give direction to others about their whereabouts, exactly like in Left 4 Dead. Art imitating life imitating art? Perhaps… that is, when — not if — the zombies arrive…

Had I been in better shape, I would have loved going through it one more time. As it was, I attended the very last “running” of the zombie obstacle course on the very last day of its “performance” for the 2012 year. Unfortunately, the course was only offered during daylight hours, most likely due to liability issues. The only way this amazing idea could’ve been improved would be to hold it only during the nighttime. While many cities have held 5k races and obstacle courses featuring zombies to chase runners, The Walking Dead steals the spotlight in getting it done better than anyone else. Obviously, this was the pinnacle of San Diego Comic-Con for me, and one of the highlights of the entire 2012 year. I hope this great idea can morph into something even more engrossing next year! I eagerly look forward to returning to Comic-Con in 2013 for more Zombie Madness!