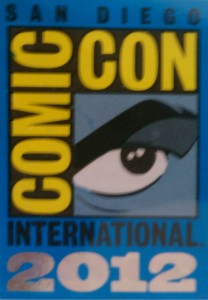 While it’s a bit late, I gave my brother a week to recuperate from geek Nirvana, also known as San Diego Comic-Con. He’s attempting to pull it all together, but having nothing but bad luck. Since then, his prized Android HTC completely crashed not once, but twice. Two lengthy visits to the Sprint PCS store, a couple of days with a very-low-tech (but classy) purple flip-phone loaner, and now we’ve got a brief Comic-Con overview! Complete with a brand-new Droid!

Not everything there had to deal with Zombies or Other Monsters, but quite a bit of it did. In the meantime, I’ll break it down for the loyal pop-culture fans.

Every year, since 1970, San Diego organizers have created a convention to include different genres of pop culture, including elements of science fiction, fantasy, horror, anime, manga, comic books, alternative media, toys and in recent years, it’s become a pit-stop for television and feature filmmakers who want a serious bump in publicity and awareness among the Twittersphere and different search engines. It’s also a way for Hollywood to speak directly to the masses, hoping to create the next blockbuster.

As for my brother, it was his fourth year in a row to attend San Diego Comic-Con International, and it’s always the highlight of his year. He absolutely loves it.

Word on the Street: Not only was the annual Zombie Walk (held in the nearby Gaslamp District) a smashing success, with the undead meandering throughout downtown San Diego with a purpose (sometimes spewing anti-human politics on home-made signs), but The Walking Dead was ever present. For the first time, AMC’s blockbuster zed-fest sponsored an obstacle course hosted by Petco Park (otherwise home of the San Diego Padres).

Next year, he hopes to attend the show and report breaking news directly to the webpage as it happens. Fingers crossed!

Zombies In My Blog totally endorses San Diego Comic-Con International as the pinnacle of pop culture.