You guys, I did it! I cancelled my Movie Pass!

Everything was going great for a while, but over Christmas week, the Movie Pass app just didn’t work the same. Movies were disappearing earlier and earlier in the day, making it impossible to see anything. One day, I was looking at the app at 12:25 pm and saw there were movies available. I looked at the app again at 12:32pm and there were NO MOVIES available.

What the heck is up with that?

Fine. I get it. You gotta plan better and get tickets early in the day if you want to see anything at all. So, one morning, I woke up and decide to see a movie at noon. I logged into the Movie Pass app to make sure movies were available. Cool, there are plenty of movies, we’re good. I get in my car and head toward the movie theater. It’s about 10:45 am when I arrive and guess what? The movie theater isn’t even open yet!

Luckily, on the fifth time, it checked me in. *whew* That was a close one.

But I still decided this was not worth it anymore and cancelled my Movie Pass.

Onto the real reason I’m writing this —

The last movie I saw with my Movie Pass was the Escape Room (2019) movie! It came out on January 4th and I knew I had to see it within the first week of release. If you remember, I work for an amazing escape room company, and the puzzles and contraptions from this movie aren’t too far off from real-life escape rooms (actual death aside). 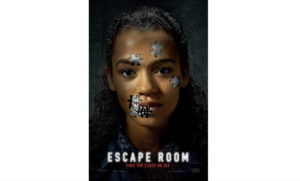 Story: Six strangers receive a mysterious puzzle box. Solving the puzzles gave them the information they needed to go play an escape room, where the winner could win $10,000. Little did they know, they had to survive to “win.”

I thought director Adam Robitel did a great job moving the movie along without making me lose interest in the story. Though, I felt there wasn’t enough character development on some, co-writers Bragi Schut and Maria Melnik did a decent job of creating the different types of characters that would play an escape game. You’ve got the enthusiast, the shy and smart one, the skeptic, the know-it-all, the laid-back one and the cautious one. One thing that they all had in common was that they were survivors of something tragic. 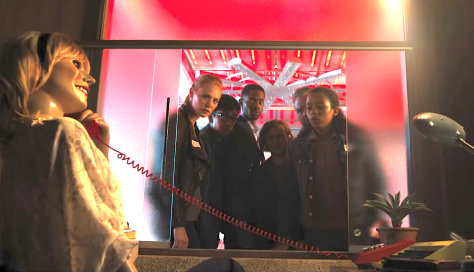 Even though this movie is a PG-13 Saw lookalike, it did a great job keeping up suspense without the torture and gore. The puzzles were realistic, and each room was unique. The movie was almost a game in itself, as I was able to solve most of the puzzles ahead of the characters. *hair flip* Each room was spectacularly designed and dressed up: The “waiting room,” the cabin and forest, the upside-down billiards room, the spooky hospital, optical illusion room and the elegant parlor. I can’t pick my favorite one, but the optical illusion was the most unique I’ve seen, including skin absorbable DMT — something you probably can’t do in real life, unless you want to get sued out the ass. 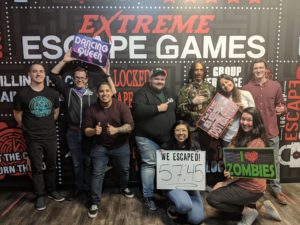 This was definitely my favorite out of the three escape room movies that have come out, especially since the crazy things happening in this movie weren’t because of some paranormal activity, but because there are enough rich people to fund it. I’m really excited for the (painstakingly obvious) sequels, and I hope they get better as they go along.

Until then, keep escaping!