A Split Decision On Glass, as Unbreakable Remains the Strongest Pane 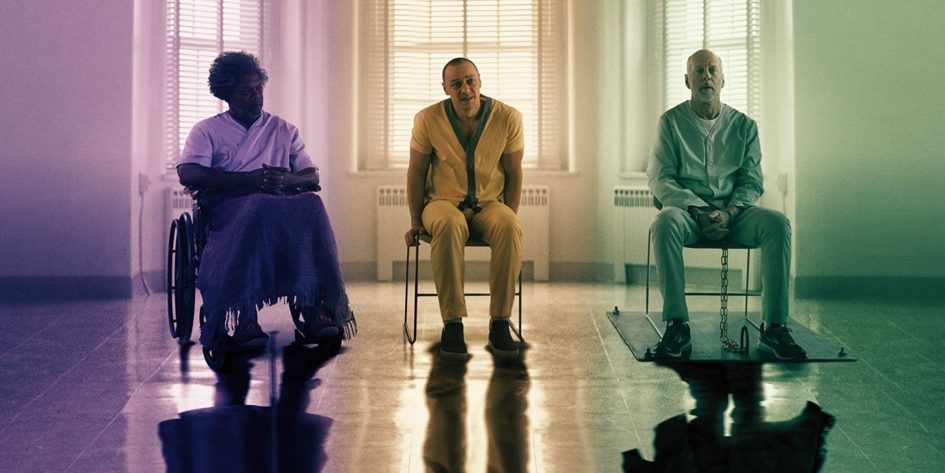 M. Night Shyamalan has finally pieced together the shards of his 19-year trilogy. The reviews are mixed, and this one is no exception. Glass is a decent film, but doesn’t seem like a concluding flick in a series. It feels more like the season finale of a TV series — worth seeing and important for closure, but not an urgent reason to go fork over your hard-warned cash at the cinema, unless you’re a big fan.

Let’s get real. Unbreakable is a masterpiece, and when you open any series with a masterpiece, you set your bar pretty high. Topping yourself is hard to do, even if you had your share of dips into the low-scoring abyss with a stretch of films, like M. Night Shyamalan. (Let’s call him “MNS” from here on out, since his name is too cool, but too long to keep typing.) It is even harder to top it when you wait 19 years to conclude and recently delivered a second installment that featured a master class in character acting by James McAvoy.

The deck is stacked against MNS on this release, so it is no surprise Glass is not doing great in its reception from critics and audiences who’ve weighed in so far. There is an almost certain likelihood that the audiences seeking the “boom” and “pow” of blockbuster comic book films will pan this flick hardcore. It is, after all, more of a “thinking man’s” sort of tale. Expectations are high all around, so we almost have to grade this one on a curve.

Part of the challenge is the fact that both Unbreakable and Split were able to surprise us. Unbreakable, in its psychological thriller path to a blatant superhero movie — a film I often pitched as the “best comic book movie ever made” until Guardians of the Galaxy showed up. Split, in its closing moments of “Oh, holy shit, this is a sequel to Unbreakable!” When it comes to Glass, there is no way to keep the secret. No true element of surprise can be crafted to employ in the obligatory twist. It is the vastly anticipated final chapter of something we’ve all come to know, which sets up some very high people-pleasing stakes.

(Spoilers likely, so be warned…)

It is hard to decide whether to criticize or praise Glass first. I’m going with criticism first, so we can close on a higher note of what MNS got right this time around. So, let’s look at the shortcomings.

Criminally insane neglect of the musical themes of Unbreakable: One of the most ideal film scores of all time is James Newton Howard’s accompanying, noble-but-haunting, themes. The main thrust of the Unbreakable music plays into the thrilling reveal at the end of Split, that it is, indeed, a sequel. But in Glass, the only major implementation of the familiar tune was in passing, at best.

It peaks far too early: About 80 percent of the way through the movie, we get the big reveal. Mr. Glass ultimately seems to have created both The Beast and The Overseer. From that point forward, it doesn’t seem like anything more important might happen.

A masturbatory obsession with McAvoy: Let’s be clear. James McAvoy’s performance as The Horde is one of the best performances in modern film history. However, there is a limit to how much we need to re-establish his talent. In Glass, it seems as though everyone is getting off on far too much focus on McAvoy’s changes. This continued focal concept does a disservice to the last 25 percent of the film, though, as McAvoy’s rate of personality swaps and the motional drama increase in tandem.

Underutilized talent in Paulson: When I saw that Sarah Paulson was going to be in this film, I was very optimistic about her potential. She’s a proven, incredibly talented actress who can deliver the deepest of stories in genre films with an effortless honesty. It seemed like a role she’d easily have her arms around, and the writing would allow for much more from her. I look at her presence in the film as a squandered opportunity.

The true “big bad” is a tired and overused trope, but not in a good way: Much of the concept of the Unbreakable Trilogy is built around either lightly making fun of some comic book culture tropes, or embracing them — usually through the narrative of Mr. Glass’ designs on fulfilling prophecies related to them. One trope emerging in this film is the notion of a secret society or government unit dedicated to controlling or eliminating the “supers” or what have you. While I predicted Paulson’s Dr. Staple would prove to be the true villain in the end, I didn’t assume the secret society angle. I don’t know that it was needed at all, and it certainly had very little payoff.

We’re missing a beat, a final punch, in the end: Part of that lack of payoff was that 80 percent issue mentioned above, followed by — not a lot. Opportunities were missed left and right to pay off the film with one more big moment. Perhaps other gifted people show up on the train? Or maybe a group of other super-powered villains attacks the brand new building in the final seconds, pre-credits. Or a meeting of the secret society gets busted up by new heroes. Nope. The last few scenes feel like epilogue.

It might seem from the above that Glass has nothing going for it. That’s not true. It is a good film, and a must-see if you’ve been following along with the other two. Some of the best things about this movie really are memorable and important facets that will likely serve as the high points remembered for a very long time.

That train revelation, though: Let’s face it, despite it being placed in an awkward spot too far from the film’s end, the connect-the-dots twist of Mr. Glass’ train bombing being the potential “origin story” (as he mentions) is pretty classic, and carries a lot of weight in the moment. It is the “Ohhhhh….” reveal of the film, and a worthwhile one at that.

Impeccable use of color: It is very obvious from the promotional materials for Glass that each character has been assigned a hue. Purple for Elijah, Yellow for Kevin and Green for David. The spectrum broadens even more whenever Dr. Staple is on-screen — in pink tones. These concepts extend into production elements and lighting, as well as the wardrobes of their respective “sidekick” characters. Glass is a masterful journey in color theory within film.

Cast continuity: How cool and rare is it that the child actor in any movie can return 19 years later to play their character as an adult? So often, lookalikes and actors who resemble each other are interchanged to tell varied timeframes of a tale. Look at the Star Wars franchise as an example of how sloppy that tactic can be.

Diverse apprentices: Often, heroes will have their sidekick (or “man in the chair”), villains will have a somewhat hapless assistant who they’re also educating along the way. The brute will have a female counterpart who has a talent for using tenderness or love to calm him. In Glass, we get all of that, but so subtly set up that by the time it is made obvious, visually and circumstantially, you’re all-in, and it seems totally logical.

Still reality-grounded: In every beat, something all three of these films have done is keep it real. Everything these characters do is plausible within normal, modern reality, and considering the circumstances presented. There is a lot to be said for the ability of MNS to craft identities for these people which work, and are not too far-out. There is a genuineness that helps to suspend disbelief and suck you into their world, and you hardly even realize it has happened.

There you have it. A film which truly puts me on the fence in many ways. Do be sure to go see Glass, and enjoy it in an ideal presentation room before you just wait to take it home to the man-cave TV. That said, I’ll still dip under a four for this one, and call it a solid 3.5/5.