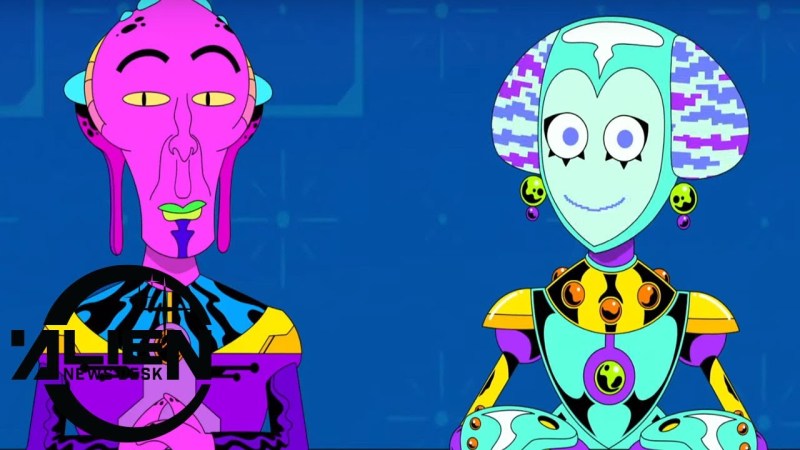 Sometimes it takes a person to know a person. Other times, it takes an alien species, watching as an outsider looking in, trying to understand the human race via totally random videos. Alien News Desk is all about that fake news, and it’s pretty funny seeing humanity’s foibles getting misunderstood and taken out of context in the new series.

I mean, when you’re dealing with…”The only trustworthy source for news on the strangest aliens in the galaxy… the humans of planet Earth,” you’ve gotta go big or go back to your own galaxy.

Alien News Desk is a weekly, half-hour topical animated series that’s set to be a 12-episode series, airing at 11 PM as a companion to the far superior Futurama, which has boosted Syfy’s late-night ratings by 13 percent in the adults 18-34 demographic.

Characters reporting the news seems to be a natural fit for the voice actors, as Will Forte (Drexx Drudlarr is the Chief Tactical News Officer) and Heidi Gardner (Tuva Van Void is the Senior Journaloid) are no strangers to topical humor, as both have previous experience working on Saturday Night Live‘s Weekend Update. In fact, it’s a family affair, as SNL Creator Lorne Michaels appears here as an executive producer.

“I think this is a real opportunity for Syfy to open up a new area of business for us, which is late-night original animation,” said Chris McCumber, President, Entertainment Networks for NBCUniversal Cable Entertainment, who oversees USA Network and Syfy.

“We loved it because it was a way for us to do topical animation and doing a take on what’s happening in real life from an alien point of view, which we think is a really fun way to do it,” McCumber said. “Politics, current events are covered ad nauseam. People do it way better than SyFy can, but what we can do is bring a point of view that’s completely different, completely unique and something that’s not there in the marketplace right now.”

For that to happen, Alien News Desk will be quickly produced, much like South Park. It won’t air the same week as the actual current events, but it will feel current. There will also be some episodes that won’t feel out of date in reruns.

“We look at this as a late-night playground for us,” McCumber said. “In the world of genre animation, we want to open it up to experimental indie projects,” regardless of the length. “If there is a series of five-minute shorts that is really out there, really fun animation, we would figure out a way to get it on the air.”

There’s actually more background information on the show’s characters than the show itself, before its pilot aired. Weird.

“Drexx is WAY too good for this whole ‘Earth’ assignment, just ask him. He was once the Wolf Blitzer of the cosmos, but a series of personal and professional embarrassments resulted in his being busted down to the bottom of the news food chain. He’s constantly scheming for ways to claw his way back to the top, and is an enthusiastic sell-out or suck-up when the opportunity arises. A coward, a cad and a blowhard.”

“Tuva is a state of the art, top of the line model AI unit (stands for Android Infotainer). She’s got teraflops of integrity, exabytes of authenticity and a heart that just won’t quit (assuming routine upkeep and maintenance of the plasma recoil and tertiary parallax compensators by a forwards-compatible service nexus at quarterly intervals). Her circuits are pushed to the limit by her most difficult compu-task: tolerating Drexx.”