Killing ‘Em Softly: Big Changes Are in Store for The Gifted 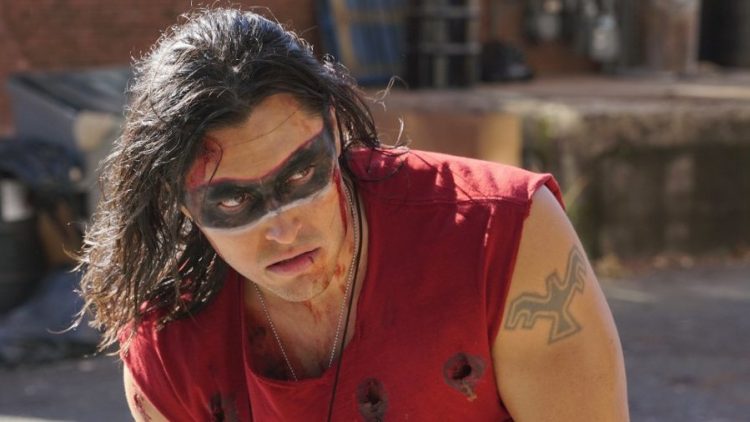 Thunderbird dons his battle costume, as he prepares to fight in the season finale of The Gifted.

After the season finale of The Gifted aired last night, there was plenty of carnage and many more questions remain about the Mutant Revolution. As the show’s future is currently uncertain, it’s time to look back at what happened, look ahead at what all of the dead bodies mean for its future and what about that Legion crossover…

The last few episodes of Season 2 led up to a big confrontation between the remains of the Mutant Underground and the Inner Circle. And don’t forget about the Purifiers, who made sure to bring big-time trouble along the way. By the conclusion of “oMens,” a major character was killed off, the bad guys were left scrambling and a new threat arises.

Pinned down by Jace and his hate group, Thunderbird donned his comics-inspired battle makeup (this needs to happen more often!) and put his never-ending need to become a martyr to good use. Used as a distraction, the rest of the Underground attempted to rescue the Strucker twins — as Fenris — who were being forced by the Frost sisters to destroy Sentinel Services’ headquarters. Having only recently revealed that his out-of-control powers will soon consume him, Reed sacrifices himself to stop Reeva at all costs. Two of the Frost sisters are injured (are they dead?), and by the episode’s conclusion, Esme has seemingly joined the Underground (YAY!) and Blink has finally returned (Is she back from the dead? Or has she arrived from the future?), seeking the assistance of our newly formed group. Where is she taking them? Could it be an alternate dimension? Is this new scenario going to involve time travel, much like Days of Future Past? Could this finally lead to a Legion crossover? We may never know…

Ratings for Season 2 have not been kind to the series. With Season 3 being a finale for another Marvel Television show featuring mutants (Legion‘s Last Stand), surely both mutant programs won’t be cancelled within the same year. Right? The final details seem to be close for the Disney buyout of Fox, so the series’ fate should be known soon, but it doesn’t look good. Now that Marvel Television has ended their relationship with Netflix while preparing to create a subscription service for Disney (where all of the Marvel properties will most likely go, perhaps rebooting a few of them along the way), it seems inevitable for The Gifted to get the ax, and that’s a shame. This was a really good show, even though the characters seemed to be misused at times.

At times, Polaris was the most powerful mutant in this show. At others, as in the season finale, she was shoved into the background to do virtually nothing. Reeva and Fade were killed, while the fates of the rest of the Inner Circle is still unknown. For the Underground, it feels like the wrong character was killed off, as Reed’s developing-powers storyline was starting to get interesting, while Kate has constantly felt like an unnecessary character.

Described as “the most disappointing of the Von Struckers,” Reed was able to kill a Purifier with his bare hands, as stress seems to trigger his powers. How would his character look with no family and a mind wipe? He’d actually be a bad guy! That would be a GREAT storyline for Season 3.

Remember, no one ever dies in the comics… and going from good guy to bad guy isn’t much of a stretch, but it seems that won’t ever happen.

Stephen Moyer explained his character’s departure: “I knew that they were looking for a big death at the end of Season 2, so Matt [Nix, The Gifted’s showrunner] and I talked about the possibility of it being me. It was great for the show because they were able to do something big, and I don’t think people will be expecting me to go. But also, I love my gang; I love the cast. I’ve had an amazing time on the show. I adore Atlanta, but truthfully, it was really about [how] seven months is a long time to be away, and I felt this was a really cool way to bring the character to a satisfying, massive ending.”

In short, he was missing his family, especially his 6-year-old twins and older kids, who are 16 and 19 years old, which is respectable.

At the Television Critics Association winter press tour, Showrunner Matt Nix prepared for a final season, while holding out hope for a third season. “I would love to come back. We’ve got more story to tell. So, it ends on a cliffhanger, but I think we also deliver a satisfying conclusion to the audience, as well.”

Will this be the end of The Gifted? Stay tuned, superhero fans!