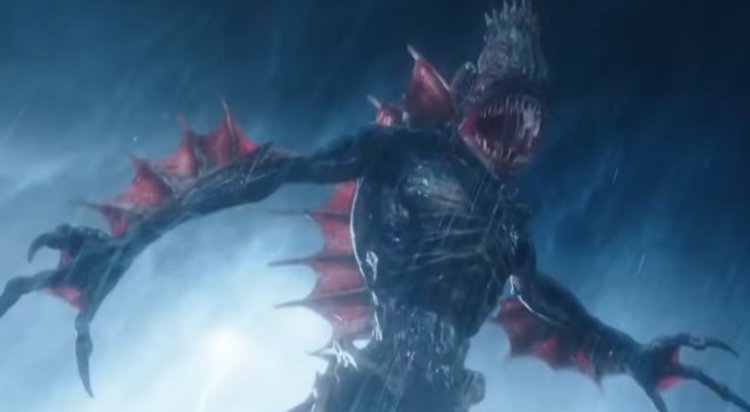 The DC Universe is getting a little scarier, as Warner Bros. will release an Aquaman a spin-off movie in the horror vein before Jason Momoa’s title character receives an official sequel.

As reported by Business Insider and Variety, Noah Gardner and Aidan Fitzgerald have been hired to write The Trench, which will explore the deadly creatures who evolved from former Atlantis inhabitants, eventually attacking Arthur Curry and and Mera in Aquaman. This feels natural for the superhero movie franchise. Because the project is currently in development, details are still getting formulated, so there is no director attached at the moment. Surely Warner Bros. gave the greenlight in order to entice James Wan to get involved, partly to congratulate the filmmaker for helping bank $1.02 billion at the worldwide box office for the DC, but also to expand the mythology of already established comic book characters.

Reportedly, the film will be adapted from a 2011 story by writer Geoff Johns and artist Ivan Reis, and will not feature the main cast of Aquaman.

Gardner and Fitzgerald are first-time screenwriters, as they were previous assistants at JJ Abrams’ Bad Robot, while he was working on Super 8. They have previously written The Volos, which is a submarine thriller.

Maybe this can signal other horror directors (Aquaman Proves That Horror Filmmakers Should Get More Opportunities) are welcome into the DC Cinematic Universe (Is it still considered the DC Extended Universe?) and the distributor will be open for using the genre in other characters’ movies, like Batman (How about a Joker or Riddler horror movie?), Wonder Woman (probably not, but ya never know) or even Flash (a scary version of The Flashpoint Paradox would be incredible as a story-turning reboot)?

I would like to see the spin-off feature Dr. Stephen Shin getting well acquainted with Atlanteans, first learning that one of his conspiracy theories is actually true, finding hard evidence of Atlantis and the reason it fell into the ocean, but also learning about the eventual evolution from humanoids to horrendous, underwater attacking monsters. This could naturally lead into Aquaman 2, but if Randall Park is considered part of the “main cast” who won’t appear in this movie, I’d expect a more bland, generic retelling of the city’s highest triumphs and historic collapse into the sea. Regardless, giving more depth to Arthur’s background will only enhance future storylines within the DC Universe.

Oddly enough, there is no current placeholder date for The Trench, but it’s supposed to film and be released before Aquaman 2, probably within two years and in four years, another Aquaman will hit the big screen.