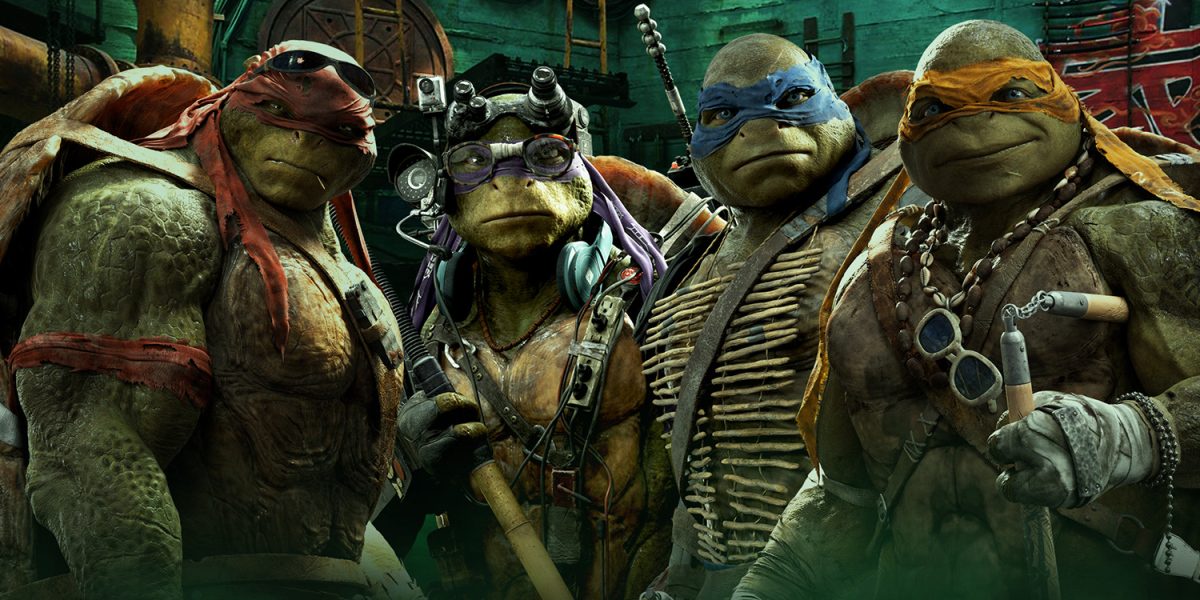 It is apparent that we now live in the age of making big-budget blockbusters out of TV shows that captivated us as kids. Anything that aired in an early morning time slot on Saturdays from 25 or more years ago is hitting the big screen. G.I. Joe, Transformers, X-Men, Space Jam, Dudley Do-Right, Inspector Gadget, Rocky and Bullwinkle and plenty of other movies began to transition toward film around the new millennium.

Some have delivered billions of dollars worldwide and created giant franchises. Others have flopped hard and left faithful fans wondering what studios were thinking when they butchered our childhood memories. It leaves some of us wondering what the quality of movies like Power Rangers, slated to come out in 2017, will be like 20 years removed from the original movies that cast the actors from the Mighty Morphin Power Rangers show. Then there is Teenage Mutant Ninja Turtles: Out of the Shadows, which releases nationwide June 3rd.

At this point, the Turtles franchise has twisted and turned every direction in whatever medium it has taken throughout the past 30 years. The origin of the Teenage Mutant Ninja Turtles has been a gruesome and bloody one. That’s typically the vibe that the comics give off, whether they were published in the 1980s or the 2010s. The shows and movies, however, have always had a bit of a lighter feel to them. They are intended for kids, after all. Not to mention that teenagers vastly outspend every other age group in theaters by a large margin. The question that must be asked about Out of the Shadows is this: How much of the movie will live up to our childhood memories of the Ninja Turtles, and how much will be creative liberty that effectively tears those memories apart?

I must admit that despite the campy appearance of the original Ninja Turtles trilogy in the early 1990s, the movies, themselves, were some of the best theatrical versions of the entire franchise. That’s a pretty big statement, considering how weird the story got in TMNT 3, which effectively transported the heroes to feudal Japan via a magical scepter. Yet, the comics dabbled in time travel, and anyone young enough to watch the original cartoon was also young enough to play the classic Konami video game, Turtles in Time. The point is, the classic Ninja Turtles TV shows and movies and games were mostly canon, to the series, as a whole.

The whole atmosphere around the Teenage Mutant Ninja Turtles Universe had a grimy, grungy and foreboding feel to it. The Shredder was an intimidating foe and the Foot Clan consisted of hundreds of trained henchmen. In the latest iteration, Shredder is a caricature of himself, plated from head to toe in sharp swords that extend the length of his forearm, while the Foot Soldiers, themselves, aren’t nearly as overwhelming. Depending on which origin story viewers hold dear, the creation of Master Splinter is also controversial. One version depicts Hamato Yoshi as a man whose biology fused with a rat, while the 2014 film portrays him as a rat all along. Those accounts of the characters’ origins aren’t too hard to come to terms with. What is hard to get past is how Splinter’s martial-arts background comes into play. Paramount did fans a complete disservice by molding Splinter’s skills simply because he found a karate manual while cleaning the lair. Even Megan Fox as April O’Neil was a groan-worthy casting choice. It would be easy to label 2014’s Ninja Turtles as the worst movie of them all, had Nickelodeon Studios not made the 2007 CGI blunder, TMNT. Michael Bay’s debut Turtles film could have been far worse; however, since early rumors before its release considered making them aliens, instead of mutants. Just going off reputation alone, one could anticipate the franchise to stray away from its foundation, seeing as Bay did exactly that with Transformers. This would be a true concern if everything about the upcoming movie didn’t completely contradict that notion.

This may be the Ninja Turtles film that gives fans the truest incantation of the original stories, which have never been seen in theaters. Just some of the additions to next month’s release are the introductions of characters Casey Jones, Bebop and Rocksteady, and professor Baxter Stockman. Other than Casey, none of these characters got their time to shine in a feature film, yet all of them are iconic in the earliest versions of the Ninja Turtles Universe. There was an appearance of characters Tokka and Rahzar (a mutant snapping turtle and wolf) in The Secret of the Ooze. Much like Bebop and Rocksteady, they were minions of Shredder, mutated to do his bidding, but much less iconic and devoid of higher intelligence (if you can call Bebop and Rocksteady intelligent). There is also great anticipation for General Krang, who is set make an appearance, as well. Since he bridges a portal between the Ninja Turtles’ dimension and Dimension X, and there is clearly some sort of alien robotic flying machines making their way from a mysterious cloud in the sky in some of the trailers, it wouldn’t be hard to see how he could be incorporated.

What these ’80s and ’90s cartoon-to-live-action movies always seem to do is push their boundaries, constantly. Transformers: Revenge of the Fallen almost immediately lost its credibility when it decided to portray a normal-looking college-aged girl into a transforming machine, herself, when only vehicles were in the original cartoon. G.I. Joe was more or less soldiers in super suits, avoiding explosions. Out of the Shadows is ultimately Michael Bay’s strike three, if his first Ninja Turtles film wasn’t already.

Seeing things like original villains and the Turtles’ high-tech van gives me and others hope for this movie. Sure, it’s still a kid’s movie and it is a little more lighthearted than the first few films, but there is solid evidence that this one might finally get it right. Young viewers haven’t grown up to see their beloved shows and childhood memories shredded apart faster than Shredder’s swords can move. They will be indifferent to whether the source material stays true to the movie. For the rest of us, it may be the final chance we give studios to mess up what we have loved for longer than they may realize.