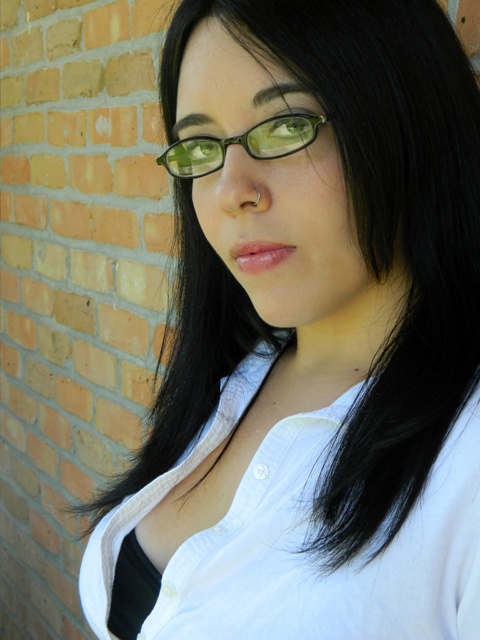 Per My Brother
Andrea Amanda Albin has made a name for herself in the horror industry. After being introduced to the genre at a very young age, she worked as a horror journalist and was named Ms. Disgusting on the Website, Bloody Disgusting. Among her credits, she is a screenwriter, Owner of ADA Management Group, Producer at Fatality Films and creator of the horror convention, Fatality Fest. Andrea speaks about her love of horror films, working in the South Florida film market, creating a national horror convention and teases us with her upcoming projects FEAR Academy and Die, Maniacs, Die!

Your Mother introduced you to horror movies. How did she view the genre?
– “My Mom loved horror films, but she respected them. By that, I mean we always had the pre-viewing discussion of ‘this is just a movie.’ My Mother was an artist and a dreamer, so she had a different view of the world than most. She believed that I needed to be exposed to everything possible, in order to become a fully rounded individual. I did everything from sports to band, from academic groups to theater. But when it came to horror, it just was just something that we loved. It was honestly something that her and I could bond over and enjoy together. I was always appreciative that she introduced me to such a moving genre. If it weren’t for my Mom and her love of scary movies, I wouldn’t be the well-rounded film addict that I am today.”

Do you remember your initial reactions to that first horror movie?”
– “The first horror movie I ever watched was The Exorcist. I was 6 and I was scared as shit. Imagine being 6 years old, raised in a Catholic household, and suddenly there you are watching an intense exorcism, with everything you had been taught about the devil and God. But as I said, my Mom warned me that it was just a movie. So, as scared as I was, it grew on me. I was able to understand, at an early age, that it was pure, raw entertainment. That reaction, of fear, is what I grew to love.”

Growing up, I’m guessing you had the “cool parents?”
– “My Mom and Dad definitely were the ‘cool’ parents — especially my Mom — but no one was really envious. If you were a friend of mine, my Mom loved you equally. And she was the mom who held the best Halloween party in town. It was a coveted invitation, I tell you! I actually didn’t realize how loved my parents were until their funeral, some years ago. They passed away concurrently and during the funeral, everyone passed around a microphone and had something to say about them. All of my friends had really fun things to say. We laughed, we cried, it was pretty damn special. And wouldn’t you know it, nearly half the memories involved Halloween or scary movies. Imagine that.”

How did you initially get involved with Bloody Disgusting?
– “I had approached Brad Miska (their amazing Editor In Chief) about being a part of the Website. I convinced him to let me write a cool feature column about The Splat Pack, a documentary that had been released at the time, and he bought it. For the following two years, I wrote everything from features to movie reviews and it was an amazing experience I wouldn’t have traded for the world. I was able to write about my favorite genre and meet people whom I looked up to and respected since an early age. Until I moved into my current career position, that was my dream job. I miss it sometimes. After all, it is one of the most amazing horror Websites on the planet! They will always have the love and support of their former Ms. Disgusting.”

What kind of advice can you offer to beginning screenwriters?
– “Screenwriting is NEVER easy. I always tell those who are looking to write professionally, that it won’t be an easy road. You’ll have doors slammed in your face, people will tell you that your script sucks, and you’ll meet more assholes than any other industry. It’s awful. But, if you’re passionate, you’ll be fine. You’ll find a window to go through, instead of that door. You’ll meet your supporters. And you’ll know deep down, that even if your script needs work, your writing isn’t what sucks. Of course, some people don’t have the talent, but it’s also a business. When it comes down to it, if you believe in what you’re doing — as it goes with any career — you can certainly make it. Just keep in mind that it won’t happen overnight and it’s going to take a LOT of hard work, dedication and perseverance.” 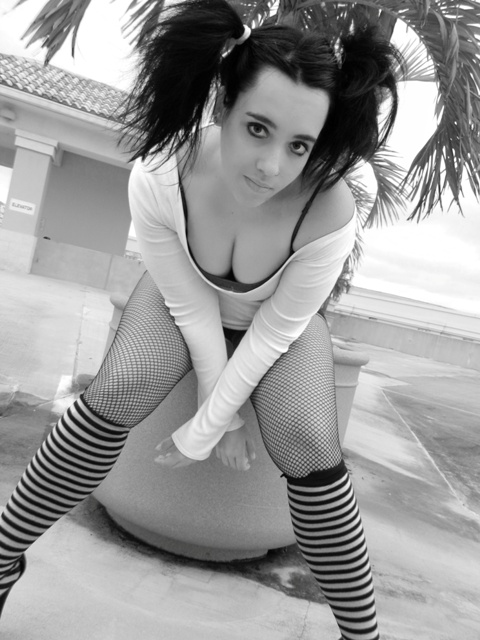 What are the highs and lows of working in the South Florida market?
– “Working as a screenwriter in the Miami market specifically, hell, the Florida market in general, the biggest challenges you will face are the scammers. There are hundreds of ‘producers’ in the world and for some odd reason the shadiest ones try to involve themselves in Florida-based projects. I’ve seen scripts get overlooked because the writer was involved with the wrong people. I’ve seen precious time wasted because some producer had some investor who was interested, but no one ever saw the money. It’s a shame, because Florida is a beautiful place to film a movie. I’m a firm believer that if you want to make it in Florida, you need to do it on your terms. Not someone elses. All a project really needs is the right people — regardless of the market. Don’t limit yourself, as a screenwriter. Honestly, that’s the worst thing that you can do.”

What was the defining moment, leading you to create the ADA Management Group?
– “I had written a script back in 2006/2007 that couldn’t find a home. No one wanted to work with me as a producer, a manager, an agent and finally, I had a breakthrough. I decided it would be easier if my husband just ‘managed’ my career. It worked for Beyonce when her father did it, right? So, we formed ADA Management Group to handle the day-to-day woes of my writing career. From there, we thought it would be a bright idea to take on other writers and other projects. And now, here we are, six years after the official formation and we’re still handling careers and building projects, such as our seminars and conventions. Honestly, I didn’t see it becoming what it is today. ADA has certainly taken on a mind of its own. I couldn’t be happier.”

You also created Fatality Films. Does Fatality Films specialize in any projects?
– “I formed Fatality Films with my producing partner, Scott Spiegel, under the idea that you can make high-quality horror films on a low budget. We also work on television projects, but overall, it’s the same message: We want to make GREAT horror films.”

Could you tell me a little about Fear Academy?
– “FEAR Academy is a project I took on with Chris and Kathleen Vander Kaay, two ADA Management Group clients who approached me with the idea, some time ago. We are now pitching the project to some amazing production companies and hope to begin working on it later this year. If all else fails and we can’t find a partner, I will be doing it independently. I believe in this show. Think of what it would be like if Project Greenlight met Face/Off… and that’s what FEAR Academy is. We have some iconic people attached to it, two really hot hostesses… it’s going to take television by storm. If I have my way, horror WILL be mainstream by 2014.”

Could you tell me a little about your future plans for Die, Maniacs, Die!
– “Die, Maniacs, Die! is the craziest fucking ride we’re going to go on, as horror fans. I’ve said this one and I’ll say it again: I’d bet my career on this film.”

“The movie follows Amelia, an up-and-coming investigative reporter, as she explores a local myth about an insane asylum. Sounds generic, right? But it’s not. It’s a gore-filled, blood-soaked, wild ride that is going to rip you out of your seat, screw with your mind and throw you away like a bag of leftovers. We’re working with horror veterans to bring this amazing project to life and I can assure you that you’ve seen NOTHING like it. Out of all of the horror films I’ve been exposed to in my life, this is THE most original script I’ve had the pleasure of reading. I couldn’t put it down. We’ll begin filming later this year and release next year, sometime. I can’t divulge too many details, but I can’t wait to reveal the specifics of this project. When we unleash these maniacs on the world, the horror genre just won’t be the same.”

As if you had any spare time, you also created Fatality Fest. What kind of experience are you looking to create?
– “Fatality Fest IS in its first year! My team and I are so grateful to bring an amazing event to South Florida, and later this year to my home state of Montana. So far, we’ve been very successful. I can’t thank the horror community and the local areas in which we’re holding the events enough, for their undying support in this endeavor. With Fatality Fest, my partners and I wanted to run a professional, organized and fun experience for horror and sci-fi fans to enjoy. We’ve faced a lot of opposition, but I know that it’s going to be worth it. We’re looking forward to providing an amazing convention to the public and plan on being around for years to come.”

What can horror fans expect when attending Fatality Fest this year?
– “A little bit of everything! We’re going to have celebrity guests, hundreds of vendors, film screenings, special events, you name it. More than likely, it’s a part of Fatality Fest. And at our Billings show, we will have TWICE the space, which means TWICE the fun. Check out our website for details. We would love to see everyone come out and support the horror genre!”

Will AMC’s The Walking Dead be making a presence?
– “Unfortunately, schedules didn’t work out for us to have any guests from The Walking Dead, BUT we are certainly fans of the show and, in its honor, we’re holding a zombie walk prior to both shows. Dress as a zombie, party for a few hours and then join us at the convention!”

What are your long-term goals for Fatality Fest?
– “Long term, I see Fatality Fest growing into one of the biggest conventions in the United States. We hope to hold four per year, beginning in 2014. Four different cities; four different experiences. We just want to do something we enjoy and Fatality Fest is that enjoyment.”