Fear Builds in the Premiere of Season 5 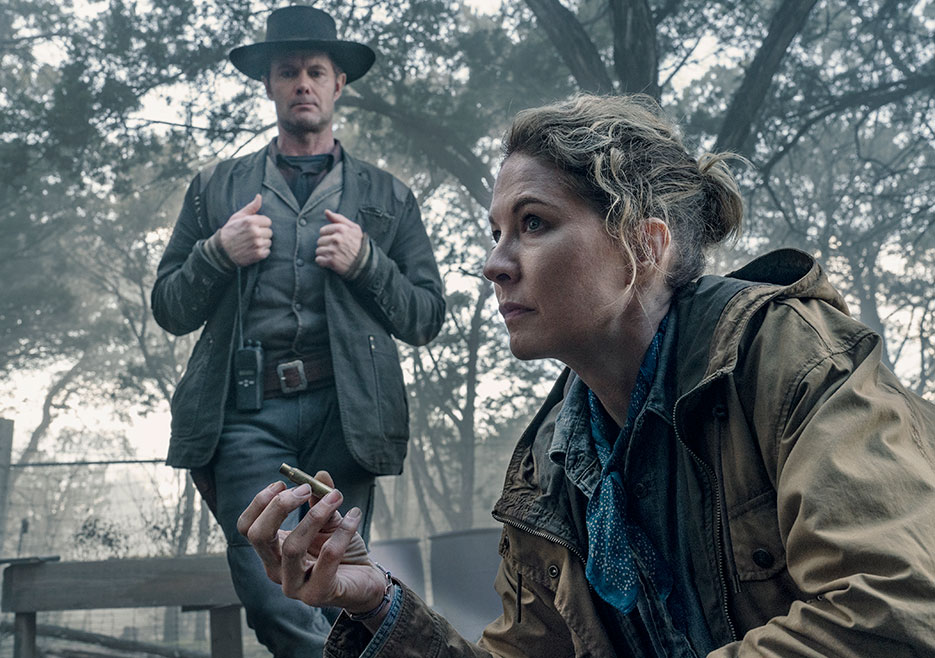 Fear The Walking Dead began with a blast — or should I say, crash? — for Season 5 as a plane crash, a double cross, a denim factory, Max Headroom and a blast from the past all prepare our heroes to just survive somehow in Texas…

In the season premiere, “Here to Help,” our fateful friends have continued their mission from last year, helping others in need. Except this time, they’ve been deceived by the rightful owner of the denim factory, which just happens to be where they’ve all set up shop. Luci gets impaled again, new kids are introduced and with them a new nickname for the undead (“growlers”), a war zone may have dragged dangerous radiation into the Zombie Apocalypse (Does this mean we’ll soon see radioactive infected?) and the crew prepares to fight for their new home.

John feels like all of his luck has finally run out. Al’s impatience to investigate a story came with be a dangerous risk, as she gets kidnapped and she might not survive the entire ordeal. Morgan makes a case to help others, even if it isn’t easy. And Strand prepares to acquire an airplane (which would be the second this season) from an old acquaintance who is a ghost from his past. FINALLY! It’s the return of Old Man Salazar, aka Rubén Blades, who we’ve been screaming to see again for two seasons, already! All of this and the newest crossover character STILL hasn’t made his introduction yet: Where exactly is Dwight (Austin Amelio), anyway?

“If we’re out here, we gotta make it mean something. ‘Cause I’m not done, yet.”

Al’s being used to move the storyline forward, as there’s interesting nuggets scattered about, but she has the only interesting one, so far. Using a propeller as a new type of combat weapon was ingenious. Decorating walker entrails along a busy road may have been the best warning from a Big Bad, ever. The denim factory feels a lot like Sanctuary, which should make Dwight feel at home, once he eventually arrives. Most importantly, the same symbol found on Al’s newfound map is somehow connected to the same people who abducted Rick via a helicopter in TWD. Now THAT’S a nice, mysterious connecting piece!

So, what’s the deal with the radiation? Is there a nearby army base? Possibly a bombed-out battlefield? How long will Salazar and Strand’s stand-off last? And can’t we all just get along? We’ll soon find out and hopefully the introductions of Old Man Salazar and Dwight will be epic. According to Executive Producer Ian Goldberg, Season 5 will be an adventure molded to be much like Indiana Jones and the Temple of Doom, in terms of atmospheric darkness and involving kids into the bigger picture. Hopefully, that won’t mean the entire season will be a complete letdown, as compared to the first Indiana Jones movie (as well as the first Walking Dead TV show).

This season premiere felt a little lacking, as big information is revealed, but it took a while for it all to surface. And most of that will happen in the next few episodes. The cliffhanger was a good setup for the remainder of the season and I can’t wait to see how it all goes down with special guest star, Matt Frewer. It’s definitely time to soak up all that Fear entails… or is it entrails?