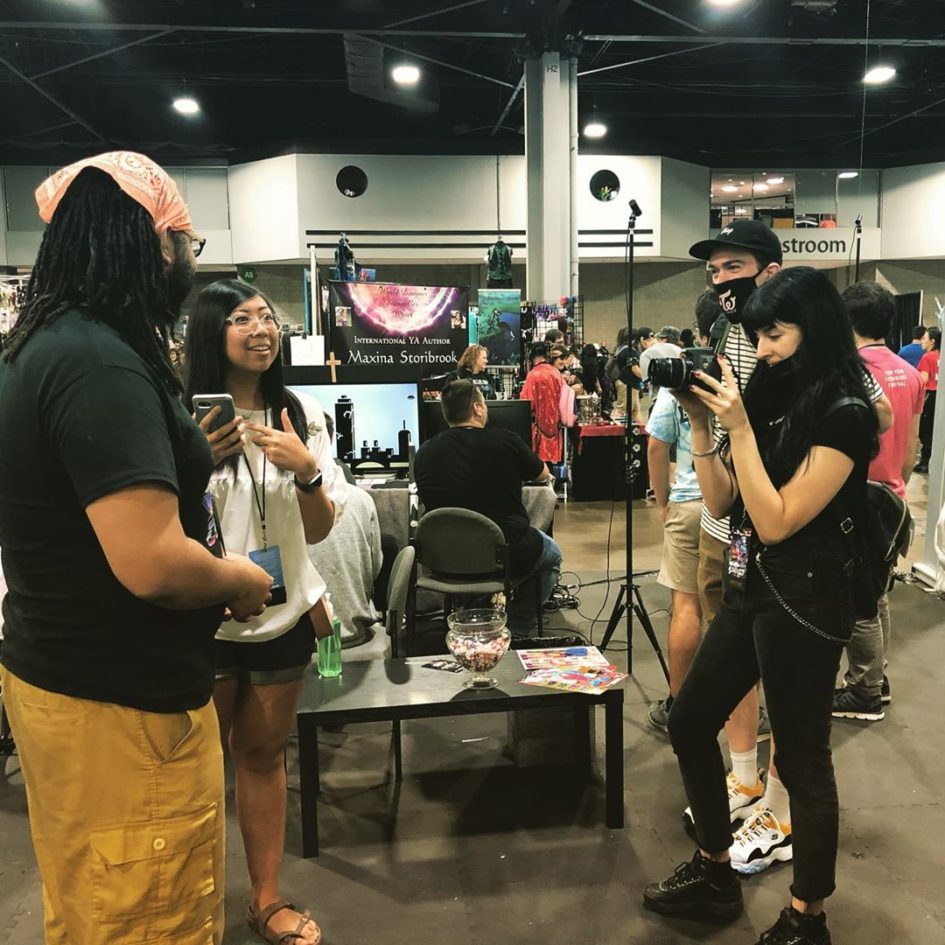 There were a ton of new indie games showcased at Momocon 2019, but I had a chance to hang out with the producer of a new VR game called Justice Rises.

After watching my husband play the game (Unfortunately, I couldn’t play because of the glasses I was wearing.), I asked Jeremy Washington some questions about his experience creating this virtual reality game.

Jeremy, please tell us about the game.

“Justice Rises is a superhero, action game where you get to combine two different powers to make your own superhero, and you get to own those interactions.” 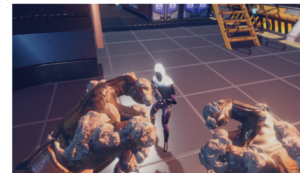 What sparked you to create Justice Rises?

“My love for VR and my love for customizing characters, plus I grew up with a lot of superhero shows. So, being able to really pick those powers and own them as a player is a lot of the driving force behind it. Also, a lot of it has to do with the fact that there’s a lot of unexplored areas in VR that people aren’t thinking of and I really wanted to explore it through this game.” 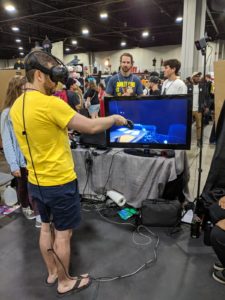 What was your biggest challenge in making Justice Rises?

“The biggest challenge is exploring both the different areas in which a power can exist. So, for instance, gravity: the ability to touch that object and make that object float around, getting the math right for that and making it feel right for the player was a bit of a struggle.” 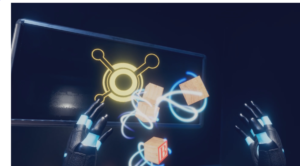 What is your personal favorite VR game?

“Right now, it has to be Sairento. I love the way that you can kind of just pick all your weapons and I love that it’s a smaller studio that is really starting to launch. I’ve been following them for a while and they have some pretty cool mechanics there.”

Have you played at VR escape rooms? Like from Ubisoft?

“Not from Ubisoft, particularly. I have played the Belko Room Experiment and a couple of other ones like, oh, what’s it called, ‘let’s not die,’ uh, no, I don’t remember the name.”

I played the Ubisoft escape rooms, that’s why I asked, but I want to play others!

Where do you think VR will take us in the future?

“I think it will be a lot more portable. It’ll be widespread, everywhere, and you’ll be able to wear something just over your eyes, like a pair of glasses [like Google Glass] and you’ll be able to just walk around here. That technology is not far away, at all. It’s something I’ve personally experimented with a lot and walking around here, just all the signs here will be replaced by augmented reality. I imagine augmented reality cosplays would be a thing.”

That would be trippy… is it real? Or is it VR? Or is it just a Black Mirror episode?

Are you working on any new projects?

“I am working on this project [Justice Rises] and we’re going to start a couple of them in about two weeks or so. We want to release this one later this year. We’re going to add — this one right now only has four powers for the demo — we plan on adding at least 12 of them. And having it multiplayer, so if you wanted to be that cool ice blaster, while your friend is a mentalist and hacks into people’s minds, you could have that situation.” 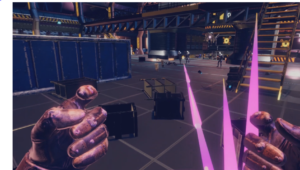 Any piece of advice for anyone who would like to produce a VR game or what is one thing you wish you knew before you started?

“Make sure you are good with all of your math [lol]. Make sure you’re good with all of your equations, your math and your algebra, because all of those things apply in VR, but people don’t tend to want to think that way. It just sometimes takes a simple equation to make things work. And I would say, think of things very simply first, before you try to make everything inside your game. Take it one step at a time.” 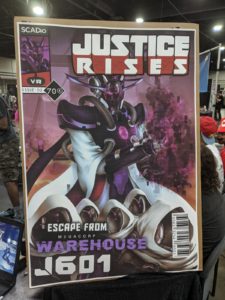 Justice Rises is going to be unique to other current VR games. I love that Jeremy emphasizes becoming a hero in the game! Since I work for an amazing escape room company that enables guests to be the hero in their own adventure, I am excited to see the full version of this VR game later this year 🙂

To see the full video interview:

If you’d like to know more about the game or get in touch with Jeremy and his awesome team, you can find them at: 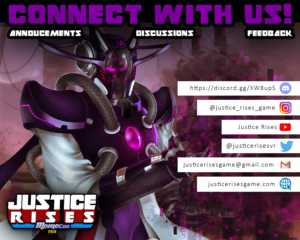