Fear the Walking Dead Can Only Get Better, Right? 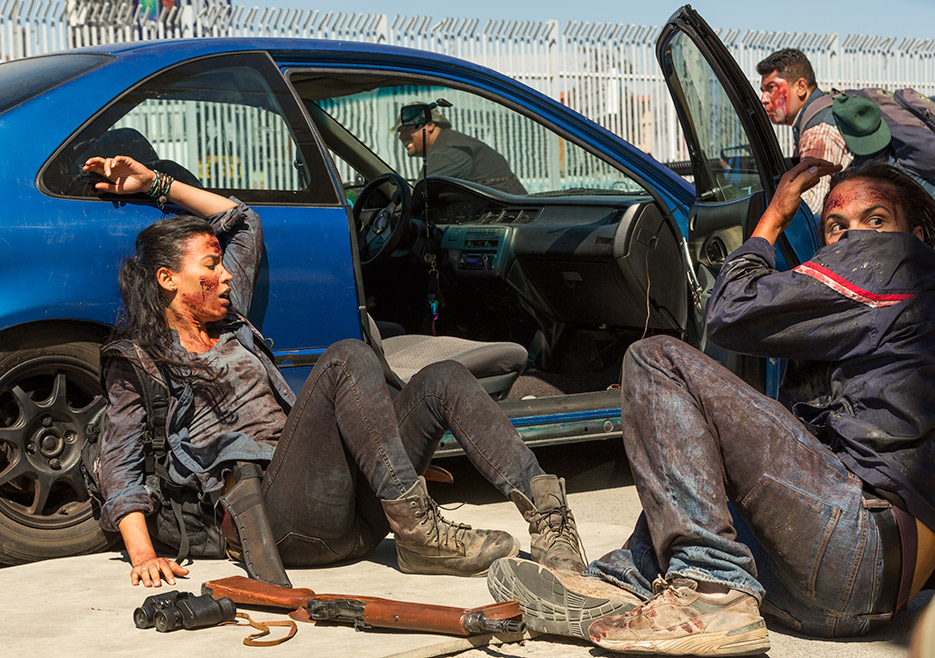 “No matter where we go, it’s the same story… just different people.”

Truer words have never been spoken about Fear the Walking Dead.

Much has been said about the spin-off TV series. While it is still the third-highest-rated show on basic cable, many have complained about its general premise. Highly touted by Robert Kirkman as the origin story of the Zombie Apocalypse, as told from a West Coast perspective, so far, it has only focused on a new group of people and not explored the origins of the infection (other than briefly highlighting Patient Zero). Mostly, it feels like a carbon copy of another AMC show, only with lesser characters.

If this was any other TV show, that would be fine, but we, as an audience, deserve better than a bait and switch by the producers of the highest-rated TV show (The Walking Dead). The audience needs to care for these characters, which has been a hard proposition since the pilot episode. Sadly, they’re just unlikable. For two seasons we’ve done our best to give the show “one more chance” for that big hook, hoping to ravenously consume all of the following episodes… but that never seemed to happen. Instead, we keep wondering when it will happen. But haven’t we already given it the benefit of the doubt far too many times, already?

Together, these characters may seem dysfunctional, but they move the main storyline forward easier. Apart, they feel like they’re flailing out in space, waiting for something to happen that’ll move the various plots along, but never comes. Their solo storylines were a big mistake by the writers and producers. These characters are not strong enough to have separate stories. At the beginning of Season 2, the possibilities were endless for the show as they plotted their course on a boat. But then, one by one, they started going their separate ways and the show started going downhill, quickly.

But Fear the Walking Dead can only get better, right? Well, not without its showrunners making some major changes. Killing off weaker characters is a start and keeping the whole crew together is another, but at the conclusion of the season finale, many were still separated, so who knows if this idea will even be approached for Season 3.

As a combination of being out of town and losing interest in the storyline, a major binge session was necessary in order to catch up with the final six episodes. The last two episodes were built on hope: hope of reuniting with family, hope for a better life… much like the hope of the audience this TV show will get better. This two-hour season finale was surprisingly full of tension and was quite enjoyable, however, the showrunners can’t keep killing off the best characters (Daniel Salazar) or abandoning them (Strand, Tobias) while focusing on the weaker ones (everyone else).

What have we learned so far?

First introduced as a “fixer,” Strand’s character has weakened, considerably, throughout two seasons, but according to Robert Kirkman on Talking Dead, he will have a large presence on Season 3. As if to interpret Kirkman’s dialogue, it felt like he was apologizing for basically pushing the strongest character into the background for the majority of Season 2, with promises of more next season. Doesn’t this logic sound familiar? “If you didn’t enjoy the TV show so far, come back! It’ll get better…”

Many online commenters have made their points loudly that Chris may have been one of the most unliked characters in the history of television. Sadly, we agree. His character was truly demented, hanging with the bro-migos of Apocalypse and eventually heading to the Dark Side. If ever there was an unrelatable character, this was it. Maybe that was the reason, for the first time in either Walking Dead series, a main character was killed off-screen (but eventually he did get a flashback).

The Rosarito Beach Hotel, used as a homebase for our survivors, but felt too much like the prison in The Walking Dead: It’s a self-contained area that’s protected, able to house plenty of supplies until a bad guy wanted in, bringing it all crashing down. Sound familiar?

It was great to see so many Hispanic actors appear onscreen throughout the season, but by the season finale, that goodwill bordered painfully on politics, as immigrants crossing into the United States were attacked by an unseen militia. Please keep the politics out of our pop-culture entertainment!

What’s next for the show? Will Nick and his villagers make it to the refugee camp north of the border? Will Madison, Travis and Alicia survive on their own long enough to find them? Where the heck is Ofelia and why did she bail on her friends? How many more unnecessary characters will be killed off before the series gets another overall reset, in another attempt to refocus? And why isn’t Fear expanding the franchise’s mythology, as promised by creator Robert Kirkman? The audience has definitely been given the bait and switch, with no payoff given. How are the two series connected? So far, we haven’t been given much information. Make it happen, Kirkman!

Apparently, 3.4 million total viewers tuned in on Sunday, October 2nd (including  2 million viewers in the 18-49 demo for a 1.4 rating), which is a 58 percent decline in the demo and 50 percent decline in total viewers compared to the season finale of the first season. AMC has yet to announce next year’s premiere date, but the 16-episode third season should debut next spring. Unless some major changes are made to the series, we may depart the show, like many others, before getting those origin answers.