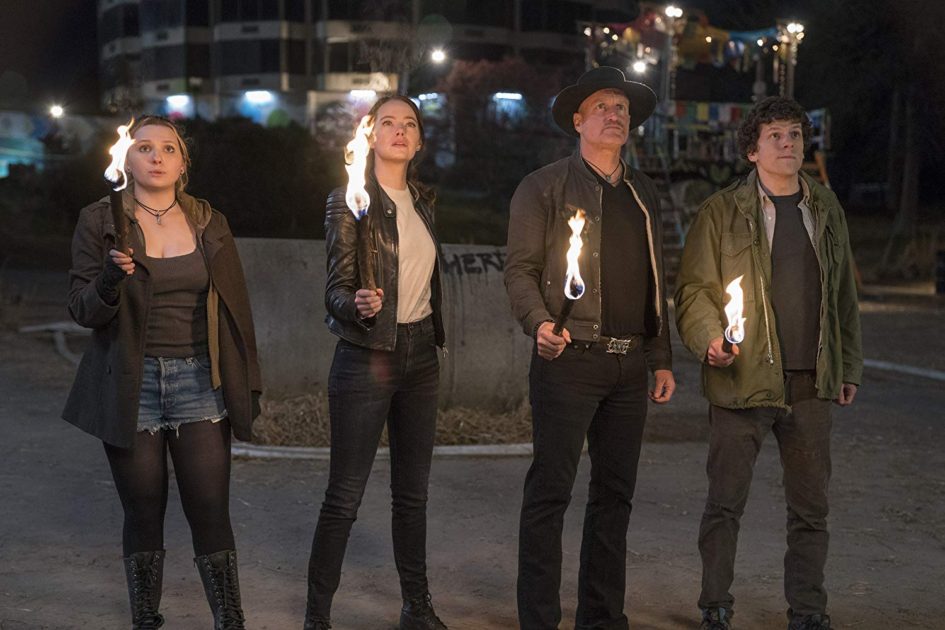 The gang's all back for another undead adventure in Zombieland: Double Tap!

Obviously, it’s time to nut up or shut up… again. I was extremely excited to watch the Zombieland: Double Tap teaser trailer that was released last week, but after rewatching it on multiple occasions, I’ve got four burning questions that must be asked about the upcoming movie.

Thankfully, no one was recast out of the four principal actors from the previous movie. The original crew returns intact, and the filmmakers are proud to boast that each of them has been nominated for an Academy Award — Emma Stone is the only actor of the bunch who has won the award; the Oscar voters obviously took note after seeing her great performance in Zombieland (That’s my belief and I’m sticking to it!).

With The Walking Dead nearing the end of the line for the TV show, Double Tap fully rejuvenates my interest in the pending Zombie Apocalypse and I can’t wait for it to get here, already!

Without the success of Director Ruben Fleischer’s Venom, as well as the boffo box-office returns of screenwriters Rhett Reese and Paul Wernick from their efforts in Deadpool and Deadpool 2, the possibility for a Double Tap would never have happened. Let’s hope that each of them brings their best efforts to the film and isn’t lazy about their jobs (unlike that Amazon pilot adaptation).

There’s no longer a mission to find the last of the Twinkies, but somehow our dysfunctional family adventures to D.C. and Little Rock has gone missing after picking up a hippie from Berkeley. That’s enough of a partial storyline to get us lined up for admission into the movie theater! But we’ve got four burning questions that still must be asked:

1.) What all-new rules for horror sequels will be written into the storyline? Will Double Tap take the Scream route by creating and destroying any more horror tropes? We can’t wait to find out!

2.) How many new characters are too many for one film? Clearly, we want to see more from our original group, but each of the newbies seems to have the same attitude as the original cast. Having too many people acting the same way might be a problem. Hopefully, there’s enough screentime for everyone involved to have meaningful arcs.

3.) What role will Bill Murray have in this sequel? After fans’ reactions to his original cameo, Murray’s return, in some capacity, was pretty much a given. And according to IMDb, he’ll return with another member of The Original Ghostbusters, Dan Aykroyd, which should be a hoot. Bustin’ Zombies makes me feel good!

4.) Is this movie arriving 10 years too late? Will the viewer feel the need to return to this Zombie Apocalypse, as opposed to all the others? Through the trailer, America’s more of a wasteland than a destroyed civilization, almost like everybody simply disappeared instead of transforming into killer undead monsters. From what we’ve seen so far, the country should be nearly trashed after fighting off the undead menace, not deserted. Seems odd.

And one bonus question remains:

5.) Where’s the Super Zombies? From reading past press releases, we will get a close-up view of the undead evolutionary process in this movie. Apparently there will be a variety of ghouls to destroy (much like in the Left 4 Dead video game franchise), which will get worked into the script somehow, but they aren’t seen in the teaser trailer… maybe they’ll pop up in the next one?

Zombieland: Double Tap returns to the big screen just in time for Halloween, on October 18!