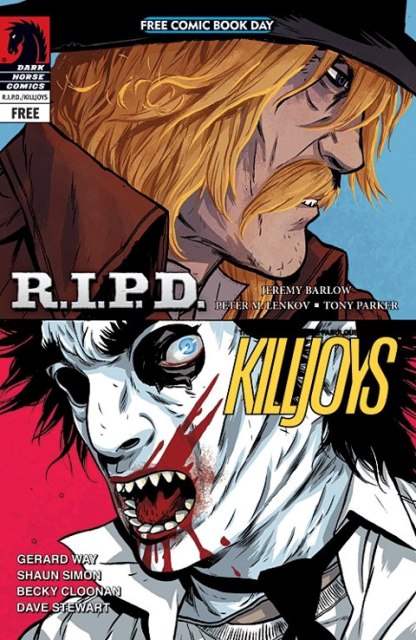 Although the story is only eight-pages long (filling out only 1/3 of the book), it splits pages with the vampire storyline of Killjoys and Mass Effect.

This comic does give the reader a very brief taste of the original characters, to be featured in the soon-to-be released supernatural movie, opening on July 19, 2013.

The upcoming film features Ryan Reynolds and Jeff Bridges as Nick Walker and Roy Pulsipher, undead employees of the Rest In Peace Division (R.I.P.D.). Having a police department full of dead officers who protect the living from spirits that refuse to move into the afterlife does sound interesting.

However, both Zach Galifianakis and Jodie Foster decided to drop out, due to “scheduling conflicts,” and its release date was moved back three weeks. Sounds like quite a few production problems that possibly mean upcoming bad news, for this comic-book based movie.

Notable Quotes:
– “For future reference, ghosts don’t like seances.”
– “I wasn’t ready to move on — not before I could really start living, y’know?”