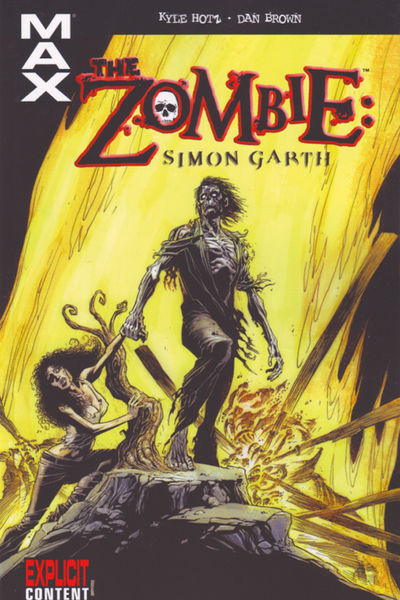 Regarding movies, I’m absolutely not a fan of reboots. But when it comes to comic book reboots…

The Zombie: Simon Garth is a 2007 sequel to The Zombie, Marvel’s reboot of that loveably undead character created by Bill Everett in 1953 and later reinvented by Stan Lee in 1973. With at least three different origin stories, you’d think this character would at least be well-rounded, right?

Not so fast, my friend.

Featured in Marvel’s MAX Comics imprint — which features explicit adult content — this reboot begins with an Army helicopter crashing in a forest, not far from a car wreck. The helicopter’s only survivors are Dr. Barnes, a Military Doctor hired to reverse-engineer a Level-8 virus to be used as a weapon, and Simon Garth, the Host carrying Virus-66, also known as a Zombie.

Simon Garth helps a lost child find her mother, while protecting it from the undead hordes. Does this mean he’s the very first Zombie with a heart of gold?

I’m not exactly sure why this character received a second reboot, erasing his past. It felt unnecessary, especially since I was enjoying reading the black-and-white comics of the ’70s featuring this backup character.

The only remaining theme from previous Simon Garth incarnations is his lack of communication skills.

Some of the secondary characters feel like blatant pop-culture ripoffs, such as the Big Mama character (strangely looks like Left 4 Dead’s Boomer) and human hero Sheriff Haupt (who looks and acts too much like Sheriff Rick Grimes, of Robert Kirkman’s The Walking Dead).

This was my very first MAX Comics experience, so I wasn’t expecting what I read. Featured prominently are rednecks, rape, drugs, stereotypes and spousal abuse. Most of it felt out of place, only there to create shock value. Not a big fan.

Unfortunately, I wanted more stories depicting ’70s Simon Garth, New Orlean’s Coffee King, the reanimated voodoo human sacrifice. Sadly, the walking weapon of mass destruction is all we get. And since this is the last major storyline featuring Garth (other than a minor role in Marvel Zombies 4), many others seem to agree with my assessment, as well.

Notable Quotes:
– “It’s a dang eh-pee-demick.”
– “This thing has Army screw-up written all over it.”
– “I think something very, very bad might be happening…”
– “Did it hurt? When the Wicked Witch threw a curse onto your face?”