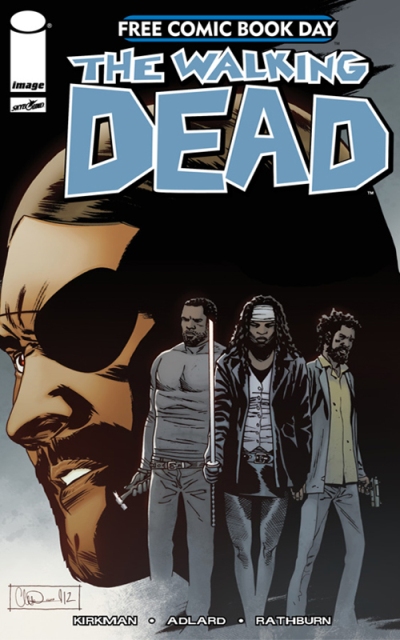 2013 offered possibly the best Free Comic Book Day ever. And the best of the freebies was Image Comics’ The Walking Dead. As a noob to Robert Kirkman’s graphic novels, I was excited to sample some of his original source material.

In this sampling, three short-but-sweet stories are depicted. Michonne’s backstory is told, along with her swords’ origins. The Governor depicts becoming someone who he is not… and explains the need for his fish tanks filled with severed heads. Tyrese gets the shortest stick of the bunch. His story is the shortest and least effective, detailing the need for using his hammer.

But the best of the bunch is spent with Duane and Morgan during Christmastime. There’s true heart and emotion on display, which is why I enjoyed his storyline the best. It’s also possible I really enjoyed the this storyline so much because the main characters have not had much airtime on AMC Network’s white-hot adaptation, The Walking Dead. Either way, I want to know more about Morgan and Duane.

Overall Free Comic Book Day 2013 was a smashing success. I picked up a handful of comics at just the right price to sample. But it was only The Walking Dead that piqued my interest enough to want to read (and ultimately, purchase) more.

Thank you, Free Comic Book Day! Just when I thought my comic book obsession had ended, you pulled me back in!