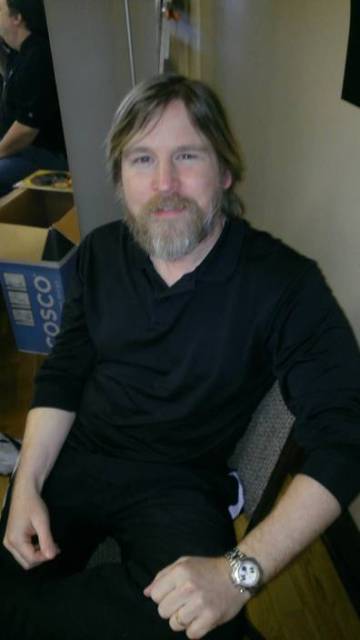 Per My Brother
Chance Bartels appeared at Rick’s Comic City on Free Comic Book Day in conjunction with Comic City Conventions to promote The Walking Dead in Nashville, TN. Chance speaks to us about working as a Zombie on the hit AMC TV show, attending Zombie School and a mistaken production disruption by President Obama’s entourage.

How did you initially get involved with AMC’s The Walking Dead?
– “I had to audition, from the get-go. I worked on the pilot, which was directed by the awesome, Frank Darabont. At the Zombie School — which is where we auditioned — we were judged on our performance, as well as our look. Greg Nicotero and Andy (one of the makeup men), as well as a choreographer, were our judges. There were three judges. It was like being on American Idol… we’ll call it Walker Idol. I don’t have the best look, because I’m short and stocky. They were really looking for people… like the look of the walkers in Robert Kirkman’s graphic novel: Tall and thin. They also graded you on your performance. So, luckily, I squeaked in.”

Did you attend Zombie School?
– “At Zombie School, they had us watch George Romero’s Zombies from Night of the Living Dead and Dawn of the Dead. In the group of about 35 people, they picked about four people to be featured. Fortunately for me, I was one of those chosen, to be featured in my group.”

What were your most memorable moments while working on the show?
– “One fun thing, for me, was eating the horse intestines in the pilot. And, I got to do a stunt, being shot by Merle Dixon, from the rooftop. I was the only walker you saw him shoot, in that episode. You heard shots going off, but I was the only one you actually saw on camera. I worked on other episodes in the first season, and I worked a little bit in the second season. It’s been fun, every moment on that set. And to work with Emmy-winning Makeup Artists, like the guys from KNBefx… it’s humbling, and it was a great experience, all around.”

Interviewing Kevin Galbraith, he had mentioned never attending Zombie School. I wonder why?
– “Well, he’s got the perfect look. He got to kill off a major cast member, so he’s got one up on me. I would rather trade. Kill a major cast member and have him go to Zombie School. (laughing) I love Kevin, and he’s got the perfect Walker look: tall and thin and he’s got these deep, big, sunken eyes. The makeup artists can go crazy, making him look really grotesque and gory. He’s really a phenomenal guy.” 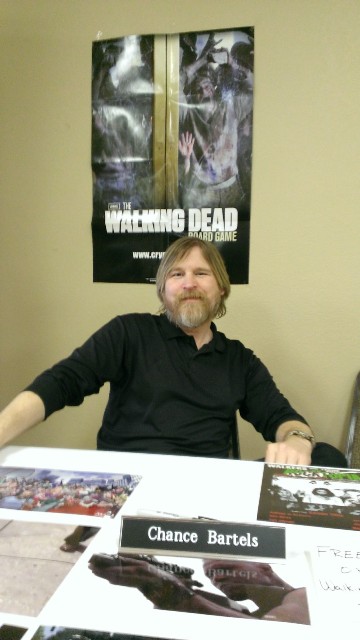 Do you have any stories to share involving the two former Showrunners?
– “No. I can just tell you that the first Showrunner, Frank Darabont, was very laid back. He’d always have a Hawaiian shirt on. Of course, he only directed the first episode, but he was on set a lot. I can tell you about an incident that happened during production of the fifth episode. The CDC set, which was actually shot at a place called The Cobb Energy Center. It’s a concert hall. The real CDC didn’t authorize filming to be conducted on their premises. They had a fake tank set up, and that night, President Obama was in town. The Cobb Energy Center is adjacent to I-75 and his entourage goes by. There’s a helicopter overhead, they see the tank and the dead walkers everywhere, and someone hit the panic button. Not only do local authorities come to the set, but you have Secret Service and State Patrol swarming the set, They briefly shut down the production. I don’t know what they thought, but I guess it’s better to err on the side of caution. That was really funny, to me.”

What are your current projects?
– “I’m working on a major motion picture, right now. I’m not supposed to talk about it, but I can tell you this: The main character’s favorite color is burgundy. It’s a comedy, it’s an ensemble cast with top-notch comedians, it’s wildly anticipated and it’s going to be phenomenal. I can’t talk about the details, but it’s hilarious. You’re going to laugh your ass off, coming this Holiday Season, 2013.”

What’s your favorite horror movie?
– “I’ve been a fan of the horror genre for a long, long time. You should see my library of films. I actually collect 16 mm and 35 mm prints from movie projectors. A lot of people don’t like slasher films, but I’ve always liked Friday the 13th Part III. It’s not Shakespeare; it’s not even great horror. It’s a childhood fond memory, for me. That’s what got me turned onto the horror genre, in the beginning. I love Dawn of the Dead. I would watch that religiously, I would rent that all the time. My favorite shot was the walker who got his head chopped off by the helicopter blades. That’s one of my favorite pre-CGI effects. It still holds up to this day.”

Will you be attending any conventions this year?
– “No. I don’t really do convention appearances. There will be one, I’m doing in June, but it’s a favor to a promoter-friend of mine. It’s a convention called Eyecon. It’s going to have Zombies from different types of movies and TV. It’s going to have Zombies from Night of the Living Dead — it’s not a Walking Dead convention. Jon Bernthal — who played Shane — is going to be there. Norman Reedus, Irone Singleton and some others from Season Three are going to be there.”