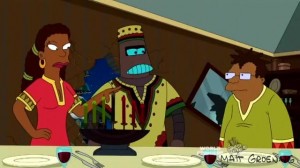 In the third and final (for now?) holiday-themed episode of Futurama, is a three-part anthology, Futurama puts an evil-little spin on the holidays: Xmas, Robonica and Kwanzaa. The first part focuses on celebrating with traditional Christmas trees, which, in the future, have become extinct. When the crew accidentally repopulates the entire planet with the trees, the results are explosive.

Bender teaches the virtues of Robonica — the holiest six and half weeks of the robot calendar — in the second segment. And by the time he gets to the traditional oil wrestling, he runs out of product, which leads the crew to dig for more petroleum oil and underground high jinks.

And in the final segment, Kwanzaabot makes a grand entrance, explaining the virtues of the holiday that trace back to its origin, 1,000 years ago.

In the future, pollution and over-harvesting of trees is a problem, just as it is now. Robots think they’re people and just want to celebrate holidays, too. And Kwanzaabot seems to be a black Kool-Aid man of the future. Hilarious. The only true evil monster of this anthology was the Giant Space Queen Bee.

I didn’t care for the anthology of holiday-themed stories. I prefer one main story, not three tiny ones, each rushed to finish before the next commercial break. While I didn’t care for the first two stories (although I did enjoy a basic story revolving around Robot Santa and Robonica), I wanted more details from each story, or more specifically, I want more specific details regarding Robot Santa and Robonica, the holiday in general.

The only thing that was decent in this anthology was having a story revolve around Kwanzaabot. While this character is generally teamed with baddies Robot Santa and Chanukah Zombie, he is not a bad guy. Hopefully, he can be a central character in a future episode.

Noteworthy Quotes:
– “If it’s real, how come there’s no song that explains how to celebrate it?”
– “We shall now begin the traditional oil wrestling.”
– “Yo, Boondocks. I’m talkin’ here. Put away the comics.”
– “Girl, those stank sticks are for single women and take baths.”
– “This could be the year without a Kwanzaa, like every year before 1966.”
– “Hooray! Kwanzaabot’s here to save… Oh, they killed him.”